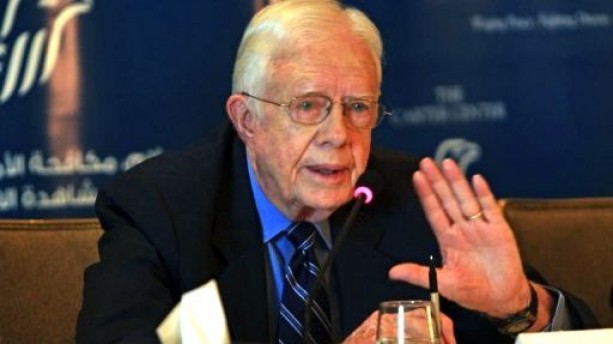 The Carter Center released a set of observations and analyses regarding the presidential elections, expressing concern at the political transition in the country and suggesting recommendations, and steps to be taken by the new president.

Former United States President Jimmy Carter, who co-founded the centre, was quoted as saying, “I am gravely concerned that Egypt’s democratic transition has faltered,” in a report released by the centre on Friday.

With the elections around the corner, the centre said in its 16 page report, that the “period leading up to the presidential election, the legal framework and the actions of the government have severely limited political freedoms, marginalised opposition groups, and prohibited free and open political participation.”

The report comes 10 days ahead of the presidential elections which are scheduled to be held on 26 and 27 May. Voting for Egyptian expats began on Thursday and will run until Sunday evening. Only two contenders are running for the seat: Former Defence Minister Abdel Fattah Al-Sisi and Nasserist politician Hamdeen Sabahy. The results are slated to be announced on 5 June.

It was released after an “expert mission” deployed by the centre analysed in detail the political and legal environment surrounding the upcoming presidential elections.

The American NGO, which monitors democracy and human rights said: “Egypt’s political transition has stalled and stands on the precipice of total reversal” as a result of the “oppression and exclusion of the Muslim Brotherhood,” the “crackdown on opposition and media across the political spectrum and the expanding limitations on fundamental political freedoms…” among other reasons.

The former American president believes that Egypt’s new president should “take immediate steps to foster dialogue and political accommodation to ensure that the full spectrum of Egyptian society can participate meaningfully in politics.”

Steps that the centre recommends in order to improve the country’s political environment include ending the crackdown on dissent, pursuing national dialogue and reconciliation and rescinding the controversial and heavily criticised Protest Law. Al-Sisi defended the law in an interview last week, while Sabahy vowed on Friday to amend the law.

The upcoming elections are governed by the 2014 Constitution which passed in January and the 2014 Presidential Elections Law (PEL) issued by Interim President Adly Mansour in March, both of which were scrutinised by the NGO.

The report said 2014 Constitution was “drafted quickly” and “without an inclusive process” and added that it “provided some important improvements to human rights protections, but undermined these improvements by formalising extraordinary privileges for the armed forces and the judiciary.” It recommends considering new amendments to the constitution to ensure “protection of core human rights and political freedoms.”

The report described the PEL as being “very similar” to that which governed the 2012 presidential elections, with some “provisions being identical.” “A main concern with the law, and a source of political debate and tension, is Article 7, which immunises the decisions of Presidential Elections Committee from appeal,” the report said, adding that this remained unchanged from the 2012 law.  The PEL was issued without any “direct consultation with political stakeholders,” the report said.

Additionally, the report stated that the PEL “contains a number of provisions that are unclear and open to an unacceptably wide range of interpretations,” such as addressing campaign tactics that threaten “national unity.”

For the sake of constitutional and legislative reforms, the centre also suggested passing a new parliamentary elections law “to promote strong parties and strong political representation.” Parliamentary elections are scheduled to be held after the presidential elections, but no date has been set so far.

The Carter Center oversaw the recent 2011-2012 parliamentary elections as well as the 2012 presidential election. For the constitutional referendum in January and the upcoming presidential elections, the centre deployed expert missions to analyse the context surrounding the voting. Accreditations for 10 people were approved in the most recent mission.