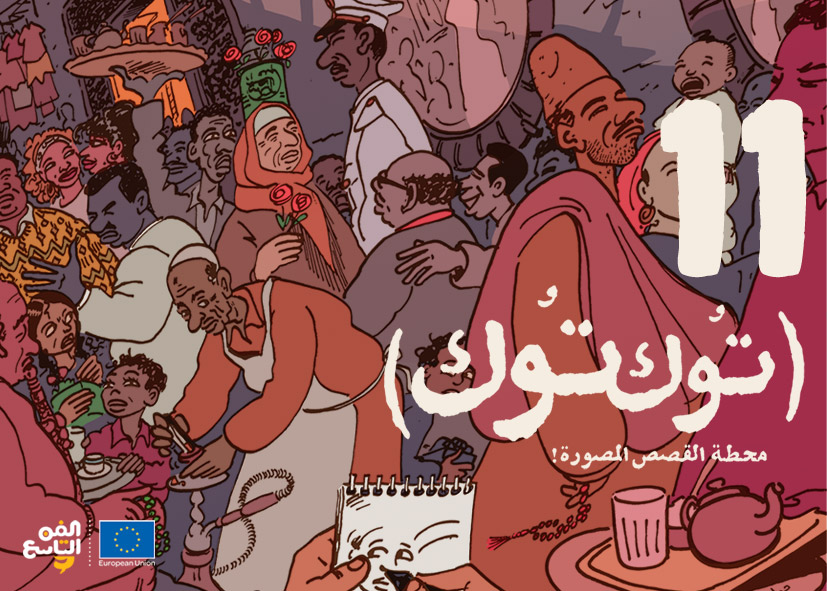 Celebrating French illustrator and artist Golo’s 40 years of work in Egypt, an exhibition in La Viennoise opened on 15 May to sizeable crowd. The exhibition celebrated the 40 years since Golo’s first visit to Egypt.

Along with Golo’s exhibition, the popular Egyptian comic, Tok Tok, launched its 11th edition featuring the artist’s work on its cover, and an essay on his life within its pages. The comic features leading Egyptian illustrators, such as Shennawy, Hefnawy, Andeel, and Tawfik, among others.

Golo focuses on everyday life in all of his illustrations. His work features scenes from street life in Cairo, including unique characters, political commentary, reinterpretations of Egyptian history, and humorous visual gags.

“The illustration was astonishing to me,” said Shennawy, who first encountered Golo’s work on a film poster in Downtown Cairo. “I could see the European school in the work, but at the same time it was not Orientalist.”

We had a similar experience walking into the exhibition.

The exhibition consisted of several rooms with different themes, such as Ancient Egypt. The work humorously depicted ancient Egyptians in modern Egyptian situations. In one piece, for example, an ancient Egyptian is pictured taking orders from clients at an ahwa, or coffee shop. Another reinterpreted a judgment scene from the ancient Egyptian funerary text, the Book of the Dead, through a modern lens.

Golo also tackles modern topics, with pieces illustrating former president Mohamed Morsi’s year in office and the dissatisfaction that led to his 3 July ouster. Other pieces provided amusing social and political commentary on the constitutional declaration in December 2012, the Port Said massacre, and the 30 June protests.

Prints, posters, notebooks, post cards, and mugs featuring the artist’s work were available for sale, as well as previous issues and posters of Tok Tok.

The exhibition, a fascinating look at Egyptian life, runs from 15 to 31 May.