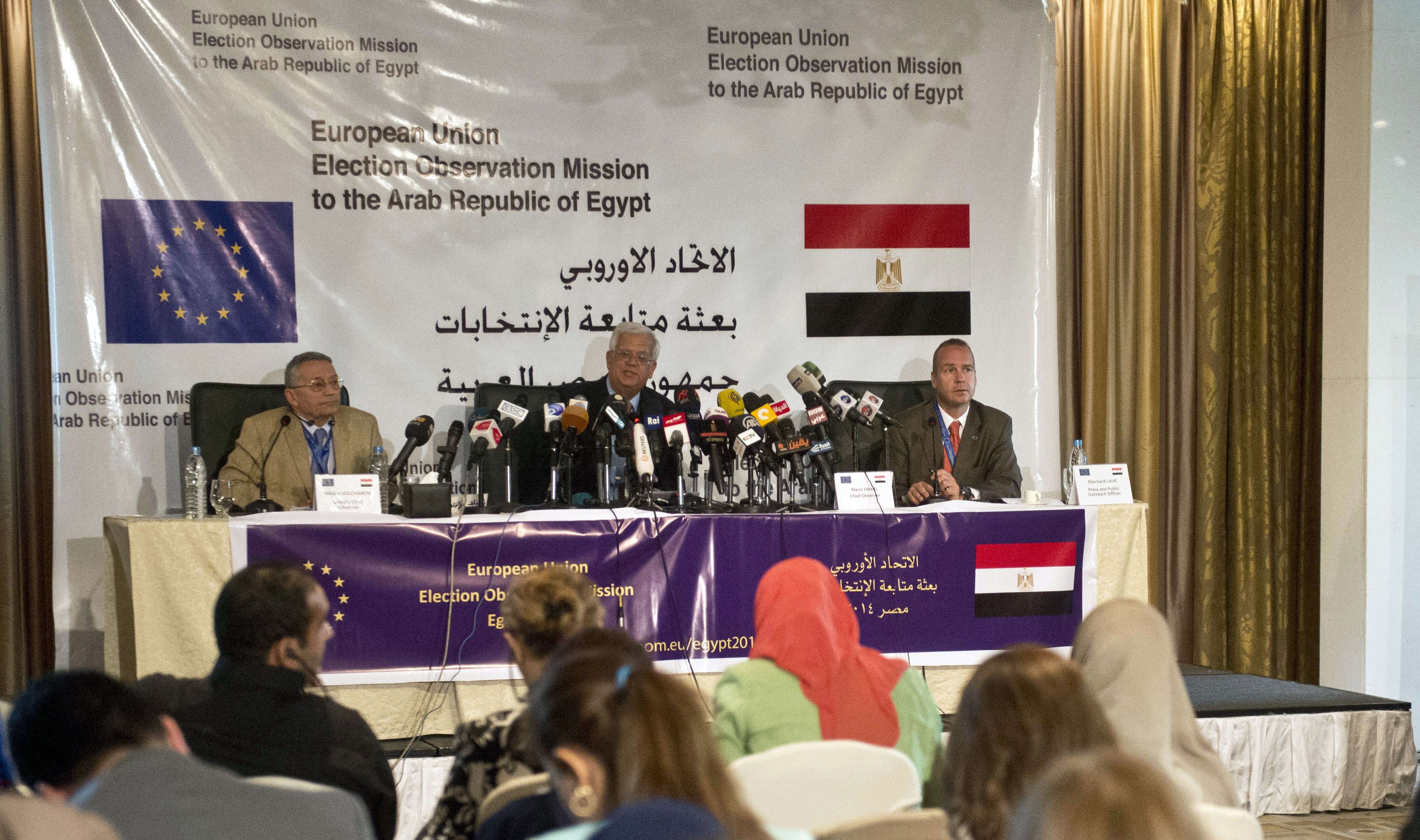 The European Union Election Observer Mission (EOM) for the upcoming presidential elections has reversed its decision to scale back its operation after “administrative challenges” were overcome, announced Chief Observer Mario David in a Monday press conference.

“Because of the delays, we need to adjust our mission in order to operate in line with our standard observation rules,” said David.

A core team of 10 election analysts arrived in Egypt on 18 April, followed by 30 observers a week later. The decision to scale back the mission to an Election Assessment Team, which was announced on Sunday, was taken after telecommunications equipment and medical kits were held up in customs.

David confirmed on Monday that the equipment had been released and was in the possession of the mission by Sunday night. He said “thanks to joint efforts and the constructive engagement of Egyptian authorities… the EU EOM is able to continue to observe the presidential election in Egypt as widely as possible throughout the country.”

Dr HA Hellyer, associate fellow at the Royal United Services Institute in London and the Brookings Institution in Washington, DC, believes the decision to continue to move forward with the full mission despite the delay “is a sign of how much [the EU] prioritises continuing a deep relationship with Egypt’s authorities.” He continued: “That in itself may indicate the importance of Egypt to the EU – due to its size, how it figures within the regional security paradigm, and Egypt’s overall geopolitical importance. No-one wants Egypt to fail.”

Egypt extended an invitation to the EU to observe elections earlier this year and on 13 and 14 April the EU and Egypt signed a memorandum of understanding to guarantee freedom of information and movement for all members of the EOM. The memorandum is not legally binding.

In response to a question regarding the methodology of the EOM, and if Egypt is a special case, David said: “There are no similar observation missions, each one is a particular case and each one has its particularities.” Election missions often begin 60 days before the date of the elections, to observe the climate leading up to the elections. David said the EOM began its work 45 days before the start of the election, pointing to the preparation work done by the core team and the 30 additional observers.

He continued: “We would have preferred that some of these 30 colleagues could already have been spread throughout the country so that they could already have prepared everything on the ground in the different governorates.” David said this would be taken into account when the EOM prepares its report on the presidential elections and stressed that he does not think “this jeopardises at all the credibility of our mission and the assessment we are here to do”.

Commenting further on the decision to continue with the full scale mission, Hellyer said: “The question is whether or not it works to the EU’s overall interest to push forward with the EOM – and it seems that those in authority in Brussels have made the determination that it does. There may be those in Brussels and other European capitals that may disagree – but the decision has been made.”

David also confirmed that he met with both presidential candidates, Abdel Fattah Al-Sisi and Hamdeen Sabahy on Sunday and informed them about the “difficulties” the EOM was facing. He said: “Both of them promised that they would try to do their best to ask the authorities to speed up the process.” He added that he did not think this was necessary due to the cooperation from the authorities and the Ministry of Foreign Affairs.

The ministry announced on Sunday night that all the “technical and administrative issues” had been overcome, and that the EOM would continue as previously agreed.

Other international observation missions approved by the Supreme Elections Committee are the Arab League, African Union (despite a freeze on Egypt’s membership), Arab Parliament, Community of Sahel-Saharan States, Organisation of the Francophonie and nations belonging to the Common Market for East and South Africa will also observe the elections.

The EOM will release a preliminary report on 29 May, just two days after the end of voting. The presidential elections are slated to be held on 26 and 27 May.