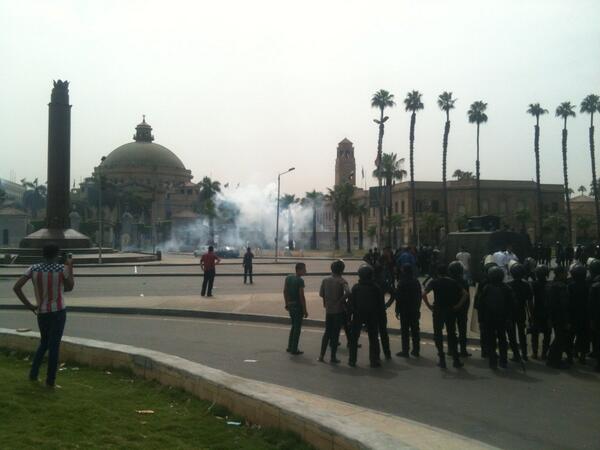 Clashes took place between security forces and Students Against the Coup (SAC) at Cairo University on Tuesday, leaving one senior student from the Faculty of Engineering dead.

The deceased, Islam Ghanem, had been suffering from an injured eye from clashes with security forces that took place during the first term, student sources said. According to a statement by the Ministry of Health, two students were injured and were transported to the university hospital.

Central Security Forces (CSF) were based outside the university campus and did not storm the university. Two military armored personnel carriers (APCs) were seen behind the CSF to “back the police force and secure the area,” according to the Commander who was leading the group of security forces.

The General leading the CSF outside Cairo University, who declined to give his name, claimed that the protesters were allowed to protest “even off campus” and clashes started when the students returned to campus and used fireworks against the security forces based outside. He also claimed that the protesters used a “pellet bomb” against the security forces.

SAC Female Students Coordinator at Cairo University who uses the pseudonym Maria confirmed that the clashes started after the protesters returned on campus, but denied that the students started it. She also said that “male protesters used Molotovs and fireworks to protect themselves during the clashes.”

Al-Azhar Universities also saw another day of protests by SAC, made up of supporters of former president Mohamed Morsi.

Following a drive-by shooting that took place in the early hours of the morning, which left three CSF officers dead and nine injured at Al-Azhar dorms, Salhen announced the group’s intention to “shortly pause” protests to avoid additional student casualties and detaintions.

“This pause does not mean that our protests will come to an end,” he said.

The Ministry of Interior spokesman General Hany Abdel Latif has previously said that there would be no more protests at universities and that security forces would interfere should university presidents authorise security forces outside campus to storm inside.