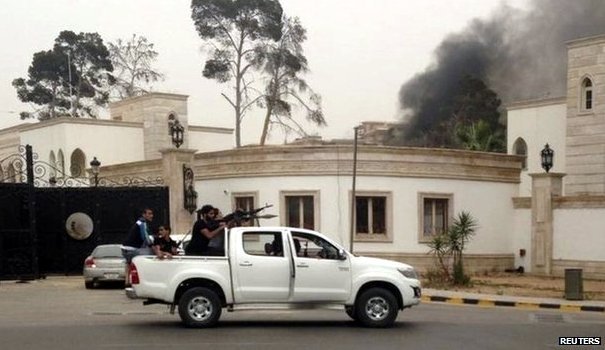 Egypt condemned on Monday “Libyan and foreign attempts” to involve it in the latest violence taking over the North African neighbour, which has left dozens killed.

In a statement released by the Egyptian Ministry of Foreign Affairs, the ministry addressed the situation in Libya, stressing that the Egyptian government and people are looking forward to an end to the “ongoing rift and the bloodshed”.

In an interview with Reuters last week, former Defence Minister and presidential candidate Abdel Fattah Al-Sisi referred to Libya as one of the security threats Egypt is facing, especially with regards to fighting terrorism.

Al-Sisi, who has enjoyed wide popularity after ousting former Islamist President Mohamed Morsi last July, is expected to win next week’s presidential elections. The former military general has adopted the rhetoric of staging a “war on terrorism” since he called on Egyptians to mandate the police and army to fight terrorism through holding demonstrations on 26 July 2013.

Libya’s government accused retired general Khalifa Haftar of staging a coup when he unleashed his so-called National Army on Islamists on Friday and led an offensive against Islamist militias in the eastern city of Benghazi using warplanes. The Friday violence left at least 79 dead.

Haftar defected from former Libyan President Muammar Gaddafi’s forces in the late 1980s, when he moved to the United States. He returned in 2011 and led the ground forces in the uprising against Gaddafi. He claimed his Friday offensive was done in an effort to cleanse Libya of terrorism.

The Libyan army announced a no-fly zone over Benghazi in reaction to the Friday violence. Algeria closed its embassy and consulate in Tripoli on Friday, citing “real and imminent threat”, while Saudi Arabia followed in its footsteps on Monday.

Egypt’s foreign ministry asserted the unity of Libya and stressed its rejection of any foreign intervention in the “brotherly” country, believed to be on the brink of civil war following Friday’s violence.

The ministry added that it is closely following with the situation of Egyptian nationals residing in Libya. It set up an operations room to take any requests, inquiries or calls for help from Egyptians in Libya.

Tensions between Egypt and its troubled neighbour Libya have been on the rise recently as a string of killings and kidnappings has targeted Egyptian nationals.

A militia blocked on Friday the international road between Tobruk and Ajdabiya, affecting a number of Egyptian drivers who remained trapped in their trucks for almost 24 hours.

Within a period of four days in late March, two Egyptians were shot and killed in Benghazi. Earlier in the month, another Egyptian national was gunned down in the same city.

Egypt has issues and reiterated a travel warning for citizens travelling to Libya. Egyptians are advised not to travel to Libya unless it is absolutely necessary, and to travel by airplane not road only “after obtaining a valid visa issued by the Libyan embassy in Cairo”.

Fahmy received assurances in March from then Libyan Prime Minister Ali Zeidan for the safety of Egyptian expatriates in Libya.