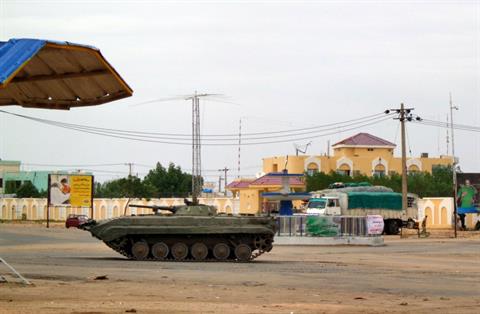 AFP – Fighting erupted in a city in Sudan’s Darfur Tuesday, killing four people and ending an uneasy calm after the region’s worst unrest in a decade, residents and a medic said.

“They are fighting inside El Fasher town – heavy fighting,” one resident told AFP by telephone, adding that he could not identify the combatants, although some were in uniform.

Continuous gunfire was audible over the phone line as he spoke.

A medical source said the bodies of four people were brought to hospital in the town. Three of the dead were “soldiers” but it was not clear from which force. The other victim was a woman, the source said.

Another El Fasher resident said the shooting started at about 4.00am (0100 GMT) in the east of the town, and was continuing.

“I heard the sound of heavy weapons,” the resident said.

Fighting had also been reported in El Fasher on Monday.

In early April, El Fasher residents said that the town had been gripped with fear for a month, since government-linked paramilitaries arrived.

They said the hard-faced men were “shooting for no reason” and had a strong presence in El Fasher’s east side.

Residents claimed some were from the Rapid Support Forces, a counter-insurgency unit that the head of the UNAMID peacekeeping mission in Darfur said had “perpetrated attacks on communities”.

The RSF were of “particular concern” but rebel offensives, criminal activity and inter-communal fighting over access to resources also contributed to an “alarming escalation of violence” in Darfur, the UNAMID chief Mohamed Ibn Chambas said in early April.

Violence throughout the region, which is about the size of France, was at its worst in 10 years, and had displaced about 300,000 people from late February to mid-April before unrest began to ease.

Commanders of the RSF last week denied committing abuses in Darfur and said the unit was “on holiday” after completing its Darfur mission.

Similar government-linked units and militias remain in the region, but Khartoum has had difficulty controlling them in the face of mounting economic problems since South Sudan broke away in 2011.

Rebel-government battles are no longer the main source of violence in Darfur, where insurgents from ethnic minority groups launched an uprising against the country’s Arab elites in 2003.