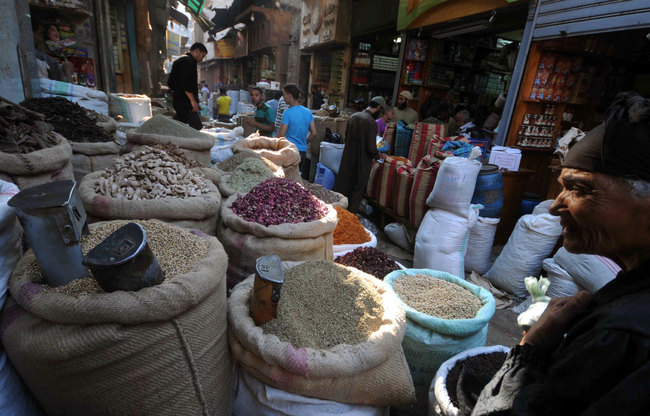 The seasonal boost in food sales during Ramadan will not be enough to outweigh the political crisis driving Egypt’s current recession, according to Jalal Imran, Vice President of the Food Division of the Federation of Chambers of Commerce.

“Market rates are stable for sugar, oils, and flour, but this is not the case for dairy products whose price will increase by 5%,” He said.

Imran attributed the stabilisation of prices during the coming Ramadan season to the presence of large quantities of food stored by merchants who cannot unload them due to the current recession..

“The majority of the items exist due to the recession which has impacted sales by approximately 65 percent, which in turn has affected the capital cycle of merchants and manufacturers simultaneously,” Imran said.

Last week, the price of the dollar exceeded EGP 7 while the parallel market price reached EGP 7.7, representing another burden for imported food commodities in the months to come.

Sami Mahmoud, head of sales at Nile Markets, said the company had begun distributing foodstuffs such as Yameesh, rice, flour, and juices into its branches.“We expect strong sales movement during the month leading up to Ramadan,” Mahmoud said.

In light of strong sales, the company’s revenue will increase to EGP 80m this season, up from EGP 40 million at the same time last year, he added.

Ahmed Jaafar, head of the Fish Division at the Federation of Chambers of Commerce, said that the month of Ramadan will be a climax for fish production in Egypt’s farms, and this peak will continue for three months beginning in June through the end of September.

According to Jaafar, Egypt consumes approximately 1.2 million tonnes of fish annually, most of which originates in fish farms due to low catches throughout the past ten years.

He mentioned that demand for fish during the first ten days of Ramadan is very low, but rises by about 20% thereafter throughout the rest of the month, with a price increase hovering between 15 and 18%.

He added that he expects the price of fish will reach EGP 15 for Tilapia, EGP 28 for Buri, and EGP 10 for Mabrouka, while egg prices will range between EGP 10-20.

“Demand is supposed to increase during the holy month of Ramadan, but this year is unlike previous ones due to the consumer’s low purchasing power,” said Ahmed, a butcher in the Sayeda Zeinab neighbourhood in central Cairo. “The price of a kilogramme of veal meat currently costs EGP 70 and will rise in the coming weeks, as prices currently range between EGP 45-55.”

Mohammed Al-Saidy, a retailer and vegetable salesman in Maadi, said that despite the high prices for fruit and vegetables during the month of Ramadan, he did not expect to see a growth in sales because “the customer does not have sufficient funds to cope with price increases.”