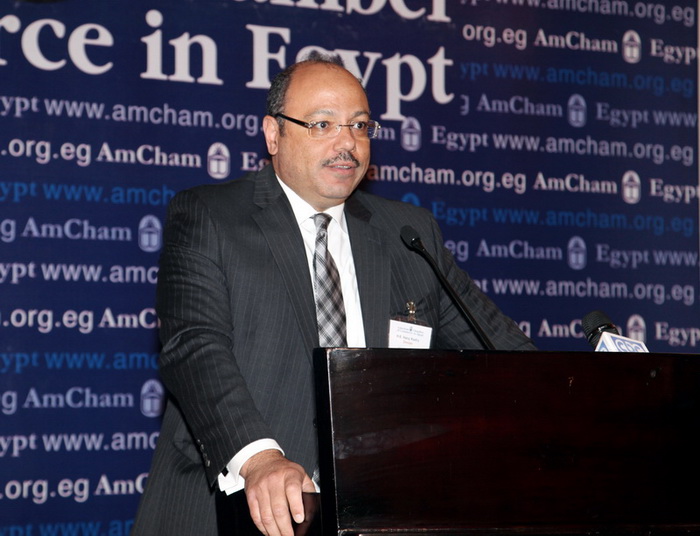 Minister of Finance Hany Kadry Dimian discussed different aspects by which he can control the budget deficit during the American Chamber of Commerce conference on Tuesday.

Dimian discussed during the conference issues with controlling the budget deficit. The estimates for the deficit in FY 2015 register 14% of the gross domestic product (GDP), which is “huge”, he said adding that the ministry “will not let this happen”.

He stated that “excluding the generous support from the Gulf countries”, the budget deficit has ranges from 14.8% to 15% of GDP in 2014. He added that with the generous support it was reduced to range from 11% to 11.5%. He also said that the ministry is working hard to maintain the deficit and reduce it below 11% but this will require everybody to “share part of the burden”.

The minister stated that tax revenues, excluding those collected from the sovereign entities of the Central Bank, Suez Canal Company and Egyptian General Petroleum Corporation (EGPC), constitute “only 8% of GDP”. The ministry aims to increase tax revenues by encouraging the Tax Authority to “contain tax evasion”.

According to Dimian, an improvement in the management of the treasury and public utilities will help control the budget deficit.

He said that promoting growth is important to investors and the Egyptian people, which can be achieved through the introduction of stimulus packages. The government aims to provide stimulus packages to the “most promising sectors of the economy” in the private sector, the minister said, which include telecommunications, tourism, housing and manufacturing.

The minister also discussed reforming energy subsidies, which “would overcome part of the [budget] deficit”. He added that he would tackle the issue through pricing adjustments, quality control and ensuring that there is a sufficient level of diverse energy sources in the country.

He added that certain solutions will take time, “so bear with us”, he said, addressing the Egyptian population.

The measures the ministry plans to take will “help control the huge build up of energy subsidies and problems associated with capital allocation”, Dimian said. He added that an exact date for implementing the subsidies had not yet been determined.

Alia El Mahdy, former Economics Professor at Cairo University and economic analyst, said that reducing the budget deficit to 11% “is not a very good target”. One of the reasons that citizens protested against the Mubarak regime, she said, is because of a high budget deficit, which registered 7.9% at the time.

El Mahdy attributes the “very high” budget deficit rate to government mismanagement. Reforming the energy subsidies will negatively affect the poor, and increasing tax revenues is “a double edged weapon that may drive away the only sector that enhances the economy and provides job opportunities for people”.