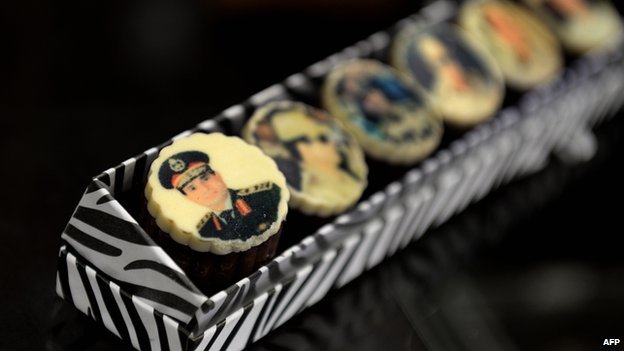 The last thing any bride wants on her special day is a mundane wedding that no one remembers. It is photographer Salah Ez El Din’s job to make each and every bride feel special.

“Right now,” he said, “Everyone is talking about Sisi.” What if, he thought, he could help brides integrate that excitement into their weddings?

Since former president Mohamed Morsi was ousted on 3 July, paraphernalia celebrating Al-Sisi as a sort of saviour for Egypt has been proliferating. The country’s obsession with the defence minister turned presidential candidate has infiltrated fashion and food. Egyptians can now buy chocolates, jewellery, and even underwear decorated with his likeness.

Less than a week before the country’s presidential election, the Al-Sisi mania has reached a fever pitch. There are Al-Sisi banners everywhere with the military strongman’s face photoshopped onto doctors, lawyers and engineer’s bodies; some are choosing to turn this trend of current times into an indelible memory of their lives through their weddings.

Al-Sisi-themed chocolates are little more than a joke on Bassem Youssef’s hugely popular show. Al-Sisi jewellery can be thrown away and forgotten when the fad passed. Al-Sisi themed wedding photos, however, will be hung in the house forever.

Ez El Din argues, however, that the phenomenon isn’t a passing trend. Brides see it as a way to make their weddings stand out, he said.

The first time he suggested the idea to a bride was during the military-imposed curfew following Morsi’s ouster, he said. “The army was playing a much larger role in public life,” he said. Since then, he said, the idea has taken off, with more and more women requesting to integrate the military strongman into their special days. “People want to show more support now that he is running for president,” he said.

In some weddings, brides have chosen to dress their bridesmaids in Egyptian flag-themed dresses and have them carry framed photographs of Al-Sisi, he said. In other weddings, the men dress up in army officer uniforms. Some brides make their grand entrances to the popular patriotic songs such as Hussein Al-Jassmi’s recent Boshret Kheir.

Ez El Din sees this as a trend that will continue so long as public opinion is with Sisi. The most important thing, he says, is not to make it corny or offensive.

“We mean this as a tribute to the army and to Al-Sisi,” he said. “We have to do it with class.”

8 banks participate in financing of ‘Boshret Kheir’ for SMEs