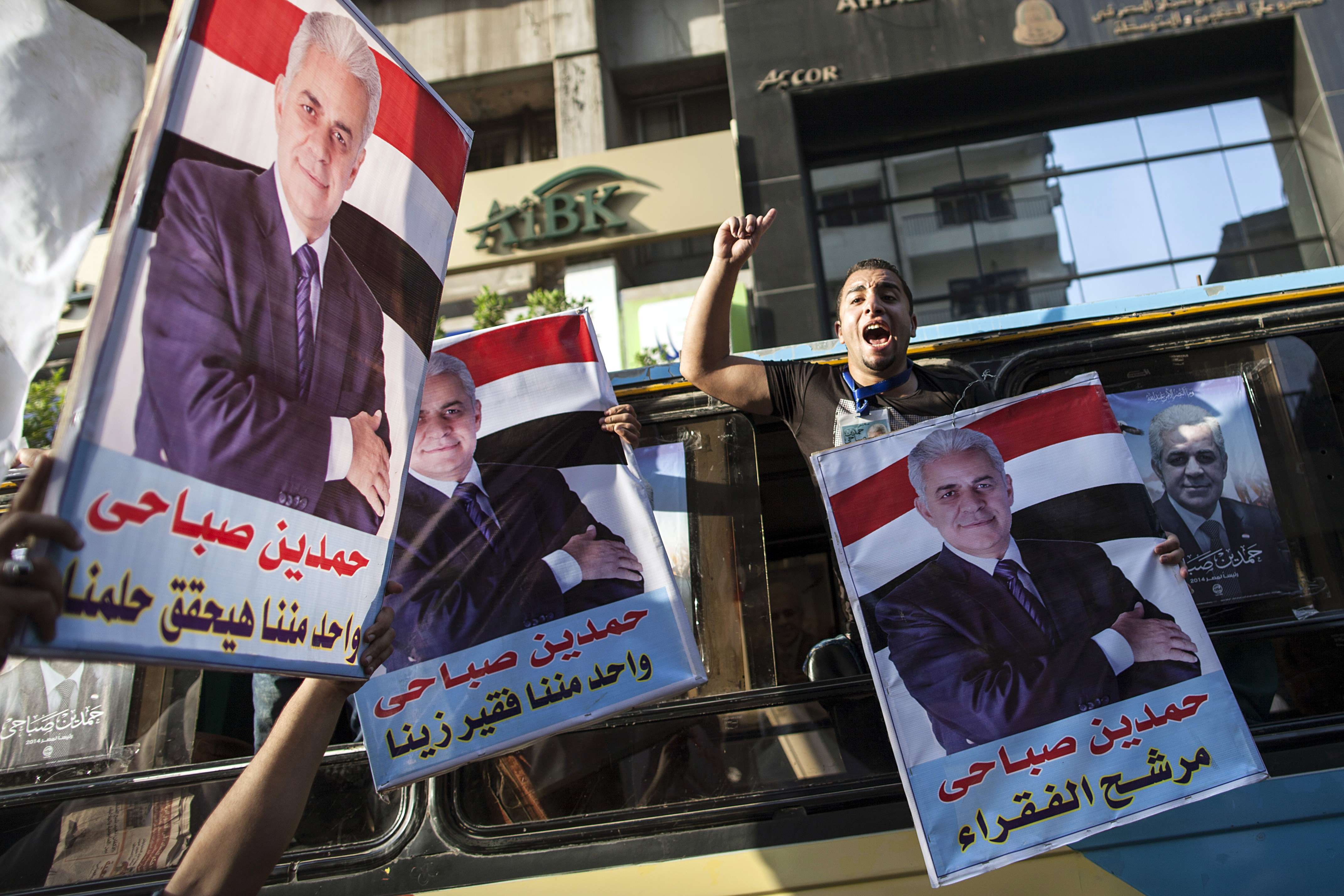 Presidential candidates Abdel Fattah Al-Sisi and Hamdeen Sabahy officially terminated their campaigns on Friday, the last day before the two days pre-elections silence, stipulated by Article 18 of the Elections Law.

“The electoral campaign shall commence from the date of announcement of the final candidates´ list, and shall last until two days before the date set for voting,” the article states.

Sabahy’s campaign organised a rally in Abdeen Square in Downtown Cairo on Friday. The rally was attended by public figures endorsing his campaign and supporters. Afterwards, Sabahy appeared on Yousri Fouda’s show on ONtv to talk about his platform.

Al-Sisi appeared in a shared televised broadcast with five private owned satellite channels and made a statement that was broadcasted twice; once before his interview, and again after his interview was done. In his statement Al-Sisi congratulated Egyptians on participating in the expatriate voting.

He called upon voters inside Egypt to participate in the elections regardless of their vote, calling the elections “a manifestation of the will of the Egyptian people”.

During the last rallies, Daily News Egypt spoke with some of the supporters of both candidates asking them about the reasons for their support.

When asked how the results of the expatriate vote – 94.5% in favour of Al-Sisi – affected the campaign, Sabahy’s campaign spokesman Maasoum Marzouk said: “We will proceed no matter what. Sabahy is the only candidate who will win in both cases. He ran a campaign with integrity and proved that the youth are capable of formulating and communicating an electoral platform with a clear vision.”

Marzouk added that if Sabahy loses, the campaign members and Sabahy himself will be protected from political persecution by the people. “Sabahy was detained 17 times and this has not discouraged him from pursuing his dream,” Marzouk said.

Ahmed Abdel Moniem, physician and novelist, said he finds it “unlikely that Sabahy wins, especially since the media and state institutions are supporting Al-Sisi and misinforming public opinion.” He added that he perceives the vote coming down to either endorsing the democratic camp or the police state, and a reason for which he said he plans to vote Sabahy despite not agreeing with his entire platform.

Mohamed Ashmawy, a high school student and a member of Al-Dostour Party, said: “Sabahy is the last hope for this revolution. I am voting for him because he would represent me and because he has a platform and a vision, unlike his opponent who only has ‘retinue’ and supporters.”

A school staffer called Sayed Abouda, 55, who called himself “the most famous Tahrir revolutionary”, said he would vote for Al-Sisi because “he saved Egypt from the Muslim Brotherhood.”

Nagat Hassanien, mother of one of the casualties of Ramses clashes in July 2013, said that she would vote for the Field Marshal because she believes he would protect the right of the “martyrs” including her son. Hassanien said that Al-Sisi is the only one capable of “cleansing the country of traitors.”

Production chef Ossama Rashed Fahmy, 39, shared his respect for Sabahy but said that he would not vote for him because he is “not qualified” at this stage.

Om Hisham, a house wife who had once supported ousted president Mohamed Morsi because she was under the impression he was “a pious man”, said that she was not bothered that Al-Sisi did not share his platform and she felt confident about a military man following the footsteps of Egypt’s second president Gamal Abdel Nasser.

She did, however, admit concern that a number of figures supporting former president Hosni Mubarak are also supporting Al-Sisi, which she said she would protest if Al-Sisi “does not get rid of them.”