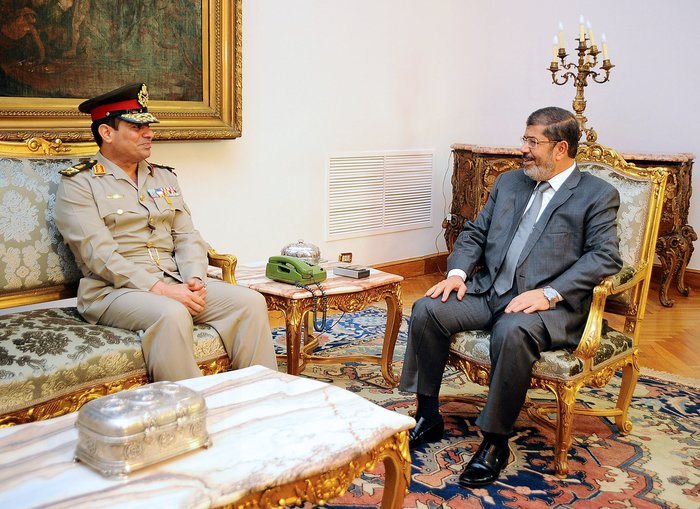 The next president, which many expect to be former defence minister Abdel Fattah Al-Sisi, will however have a greater opportunity to work together with state agencies, the economic experts said.

The now-imprisoned former president Mohamed Morsi assumed the presidency in July 2012 with a balance of foreign exchange reserves of $15.5bn leftover from the military council-ruled period that preceded him. This declined in Morsi’s first month to $14.4bn.

Reserves fluctuated during his presidency, peaking in May 2013 at $16bn, and dropping to $14.9bn amidst the intensifying demonstrations rejecting his rule.

Although reserves have been growing since the second half of the current fiscal year, the largest proportion of current reserves stem from deposits from foreign countries, according to the governor of the Central Bank of Egypt (CBE).

“The next president has to really bring out the economy’s latent potential,” said Reda Al-Adel, a professor of economics at Ain Shams University. The president must address the distortions in the current economy by increasing tax revenues and merging the informal economy into the formal system, according to Al-Adel.

The next president is inheriting a frail exchange reserves balance, which once stood at $33bn, but has declined now to less than $18bn. This makes structural reform in the economy inevitable to attract foreign investment and stimulate domestic investors, Al-Adel said.

According to the Ministry of Finance foreign direct investment (FDI) during the last fiscal year was $5.18bn and during the first half of the current fiscal year reached approximately $2.8bn, a growth of 14.8%.

The government hopes to attract between EGP 3bn and EGP 5bn of foreign investment by the end of the current fiscal year, according to the former minister of investment, Osama Saleh.

Moataz Raslan, chairman of the Canada Egypt Business Council, said: “The government needs to remove all obstacles currently crippling their ability to attract foreign investment, whether the lack of transparency, the bureaucracy or, above all, the absence of security in the street.”

Raslan explained that over the last period suspicion has been rising among foreign investors about Egypt’s investment environment as court proceedings challenge projects that had already been sold. “It’s up to the government to respect its contracts,” said Raslan.

Interim President Adly Mansour recently approved amendments to the Investment Law stipulating that “the right to appeal contracts is limited to the state and the contracting party.”

The law has been criticised for not determining whether projects whose contracts were terminated before the law was issued will be able to benefit from the amendments. Ibrahim Al-Ashmawy, adviser on investment to the ministry of tourism, said: “In no circumstance can Egypt afford to lose its investors.”

He added that the state can attain its rights in many ways, but entering into conflicts with investors and resorting to international arbitration will ultimately hurt the state’s reputation.

The chairman of the Egypt Canada Business Council said that tightening oversight of the markets and including the informal sector into the economy are decisions needed to achieve a strong economy.

During the previous fiscal year and since Morsi’s presidency the pound has lost 15.8% of its value, according to official prices.

By the end of last week the exchange rate reached 7.12 pounds per dollar. It is expected that the Central Bank will allow the rate to float between 7.20 and 7.25 pounds.

Salwa Al-Antari, the former head of research at CBE, said that the continuing decline in the value of the pound against foreign currency, whether since Morsi assumed power or during the present time, will not be in the interest of the economy.

She added that the next president needs to work to support investment projects. Both candidates have incorporated this into their programs. Al-Sisi’s program depends on giant national projects, while rival Hamdeen Sabahy is looking to adopt small and medium-size enterprises.

“The next president needs to reduce external debt that has come about due to borrowing,” said Al-Antari.

External debt during Mohamed Morsi’s presidency rose 25.6% by the end of June 2013, reaching $43bn, in comparison to $34.4bn before he took office.

The Ministry of Finance announced that total external debt at the end of December 2013 stood at $45.7bn, accounting for approximately 15.5% of GDP.