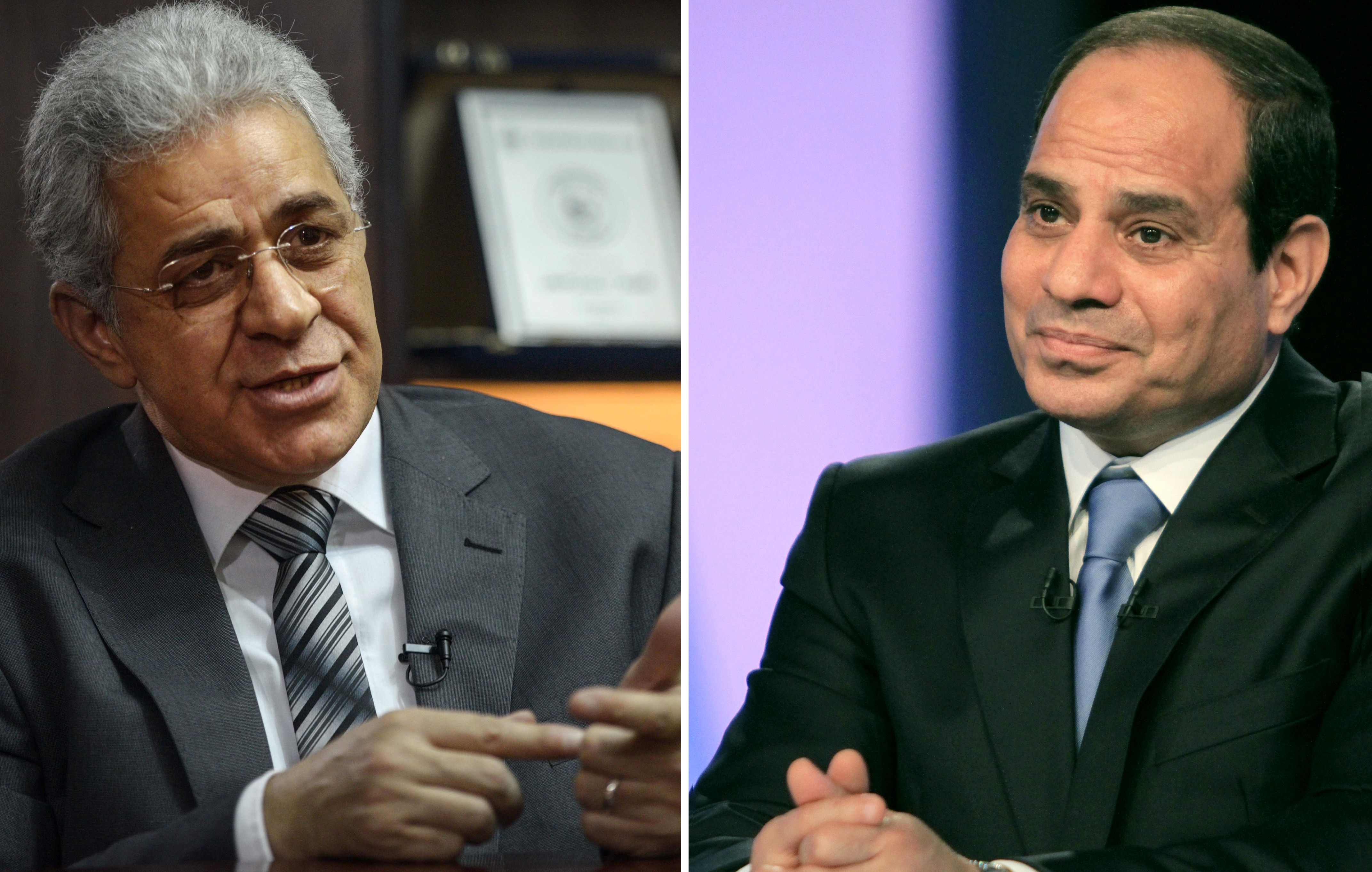 Al-Sisi said issuing the Protest Law was a necessity and a demand. He added that “irresponsible protests could lead to the collapse of the nation”.

Sabahy has long criticised the Protest Law and vowed to amend its “flaws” in a manner that would “regulate, rather than ban, protests” should he become president. He also vowed to pardon all “prisoners of conscience”.

Al-Sisi said he is open to issuing an anti-terrorism legislation, adding he will do “whatever it takes to restore security”.

He also admitted that the anti-terrorism military operations in Sinai sometimes kill civilians, adding that their families receive compensation.

He believes that Egypt is also facing terrorist threats from other regional neighbours, such as Libya and Syria. He calls on the international community to support the region in its fight against terrorism, especially the United States.

Sabahy has repeatedly pledged to fight terrorism. He believes that the best way to fight terrorism would be through the enforcement of social justice, since the former is triggered by poverty and social problems.

Freedom of speech and media

Al-Sisi stresses that practicing freedoms should be balanced with national security, citing concern that the former might lead to chaos.

Sabahy vows to preserve “media freedom” and promises that under his reign, the media will be independent from the state and would exercise its role in raising awareness.

On the future of the now shaky Egypt-United States relations, Al-Sisi vowed to deal with all countries “for the sake of our nation”. He dismissed suggestions that the US is supporting the Muslim Brotherhood in Egypt.

Regarding the US military aid to Egypt and its suspension last October, Al-Sisi said that its effect would be “long-term”.

Al-Sisi said his foreign policy would be based on widening Egypt’s options, insisting that restoring ties with Russia does not mean he will be replacing one ally (the US) with another (Russia).

Al-Sisi said that the peace treaty with Israel is and shall remain “stable”, adding that parties in the region should build upon that reality to create a Palestinian state.

Sabahy believes Egypt does not need US military aid, which could affect Egypt’s choices. While he will accept military aid based on mutual benefits, Sabahy said he would turn down military assistance “used as leverage against Egypt”.

Sabahy reiterated his respect for the peace treaty with Israel, yet added that, should he become president, he would work on amending it in a manner that would allow Egypt to move with more freedom within the Sinai Peninsula.

Under his rule, Sabahy said the Muslim Brotherhood would neither exist as an organisation nor as a political party because it is unconstitutional for parties with religious reference to exist. Yet, Sabahy promises that the Brotherhood’s peaceful members would be treated as citizens according to the rule of law.

Al-Sisi denied he was the armed forces’ representative or that the military has ruled Egypt at any point in time during the past 60 years.

He said the armed forces’ main responsibility is to fight terrorism, yet stressed the institution would be ready to pitch in should its economic assistance be needed.

Sabahy stressed that the army “must not rule”. He believes the armed forces’ role is

to “protect and safeguard freedom, security and the country.”

Al-Sisi has long stressed that he “loves the Egyptian woman” and sees her as an integral part of Egypt’s development.

In order to do that, Al-Sisi’s vision for the country, should he become president, dictates that “women are liberated from any wrong interpretations of religious texts” and any cultural norms that could allow for discrimination against them”. Al-Sisi added that he would make sure women are fairly represented in parliament

In his electoral platform, Sabahy promised he would provide 500,000 women in “dire financial need” with social security. He said he would make sure female representation within parliament would be no less than 30% and that he would appoint women among his presidential team.

Al-Sisi’s electoral vision vaguely addresses the judiciary. He calls for holding a “justice conference” to achieve judicial development. The vision fails to address exceptional trials, such as military trials.

Sabahy’s platform addresses judicial independence, saying it can only be achieved if the judicial authority is independent of the executive and legislative authorities. The platform also details the mechanisms of appointing the prosecutor general, saying he should be elected by the Supreme Judicial Council.

The platform also highlights the necessity of cancelling exceptional courts such as the State Security Court; it adds that military tribunals should only try military personnel.

Al-Sisi said there are two points to the issue, the period it will take to fill the reservoir and the collateral damage of building the dam. He added that understanding between nations is not achieved through threatening and said that if need be, he will visit Ethiopia several times, not just once.

If elected president Sabahy intends to make his first trip to Sudan and Ethiopia and that he will call for a summit of the “Nile Family,” a reference to the Nile Basin countries. During the summit, an Egyptian suggestion will be proposed to form a new regional organisation with a mission of holding joint dialogue on guaranteeing rights of all Nile Basin countries. He added that this means that Egypt will not lose a drop of water and Ethiopia will not be deprived of a single volt of electricity that it needs.

The police have been in an extremely difficult situation for the past four years and this requires understanding and support, Al-Sisi said.

He said that there is a need to understand that during “security confusion”, some violations happen. He said the police exert a lot of effort, and that “we” need to morally support them and provide them with equipment, training and anything they demand. He added: “We want to achieve security by supporting the police and without violating human rights.”

Sabahy said “reforming the interior ministry means making it more competent and standing by it and it does not mean being tolerant to it.  He said that this will be achieved through: making “serving the people and respecting them” the ministry’s doctrine; restructuring the ministry; respecting human beings and general freedoms and including this in education curricula and comprehensively reforming state institutions. “When citizens are assaulted, this signifies the state’s weakness and inability,” he said.

“I have never discriminated against someone based on their religion,” he said. “We, Muslim and Christians, are the children of one culture, which we have built together for 14 centuries on this land,” Sabahy said.

His platform includes forming Commissioner for Combating Discrimination, as stipulated in Article 53 of the 2014 Constitution. He said however, that the commissioner is on the top of his agenda, not because it is in the constitution but because he is calling for it.

Both presidential candidates addressed the proliferating phenomenon of “street children” and agreed that the rehabilitation of such children would require cooperation with civil society organisations.