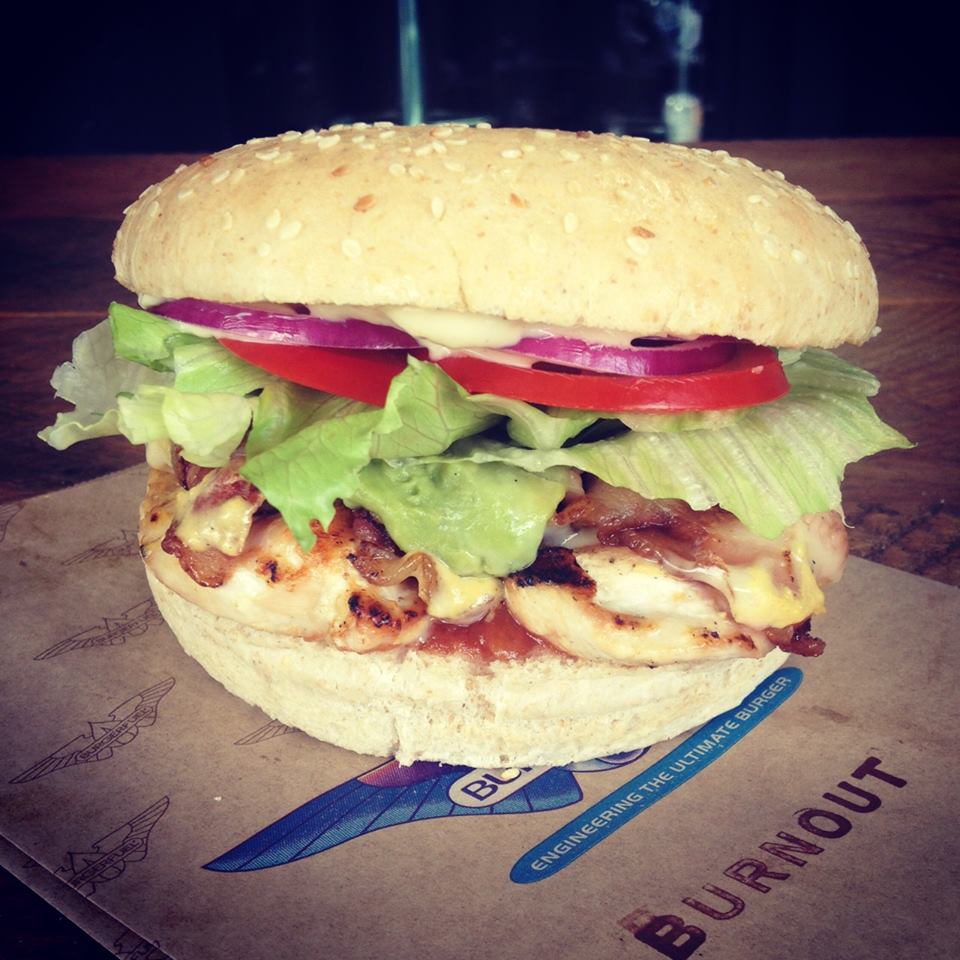 It’s not every day that a new gourmet burger chain opens in Cairo, much less from New Zealand. BurgerFuel has brought the craze from Zamalek to Maadi’s Road 9.

Famous for its use of aioli sauce, BurgerFuel uses 100% pure grass-fed beef from New Zealand and exports to its 59 locations in Australia and around the Middle East. The chain has no qualms about serving up greasy, fatty deliciousness, but also offers healthier alternatives to the traditional red meat and fries combo in the form of vegetarian and vegan options approved by the Vegetatian Society. It is known for a cardboard invention called a ‘doofer’, which holds your burger in place so it doesn’t drip all over you.

As soon as you walk into the place you notice the dominance of purple on everything from the menu to the logo. BurgerFuel has an eccentric look that can’t quite make up its mind. On the screen you see videos on repeat of motorbike enthusiasts, surfers and cyclists performing stunts next to promises of a 100% vegetarian patty, with internet videos of cats thrown in.

Internationally, BurgerFuel’s menu is, in a word, adventurous. The chain tops its cheese burgers with everything from peanut sauce, balsamic strawberries and jam, to corn chips and creamed corn. Its Egypt menu, however, is limited. The “BF monster” (EGP 49), which includes sliced beetroot, avocado and mango next to cheddar cheese, beef bacon and aioli, is the chain’s most creative venture. You can get a traditional burger with cheese, which BurgerFuel calls “Hamburgini with Cheese”, or try the “Hot Rod”, which brings some spice to the table with the addition of jalapeno peppers.

We first tried BurgerFuel’s spud fries, which came with a side of aioli and were cut into large thick pieces, along with their chicken fenders: 4 grilled chicken pieces, seasoned with garlic and rosemary sea salt. Both sides were excellent; the chicken was tender and juicy. The fries, while not particularly memorable, were still delicious, especially with the aioli sauce.

We then ordered a “Ford Freakout” (EGP 45), which included beef bacon, fresh avocado, salad, relish and aioli, and a third pounder with cheese (EGP38), which included Dijon mustard, bread and butter pickles, cheddar cheese, relish and aioli. While the bread was fresh and tasty, we thought the aioli sauce was too overpowering. The taste of the avocado was lost in the mix. Even the doofer, which was helpful, couldn’t completely stop the aioli from ending up on our clothes.

The famed New Zealand beef was surprisingly unremarkable. Although it was fresh, we felt that the beef was a little dry and, unlike the fenders, could have been a lot juicier.

BurgerFuel has fresh and delicious ingredients, but its food has a distinct flavour that uses aioli as a main ingredient. If you don’t like aioli, make sure to alert your burger maker because BurgerFuel generously puts it on everything. For those who like this distinct flavour, you are in for a treat.