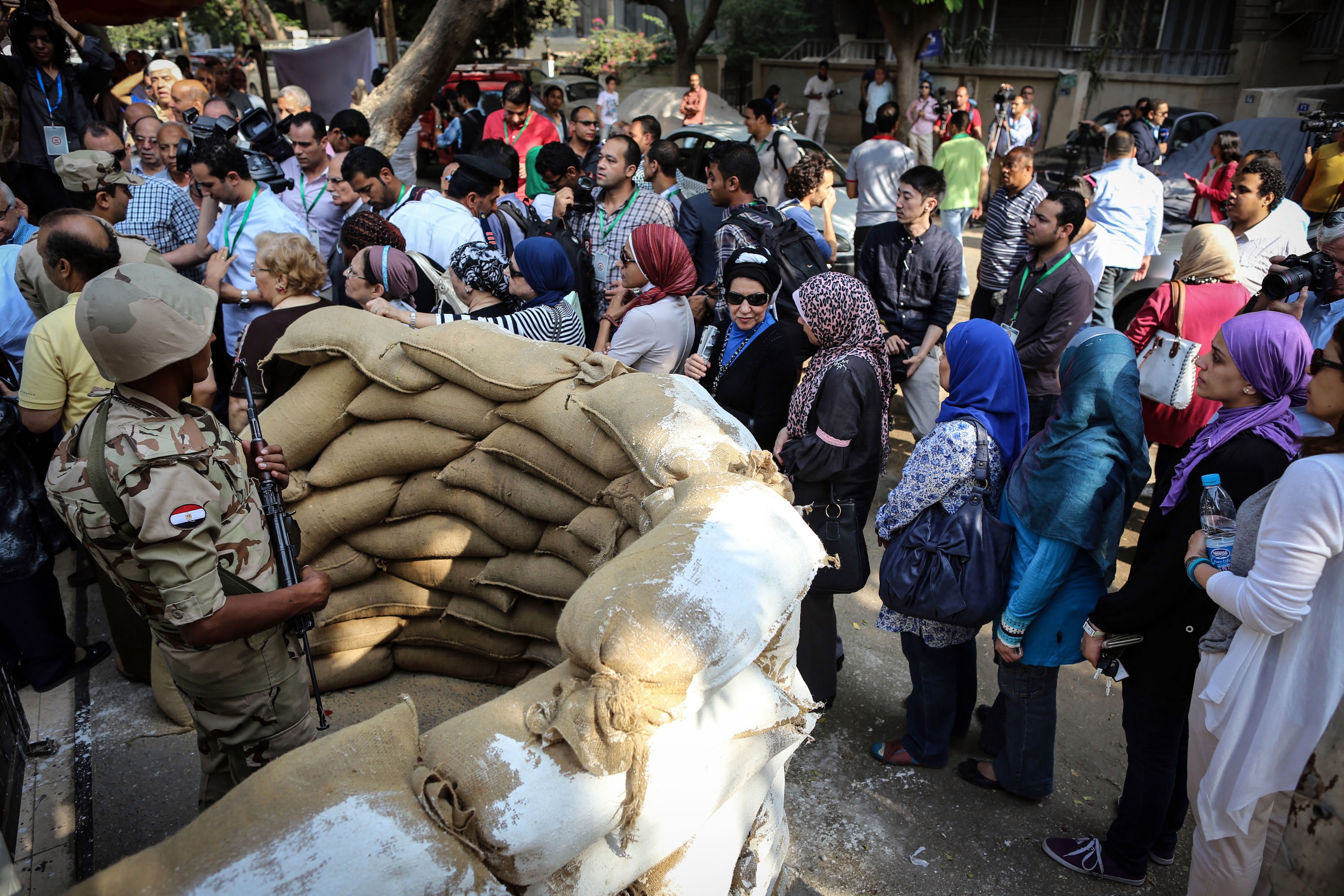 Polling stations across Egypt opened on Monday morning for the country’s presidential elections.

Voting is scheduled to begin on Monday and end Tuesday at 9pm, and will determine the next president in a poll between former Defence Minister Abdel Fattah Al-Sisi and Nasserist politician Hamdeen Sabahy, with the former widely expected to win.

Surrounded by large crowds, Al-Sisi eventually made his way inside his polling station in Heliopolis.  Sabahy, who was swarmed by journalists and photographers, stopped to take their questions outside his Giza polling station.

Mansour voted in a Heliopolis polling station, after which he called on every Egyptian to “participate in building the future of their country”.

Egyptians lined up outside polling stations nationwide to elect their next president.

Outside the Abu Al-Hol polling station in Giza, 44 year-old Mohamed El-Halfaya, who works as an administrator at an Al-Azhar institution, said he voted for Al-Sisi. El-Halfaya said he does not trust the “youth of the revolution”, whom he had limited between the ages of 16 to 25.

“The youth no longer listen to grownups; they are impulsive and reckless,” said El-Halfaya, who added that he had supported the 25 January Revolution and voiced his dissent to ousted President Hosni Mubarak and his regime.

At the polling station of the Hisham Shetta School in Giza, a crowd of Al-Sisi supporters stood outside the school with posters of the Field Marshal. The school was heavily secured by both military and police forces.

Saa’deya Falasteeny and her sister-in-law Madlen Maatoub voted together for Al-Sisi. Falasteeny, who voted in the 2012 elections for Mubarak’s Prime Minister Ahmed Shafiq, looks forward to “the construction of Egypt by Al-Sisi”.

While 64 year-old Fatheya Ismael chose Morsi during the 2012 elections, she said she voted for Al-Sisi because he is a “nice man”. She expressed that she was frustrated when Morsi “failed in delivering his promises.”

Khadra Mousa, who lives in an informal housing in Omraneya area, mentioned that she voted for the Field Marshal because she believes that becoming president is a demotion from his former position.

“I live in a room that has no roof and has bad sanitation, which is causing me health problems. All I want is decent housing and security for my son and his children,” she said.

Outside the Al-Orman polling station in Dokki, security personnel outnumbered the voters. Ateya Mekawy, a retired engineer, said he was voting for Al-Sisi, describing the Field Marshal as a “rational man who sacrificed his life for us”. Atteya had voted for Shafiq in the 2012 presidential elections.

Nabila Abdel Khabeer, who had voted for Sabahy during the 2012 elections, cast her ballot in Al-Sisi’s favour on Monday. Outside Al-Dokki School polling station, Abdel Khabeer said that Al-Sisi is “the man of this phase”, citing his “strength” and the endorsement he receives from Egyptians as well as Arab countries as reasons for choosing him over Sabahy.

“Hamdeen [Sabahy] is a patriot, but I don’t feel that he can be president after the threats Egypt has recently faced,” Abdel Khabeer said.

Several voters applauded Al-Sisi’s military background, citing it as the reason they opted for him. Abdel Khabeer said that at this phase, being a military man is in Al-Sisi’s favour. Myriam Iskandar, who went to the polling station with her 59 year-old mother Nahed Mofeed, said that a “big” country like Egypt needs a military man to rule it. Mofeed added that the country is in need of “discipline”; a characteristic which the military can offer.

“Al-Sisi has a vision for the country,” Iskandar said, “I believe that under his rule, security will increase.”

Galeela Sameh said she voted for Al-Sisi because she does not want to see “Egypt divided in the same way Libya or Sudan were divided”. Sameh, who had voted for ousted Islamist President Mohamed Morsi in both rounds in 2012, expressed dislike Sabahy because he is similar to Morsi.

“He talks a lot and does nothing,” Sameh said.

Sameh, who wears the niqab, said she supported the Muslim Brotherhood because she believed they would rule with integrity, but added that she did not feel safe during Morsi’s tenure.

“Security comes before food for Egyptians,” Sameh said. “We haven’t been secure since Mubarak’s toppling.”

Hekmat Ali also cited security as a reason for voting for Al-Sisi. Ali said she already felt safer during the transitional period, when Al-Sisi mostly served as deputy prime minister for security affairs, despite the recurring explosions.

During the 2012 presidential elections, Ali voted for Shafiq. She said she chose the former prime minister for his military background, adding that Al-Sisi is “an even better choice”.

Fatma Marzouk, Rehab Ahmed and Ayat Sherif went to the polling station in Al-Orman Military School together. The three young ladies said they all voted for Al-Sisi. Sherif described Al-Sisi as “a man in every sense of the word,” adding that he reminds her of the late Gamal Abdel Nasser.

Naglaa Al-Wali, a 71-year-old university professor at Banha University said she voted for Al-Sisi due to the success he had seen at “previous leading posts”, especially as armed forces’ commander in chief.

“I hope he recruits the people to work the same way he recruited army men,” she said.

A number of voters refused to disclose who they voted for. One of them is 35-year-old Hagar Helmy, who said she believed the country needs someone who can “reunite” the people.

Voting for Egyptians abroad started on 15 May and ran until 19 May with Al-Sisi winning in a landslide of approximately 94.5% of valid ballots cast.

On Sunday interim President Adly Mansour, whose tenure will end at the conclusion of the elections, said in an address that state institutions are without bias toward either presidential candidate and were only committed to proceeding with the country’s transitional roadmap.

Subsequent elections for the House of Representatives are expected to take place later this year.

The elections are considered the second step of the “roadmap” announced by Al-Sisi on 3 July 2013, following Morsi’s ouster. The first step was the drafting of and voting on the constitution, which passed with over 98 votes in favour in January.

These presidential elections represent the seventh time the polls have opened in Egypt since 2011.