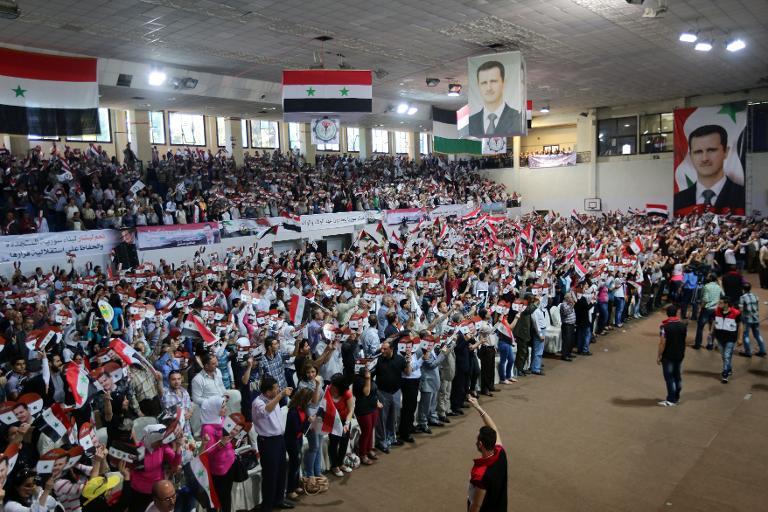 AFP- Iran said Sunday that Syrian opposition chief Ahmad Jarba was the “most inappropriate person” to lead the war-torn country and confirmed it would send observers to next month’s presidential election.

Jarba, president of the Syrian National Coalition, has sought to overthrow President Bashar Al-Assad for the past three years. Earlier this month Jarba visited Washington and shared a podium with US Secretary of State John Kerry.

Jarba is not running against Assad in a 3 June presidential vote but Iran’s Deputy Foreign Minister Hossein Amir Abdollahian hit out regardless.

“In our opinion, when it comes to politics, Ahmad Jarba is a weak person… he is the most inappropriate person for the future of Syria,” the official IRNA news agency quoted Amir Abdollahian as saying.

“He does not know who to meet in his foreign meetings,” he said, referring to talks between Jarba and Maryam Rajavi, head of the People’s Mujahedeen Organisation of Iran (PMOI), who lives in exile.

The leftwing PMOI, took up arms against Iran’s rulers after the 1979 Islamic revolution. Tehran holds the organisation responsible for murdering thousands of Iranian civilians and officials.

Shi’a Iran is a staunch supporter of Assad’s regime, which has been battling mostly Sunni rebels who have been trying to oust him.

Amir Abdollahian, meanwhile, said a parliamentary delegation would travel to Syria to monitor the vote count.

Last week, the speaker of the Syrian parliament, Mohammad Al-Lahham invited “friendly countries” to send observers, without identifying the nations by name.

The election has been dismissed as a “farce” by the Syrian opposition and a “parody of democracy” by the United States.

During Jarba’s recent US visit Kerry said the opposition chief “understands better than anybody, the stakes and the struggle and the fight against extremism,” in Syria.

Syrian opposition groups and Western countries have accused Tehran of supplying Damascus with military and financial backing since the uprising against Assad broke out in 2011.

Iran says it has only sent military experts to Syria and that it has provided Assad’s regime with humanitarian assistance.

US officials privately acknowledged that Jarba had asked President Barack Obama’s administration for anti-aircraft weapons to battle daily barrel bombings unleashed by Assad’s forces, arguing that it would help change the balance militarily on the ground.

The United States refused to be drawn on the response, pointing instead to new measures including an extra $27m in non-lethal aid for the rebels, as well as Treasury sanctions against Syrian officials.