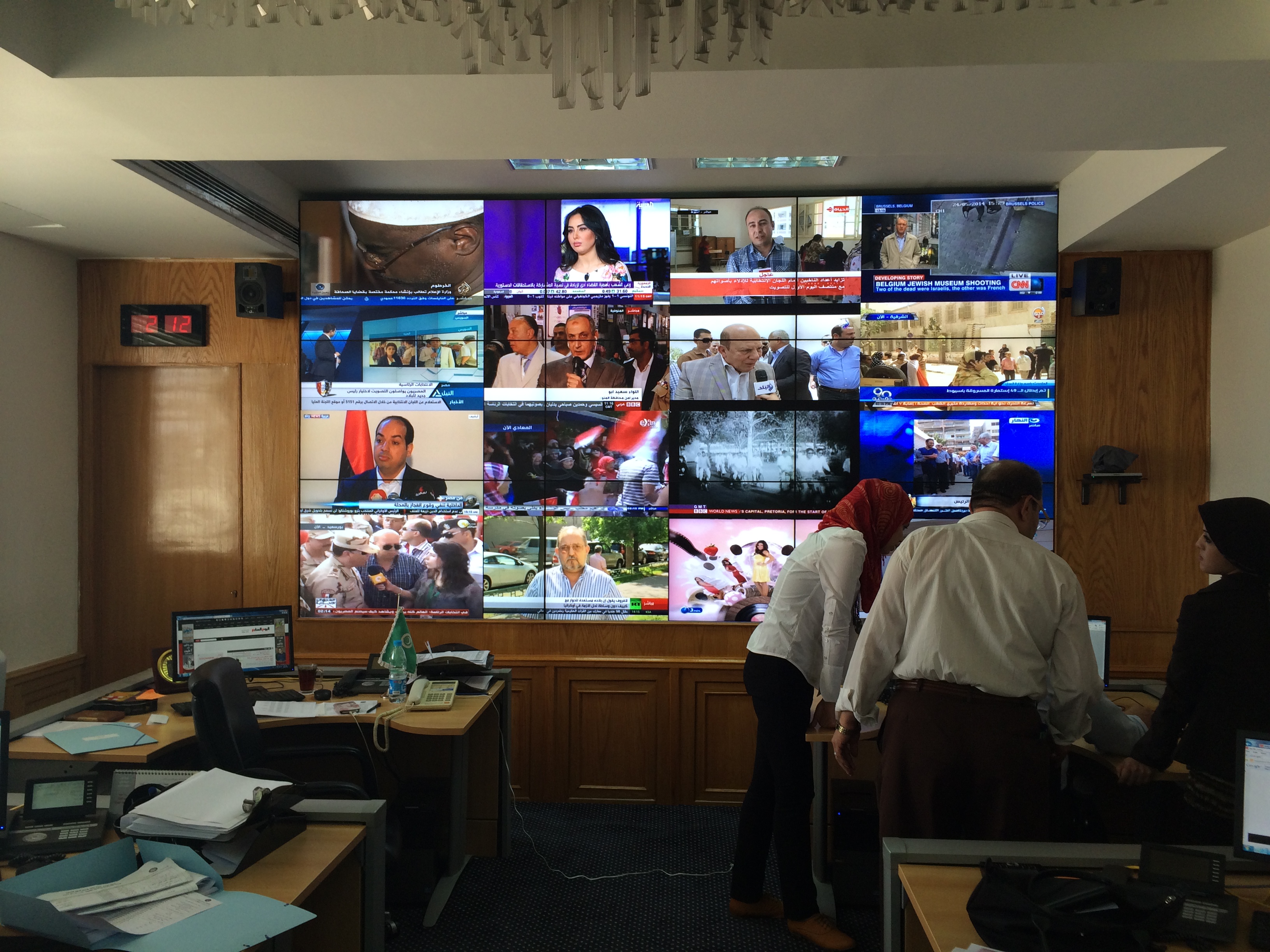 The Election Observation Missions began on Monday their task to monitor the first day of the presidential elections, in which Egyptians have two days to choose their next president. The choice is between former Defence Minister Abdel Fattah Al-Sisi and Nasserist Hamdeen Sabahy.

Daily News Egypt caught up with the heads of mission of two of the international observation missions, Mario David from the European Union and Assistant Secretary General of the Arab League and head of its mission, Haifa Abu Ghazaleh.

Speaking while observing the voting at a polling station in Abdeen, the heart of downtown Cairo, David noted “the relaxed atmosphere”, likening it to a party. Outside the polling station, women and children chanted Al-Sisi’s name while dancing to nationalistic songs playing in the background.

The Mohamed Farid School was the sixth polling station David and his team had visited on Monday morning. “We were at the opening of one of the polling stations,” said David. “We followed up with touring different areas of Cairo, different neighbourhoods; some upper class, some middle class and we are going to the most remote areas of Cairo.”

The European Union Election Observer Mission (EUEOM) has 150 observers representing the 28 EU member states as well as representatives from Norway and Canada and they were dispatched across the country late last week. David said: “We have 66 teams that will cover all the governorates with one exception; for security reasons, I did not want our people to be in North Sinai.” The governorate has seen a spike in militant activity, which targets mostly government and security forces’ interests.

Abu Ghazaleh had visited polling stations in the morning and returned to the Arab League headquarters to check in on its operations room, which receives updates from the 100 or so observers dispatched across 22 governorates in Egypt. The focal point of the room is a wall which has 16 screens displaying different news channels reporting on the election.

“We started this morning with the monitoring room first, to take care of all our observers across Egypt,” said Abu Ghazaleh. “We have started receiving reports from them because we call them three times a day,” adding: “We started calling them at 1 to give us information about the opening and other observations.” She noticed that later in the morning the numbers had dropped, but attributed this to people having to go to work.

On the process itself, she said: “Inside, they allowed people to enter two or three together for the [voting] process.” She added: “The process inside room was okay, it was according to the book.”

The Arab League assistant secretary general noted that at 9am, when the polling stations opened, there were “a lot of people. There were lines and it was very organised, queues for women and for men and even chairs for old people and special chairs for the handicapped people.”

David explained what the EUEOM is looking out for when its members enter a polling station. “First we salute the judge chairing that polling station, we ask if he has faced any difficulties so far and if citizens coming in are all registered and able to vote.”  He added that the observers will also inquire if representatives from both campaigns were present to witness the voting.

“We also ask if representatives from local NGOs have shown up,” he continued.  “There are quite a number of other organisations from other countries that have sent observation missions here and 17,000 observers accredited in Egypt from Egyptian civil society organisations, we have already met a few in various polling stations.”

David said the observers also look out for “the way in which people vote, if they can vote secret manner behind somewhere where they can be alone”. He added that the EUEOM will also be present during the ballot counting process and the team also has members at the Presidential Elections Committee headquarters where citizens’ complaints are received.

“What counts is not one individual perception; we have 150 observers so we can compare notes and experiences,” said David. The EUEOM is expected to present a preliminary report on 29 May, two days after polling closes. This will be followed by a final report “at a later stage”. The Arab League will also produce a preliminary report on the election to be followed by a full report.

David stressed that he and his team felt welcomed at the polling stations they visited, adding: “This is a country that is building its democratic process, so I think it’s very important that an atmosphere of tolerance may exist here.”

Another major violation was the identification cards that were issued by Misr Balady Front in Dakahleya governorate. The cards were similar to the observers’ cards which got the judges to allow them inside the polling stations where the card holders directed the candidates to vote for Al-Sisi.

Other violations included delay in the start time of the elections, supporters of both candidates promoting through flyers, songs, and other means, which breaks the electoral silence.