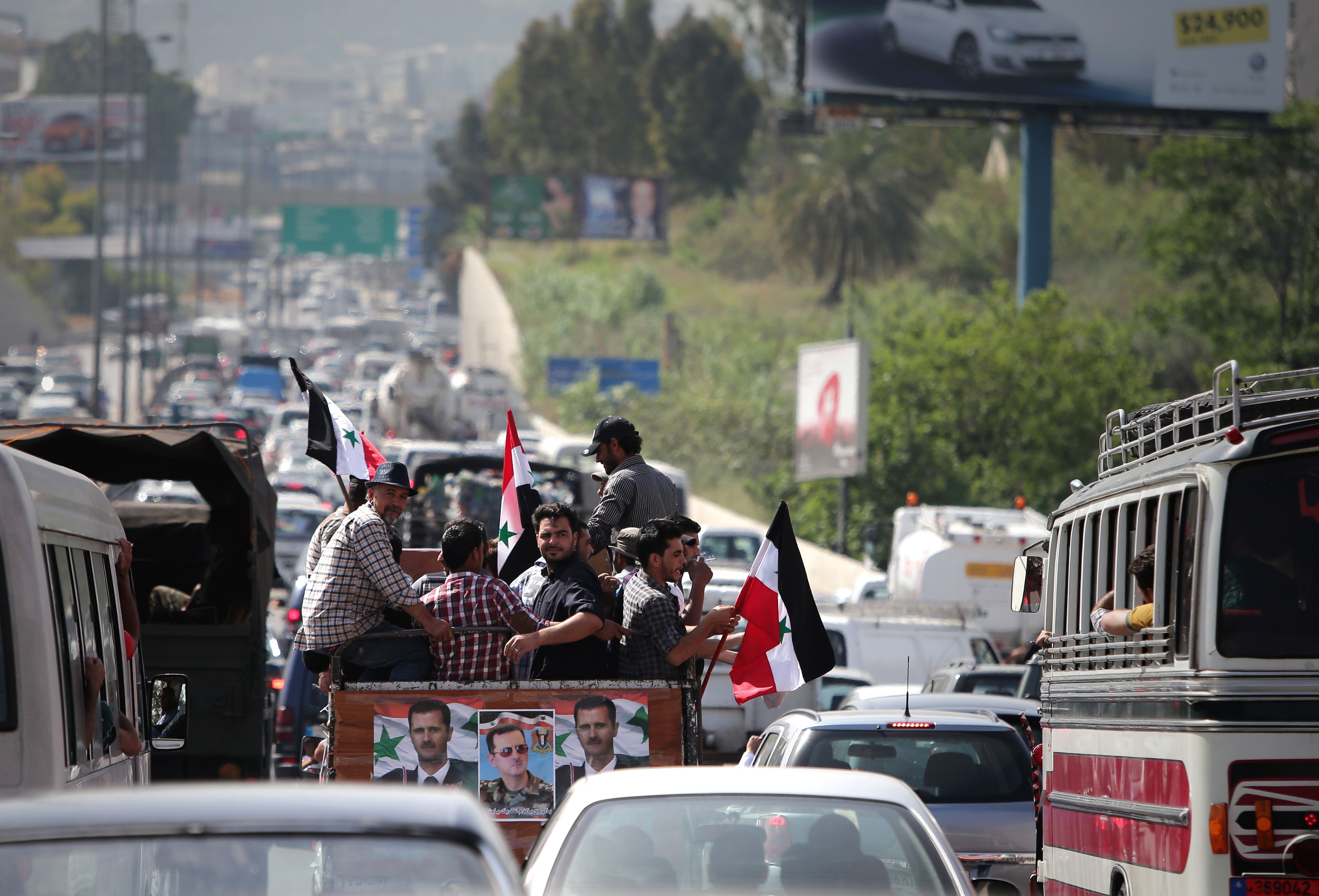 AFP – Thousands of Syrians, filling the streets around their embassy in Beirut, turned out to vote Wednesday in Syria’s controversial presidential poll being staged as civil war rages in the country.

For the early vote by expats, the Yarzeh district of east Beirut was festooned with Syrian flags and portraits of President Bashar Al-Assad, who is expected to cruise to victory in the 3 June election.

The yellow flags of Lebanon’s Shi’a militant movement Hezbollah, a staunch Assad ally in the three-year conflict with rebels, were also prominent.

Of the estimated three million Syrians living abroad, including both refugees and peacetime residents, only around 200,000 were entitled to vote on Wednesday, in 39 embassies abroad, a foreign ministry source said in Damascus.

“It’s a relatively acceptable figure, if we bear in mind the fact that France, Germany and Belgium have banned Syrian citizens” from voting, along with the United Arab Emirates, said Al-Watan, a pro-regime Damascus daily.

The ministry says 40,000 citizens are listed on the electoral register in Lebanon, which hosts more than a million refugees fleeing the violence.

But Damascus has barred refugees who left Syria through unofficial crossings from taking part in the election.

Voting began at 7.00am (0500 GMT) and by midday all the entrances to the Lebanese capital were blocked, causing long tailbacks, as thousands of Syrians descended on the embassy, mostly by foot, but also by car and bus.

The Lebanese army set up checkpoints around the embassy to head off any disturbances, with the country’s Syrian community sharply divided into pro- and anti-Assad camps.

There was little sign of opposition voters in the long queues outside the mission.

“The lion of the Arabs,” and “With our soul, with our blood, we sacrifice ourselves for you,” read slogans on Assad’s portraits.

“Where are the ‘Friends of Syria’? If only they would come and see this picture” of thousands of people taking part in the election, said one young man, sitting on a bus waving the Syrian flag.

Syria’s exiled opposition and its Western backers, who hold international meetings under a “Friends of Syria” umbrella, have ridiculed the 3 June vote as a “farce”.

The civil war raging since March 2011 has killed more than 160,000 people and forced nearly half the population to flee their homes.

Syrian state television repeatedly interrupted its programmes to broadcast live images of crowds of the loyalists voting in Beirut.

“These elections are a response to those who had wagered on the fall of Syria. It proves that the Syrian people are attached to their land, their country and their sovereignty,” said Syria’s ambassador to Lebanon, Ali Abdelkarim Ali.

Inside Syria, the conflict has left large swathes of territory under rebel control, allowing for voting only in regime-controlled areas.

Amid similar scenes in Amman and under tight security, Syrians voters on Wednesday lined up in their hundreds outside their embassy.

Around 30 anti-regime activists stood near the mission, chanting slogans and carrying a banner which read: “No to the killer’s re-election”.

“I came today to elect president Assad who deserves my vote. He proved to the world that Syria is strong under his leadership,” said voter Mohammad Ahmad, 32, from the rebel-held northern city of Raqa.

“We came to express our love and support for Syria, which will become stronger after the election despite terrorism,” said Dalia, 22, from Damascus, wearing military uniform and sunglasses.

The vote came two days after Jordan expelled the Syrian ambassador to Amman, prompting Damascus to announce it was kicking out Amman’s charge d’affaires.