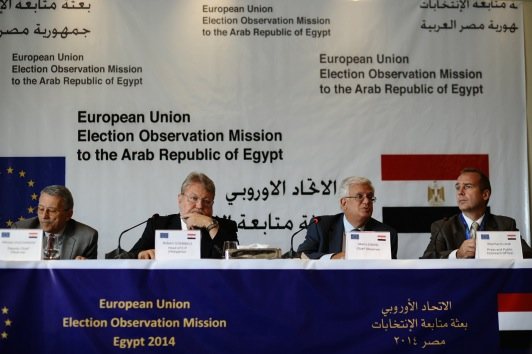 The European Union Election Observation Mission said on Thursday that Egypt’s presidential election was conducted within the law but “in an environment falling short of constitutional principles”, according to Chief Observer Mario David.

United States based organisation Democracy International (DI) was very critical of the environment surrounding the election. “Egypt’s repressive political environment made a genuinely democratic presidential election impossible,” said DI President Eric Bjornlund. “Democratic progress cannot be achieved at the expense of human rights,” he added, calling for the government to take measures to “open political space and put an end to the political exclusion and intimidation that have characterised this process.”

David pointed out that despite the “wide-ranging” rights outlined in Egypt’s constitution, passed by referendum in January, “the respect for these rights falls short of these constitutional principles.” He added: “Freedoms of association, assembly and expression are areas of concern.”

The EU observer chief added that the legal framework for the election, while offering “an adequate basis for the conduct… it fell short of full compliance with applicable international standards for democratic elections in some respects.” He highlighted that the “right to vote and the right to stand for all citizens are not fully protected.” David also pointed out that the Presidential Election Law prevents appeals against the decisions of the Presidential Election Commission. He called for the Parliamentary Election Law to “address those concerns.”

David outlined a number of issues that impacted negatively on the climate surrounding the election and its lead-up. He highlighted that private media channels gave almost two times as much coverage to Abdel Fattah Al-Sisi compared to that of his rival Hamdeen Sabahy. This issue was also highlighted by DI that said the media’s “approach and discourse applied to each candidate differed significantly”.

David also pointed to “self-censorship of journalists”, which he attributed to “fear of a perceived declining freedom of the media amongst journalists”. He said that “imprisonment of Al Jazeera journalists and the detention of others without charge” contributed to this.

DI, too, strongly criticised the climate, saying: “Since the events of summer 2013, Egypt has pursued a transitional roadmap without regard for basic political rights.” The organisation called on Egypt’s leaders to “to embrace political inclusion and to reorient the country toward broad respect for human rights and effective, democratic institutions that are viewed across the society as legitimate.”

Both the EUEOM and DI criticised the lack of space for dissenting voices in Egyptian society, pointing to the banning of the 6 April Youth Movement and the arrest of political activists.

David also expressed concerns over the campaign leading up to the election. “Candidate Al-Sisi’s tightly controlled public profile and the limited resources of candidate Sabahy’s campaign have impacted on the ability of both campaigns to reach out to voters.” He also pointed to “insufficient regulation of campaign finance.” The mission chief said third parties “were contributing outside of the spending limits”, highlighting that the “dominant visibility of the poster campaign of candidate Al-Sisi illustrated that this lack of regulation operated in his favour.”

The decision by the PEC to extend voting for a day was criticised by DI on Wednesday, which said that it “harms the credibility” of Egypt’s political process. David said that the EUEOM believed the decision cause “unnecessary uncertainty” and that he did not believe that it would affect the outcome. He said that while the EUEOM was aware of “rumours” of “political interference and political pressure” on the PEC, he did not believe the judges that make up the PEC would bow to such pressure.

David said the PEC had informed the EUEOM that the participation rate at the time of writing the preliminary report was 47.3%.

The negative points outlined some irregularities including in some instances the non-usage of phosphorous ink used to identify people who had voted despite its being available for use. She also pointed out that some Arab League observers were denied access to polling stations by security forces despite having the correct accreditation to do so. “This was maybe due to the insufficient awareness of the role of observers and their rights,” she said.

The African Union observer mission released a statement on Thursday in which it outlined the parameters of its mission and announced that it would present its preliminary findings on 3 June.