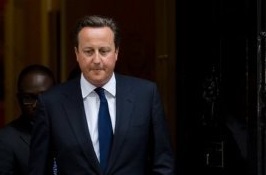 AFP – British Prime Minister David Cameron said Saturday he was “appalled” by the “barbaric” death sentence given to a Sudanese woman for apostasy.

Meriam Yahia Ibrahim Ishag, 27, was condemned on 15 May under Islamic Sharia law, which outlaws conversions on pain of death.

“I am absolutely appalled by the decision to sentence Meriam Yahia Ibrahim Ishag to death,” Cameron said in a statement.

“The way she is being treated is barbaric and has no place in today’s world. Religious freedom is an absolute, fundamental human right,” the Conservative leader said.

“I urge the government of Sudan to overturn the sentence and immediately provide appropriate support and medical care for her and her children.

“The UK will continue to press the government of Sudan to act.”

The Christian Sudanese woman, who was sentenced to hang, was incarcerated with her 20-month-old toddler according to rights activists, and gave birth this week to another baby in jail.

She should be allowed to nurse her baby for two years before any death sentence is carried out, legal experts have said.

Former British prime minister Tony Blair, who heads a faith foundation, said justifying Ishag’s treatment in the name of religion was “a brutal and sickening distortion of faith and we must unite in calling for her release”.

“We must fight to protect freedom of belief, strive to allow people to worship the god they want or to worship none,” he said, according to The Times newspaper.

Meanwhile former defence secretary Liam Fox said Britain should reconsider whether it was acceptable to give aid money to countries which allow such treatment.