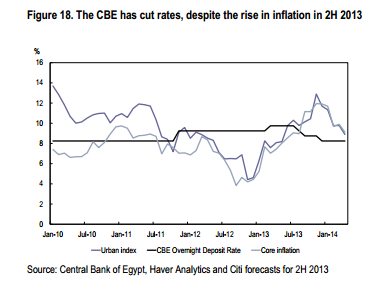 Egypt’s fiscal deficit is set to “remain firmly in double digits” with inflation easing in 2014, a Citibank report published in May has said.

The report pointed out that “even if a slow pick-up in growth is possible in 2014, we still think that a new government will have to think more comprehensively about economic policy at some point”.

Due to the modest depreciation of the Egyptian Pound in 2014 and weak economic growth, inflation is not expected to rise sharply.

“While it could be argued that the CBE’s [Central Bank of Egypt] cuts in the overnight deposit rate (ODR) in 2013 were premature given the rise in inflation in late 2013 back into double digits, we think that once the hump is passed, inflationary pressures will start to ease,” the report read.

The easing of inflation will allow further tentative cuts in the ODR to support the growth process, lessening the local cost of fusing the deficit.

Discussing a long-term solution for the fiscal deficit problem, the report mentioned that real reforms are needed, which should include reduction in food and energy subsidies.

The report said that support from the GCC has allowed the government to put off “difficult choices” and operate in with a “muddle through” fiscal strategy until the first half of 2015.

“While this could potentially be based around a deal with the IMF, we think it is more likely to be a home-grown economic reform programme with IMF buy in and more logical external financing, of which a large part would be Gulf funding,” the report said.

The Ministry of Finance announced last Monday that the state budget has been referred for presidential approval. Subsidies on basic food commodities in the new budget increased to EGP 34.05bn, marking a 10% increase on the previous year.