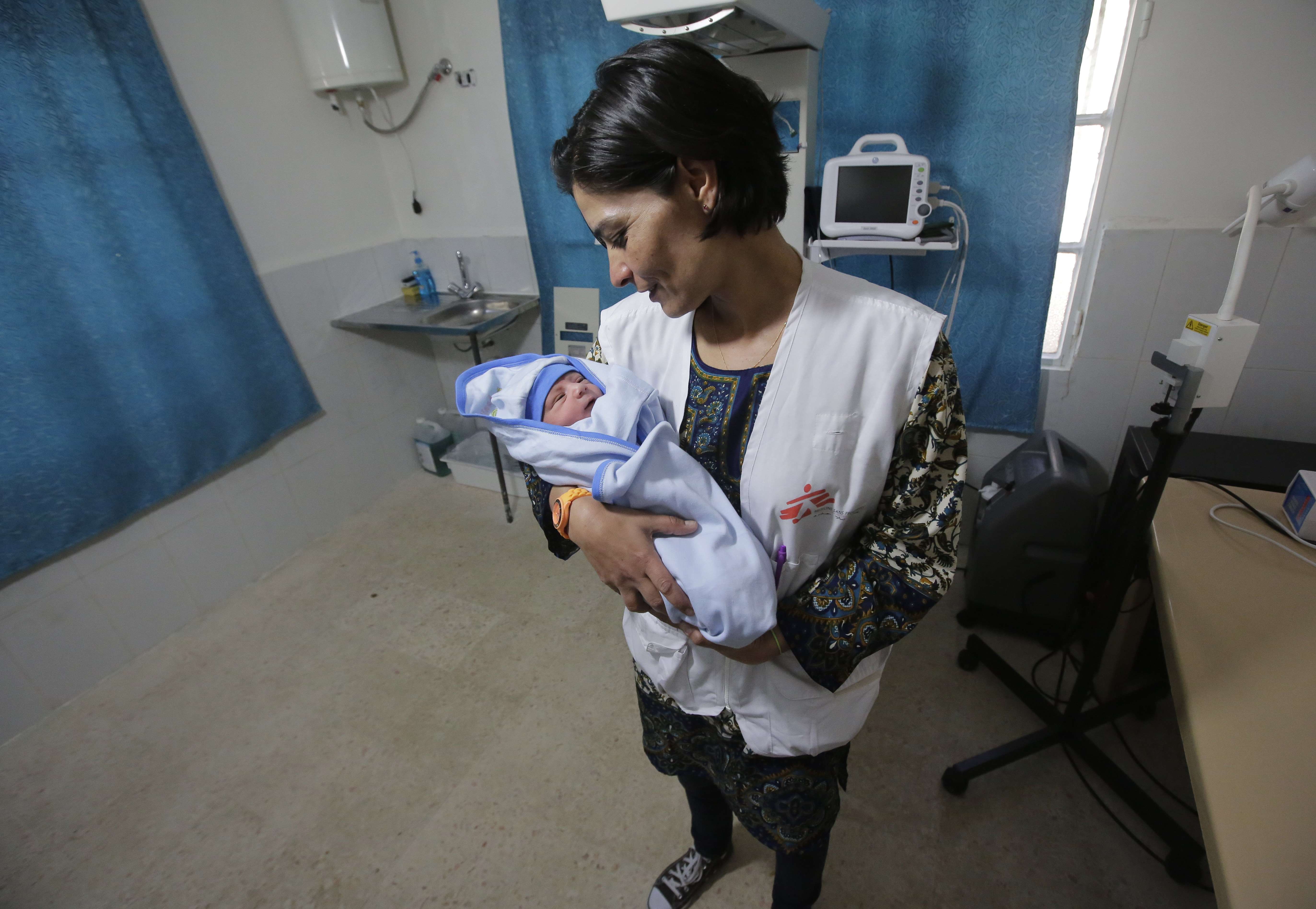 AFP – Young mothers who fled Syria’s war for dismal refugee camps in Lebanon struggle to imagine a future for their babies, even though they find their newborns a rare source of joy.

“My baby was born a refugee, and he faces a really tough future here,” said Umm Khaled, nursing a newborn baby in a clinic run by Doctors Without Borders (MSF) at the border town of Arsal.

“I was happy I had a baby, but these are really hard conditions to raise a child,” she said, looked on by another of her children, a thumb-sucking two-year-old boy.

Umm Khaled, who fled the Qalamun area of western Syria as the army evicted rebels from town after town in a winter offensive, considers herself lucky: her husband has a job in Arsal.

But they struggle to make ends meet and to cover their children’s needs.

“I love my children, but sometimes I look at them and I cry. When I lived in Syria, I had a house and a garden where they could play. Here, I have nothing for them,” said Umm Khaled, sadly, looking older than her 25 years.

Lebanon is home to more than a million refugees from Syria’s devastating war. Half of them are children, the United Nations says, warning they risk becoming a “lost generation”.

The population of Arsal alone has exploded from some 40,000 residents to more than 100,000 over the course of Syria’s war which erupted in 2011.

Most of the refugees in Arsal live in tents scattered across makeshift camps. Their children, for the most part, do not go to school, spending countless hours playing in unhealthy conditions.

Mothers do their best to provide a safe space for their babies inside the tents, wrapping them in pink and white blankets, shielding them from the elements.

Some, like Umm Mohammed, fled while they were heavily pregnant.

“I was seven months pregnant when we fled Nabuk. A warplane was bombing the road while we were on our way, but we made it,” said the mother of four, whose husband is jobless.

“My baby Uday gives me hope, even if we’ve lost everything. But none of his siblings go to school. I have no idea how I will provide for any of them.”

Studies have shown refugee women tend to have more babies than their fellow countrywomen, according to Maria Luz Ruiz, a nurse and midwife who runs the MSF mother and child care centre in the Lebanese border town of Arsal.

“It’s very complicated to understand sometimes for us, but yes, it’s part of it,” Ruiz told AFP.

The centre opened in March, allowing women to deliver for free and providing ante and post-natal care.

Ruiz said “maternity is very important for Syrian women”, helping them to cope with the distress of their flight from home, family and friends.

The mothers’ troubles are compounded by the endemically poor health and economic conditions of life as a refugee.

Ruiz said most of the children brought in to the MSF facility have “respiratory problems, infections and some gastrointestinal disorders”.

A young couple who fled former rebel bastion Yabrud, Amal and husband Amer admitted to mixed emotions at having a new baby on the way.

“When I first became pregnant, Yabrud was just fine. There was no way we could have predicted we would become refugees,” said brown-eyed Amal, 22.

At the MSF clinic for her last pre-natal test, the couple’s eyes filled with wonder as they heard their baby’s heartbeat through the ultrasound.

“I felt so happy. A baby is coming, thank God, and I will become a father. But I am also sad for him, because we have no home,” said Amer.

The couple fled Yabrud after he was wounded in fighting that ended in March with the town’s capture by the army.

Wearing a silver-coloured scarf and battered sandals, Amal remained defiant over the future. “I really hope that by the time my baby grows, Syria is more beautiful,” she said.