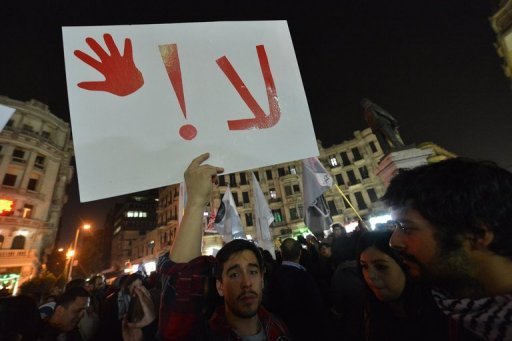 Security forces have arrested 23 students and referred them to prosecution for sexually harassing girls in the Upper Egypt governorate of Sohag, state-run Al-Ahram reported.

One of the most high profile incidents of sexual harassment this year also occurred at an educational institution. In March, a female student at Cairo University was attacked by “dozens” of fellow students, where she was physically and verbally assaulted. The victim had to be escorted off campus by security officials.

In May, Interim Prime Minister Ibrahim Mehleb’s cabinet passed a draft law amending articles in the Penal Code establishing harsher punishment for sexual harassment. However, women’s rights advocates said this was not enough.

The I Saw Harassment (Shoft Taharosh) initiative is pushing for legislation that would criminalise sexual harassment and violence against women. The initiative drafted a letter Monday to Egypt’s incoming president, calling on him to make this legislation a priority.

According to a UN report issued last year an overwhelming majority of Egyptian women (99.3%) have experienced some sort of sexual harassment, and 96.5% of women had been sexually assaulted in some way.

‘I Saw Harassment’ is one of many anti-sexual violence groups that have sprung up in recent years to confront widespread sexual harassment. These groups seek to challenge general indifference on the part of police and the general public towards the plight of survivors of sexual abuse.

The National Council for Women (NCW) last year drafted a law addressing violence against women, and submitted it to ousted President Mohamed Morsi’s administration. It was resubmitted to interim President Adly Mansour, but it is yet to be issued.