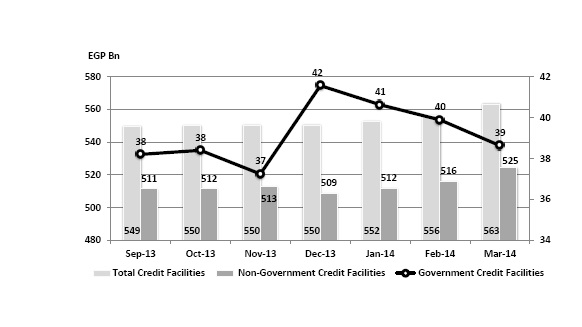 The Central Bank of Egypt (CBE) announced in its monthly report that total credit facilities granted from banks to customers increased by EGP 14bn (2.6%) from July to March of the 2013-2014 fiscal year.

The report, published on Sunday, stated that the private business sector accounted for 63.2% of total non-government allocated credit facilities at the end of March.

The government’s balance of credit facilities decreased at the end of March to EGP 38.6bn as compared to EGP 41.6bn in December, caused by the drop in balance of local currency.

The balance of non-governmental credit facilities rose to EGP 524.5bn at the end of March compared with EGP 508.7bn in December.

*Values in millions of EGP