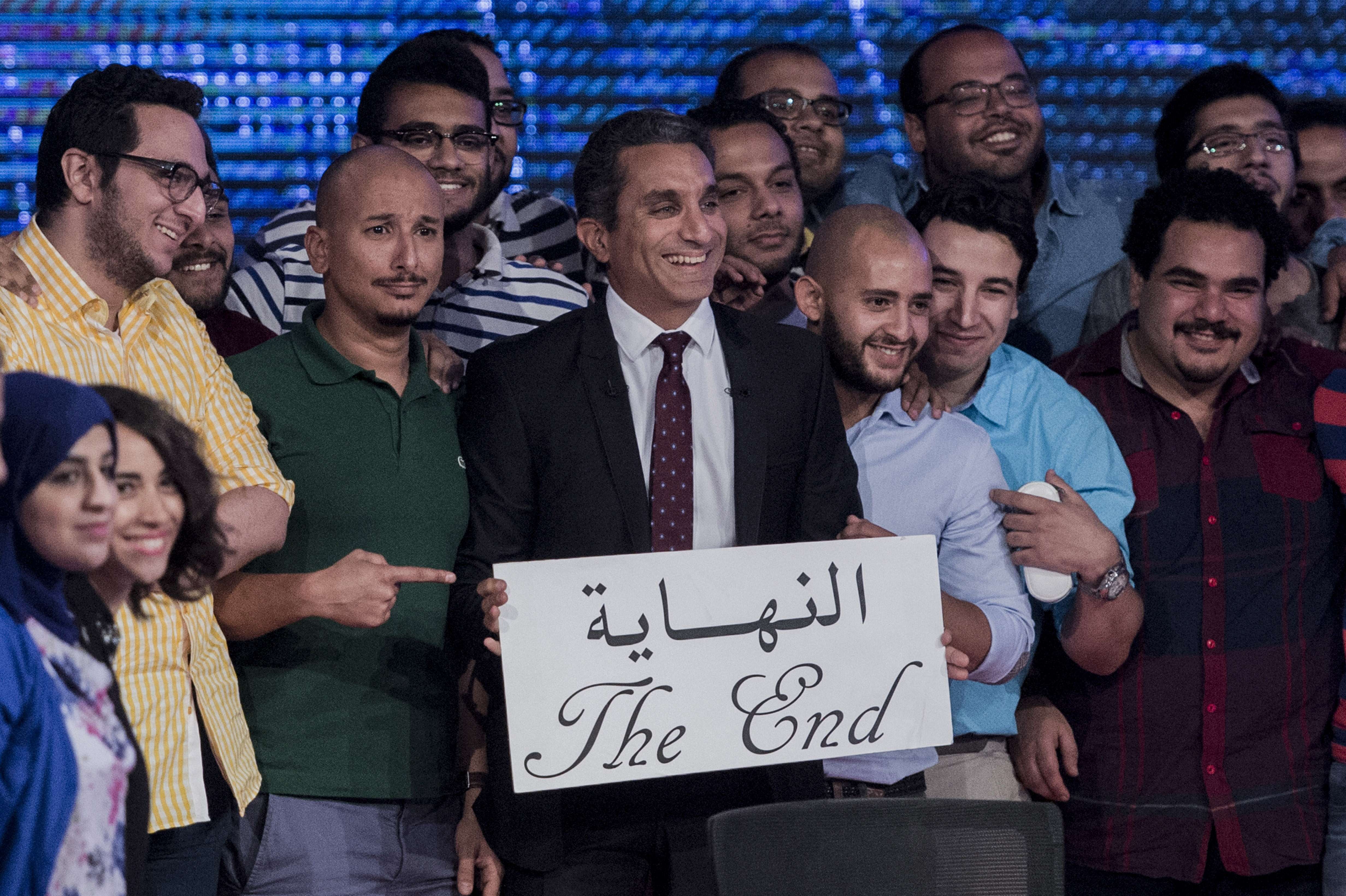 Condemnation followed the announcement of the decision to shut down Egypt’s satirical show Al-Bernameg on Monday, while the show’s presenter Bassem Youssef described the shutdown as “a stronger message” than maintaining it.

One day before the announcement of the presidential election results, Youssef announced in a press conference held at the show’s studio in downtown Cairo that Al-Bernameg will be taken off the air, adding that “the current atmosphere isn’t fitting for a comedy show or any other show”.

The New York-based Committee to Protect Journalists (CPJ) cited concern regarding Al-Bernameg’s shut-down in a statement released on Monday.

Youssef’s show was previously suspended by privately-owned Saudi satellite channel MBC Masr ahead of presidential elections in order to not “influence voters”. The programme was expected to return this past Friday, but did not air.

Youssef said that the decision to stop airing the show was taken without seeing the script of the unaired episode. This means that the problem was not in the content of the episode, but in the show itself, he added.

“The programme, in its current form, will not be allowed to resume airing neither on MBC nor on any other Egyptian or Arabic channel,” Youssef said.

The satirical presenter thanked MBC for “struggling for the show [to continue airing]”, applauding their honesty with him regarding the possibility of airing of it.

Interim Prime Minister Ibrahim Mehleb ordered the cabinet to review the memorandum of understanding (MoU) between the Egyptian Radio and Television Union (ERTU) and MBC on 13 May. Mehleb said that the memorandum was not “legally binding”.

“We are tired of moving from one channel to another and being under nervous, psychological and financial pressure,” Youssef said. He added that he fears for his own personal safety as well as that of his family and acquaintances.

Youssef, who faced the prosecution last year for a complaint accusing him of insulting ousted President Mohamed Morsi, highlighted the ongoing harassment he has faced to air his show for the past two years.

Youssef moved to MBC Masr in February after his contract with Egyptian private-owned satellite network CBC was abruptly terminated.

The Saudi network suffered from signal jamming more than once during the airing of “Al-Bernameg”. MBC Masr described the jamming as “deliberate”, claiming that it came from outside sources.

The show was suspended by CBC on 2 November, a few minutes before the second episode of the third season was scheduled to air.

“I am proud of the efforts exerted to shut down the show,” Youssef said. “Shutting it down now is a victory for the show.”

Youssef stressed that shutting down Al-Bernameg is a “stronger message” than maintaining it while watering down its content. “We would rather shut down the show than humiliate it,” he added.

The CPJ, which had honoured Youssef with its International Press Freedom Award in 2013, noted that the shutdown of Al-Bernameg comes at a time when dozens of journalists are in Egyptian jails. CPJ figures suggest at least 17 journalists are currently behind bars; most of them are accused of crimes related to publishing.

The CPJ’s Middle East and North Africa programme coordinator, Sherif Mansour, noted that “a series of governments have tried and failed to silence” Youssef. “The fact that he now chooses to censor himself is a resounding vote of no confidence in the likelihood that the next administration will support and foster freedom of expression,” he added.

Preliminary results of the presidential elections suggested that Al-Sisi won in a landslide victory, reaping over 90% of the votes. The official results were scheduled to be announced on Tuesday evening.