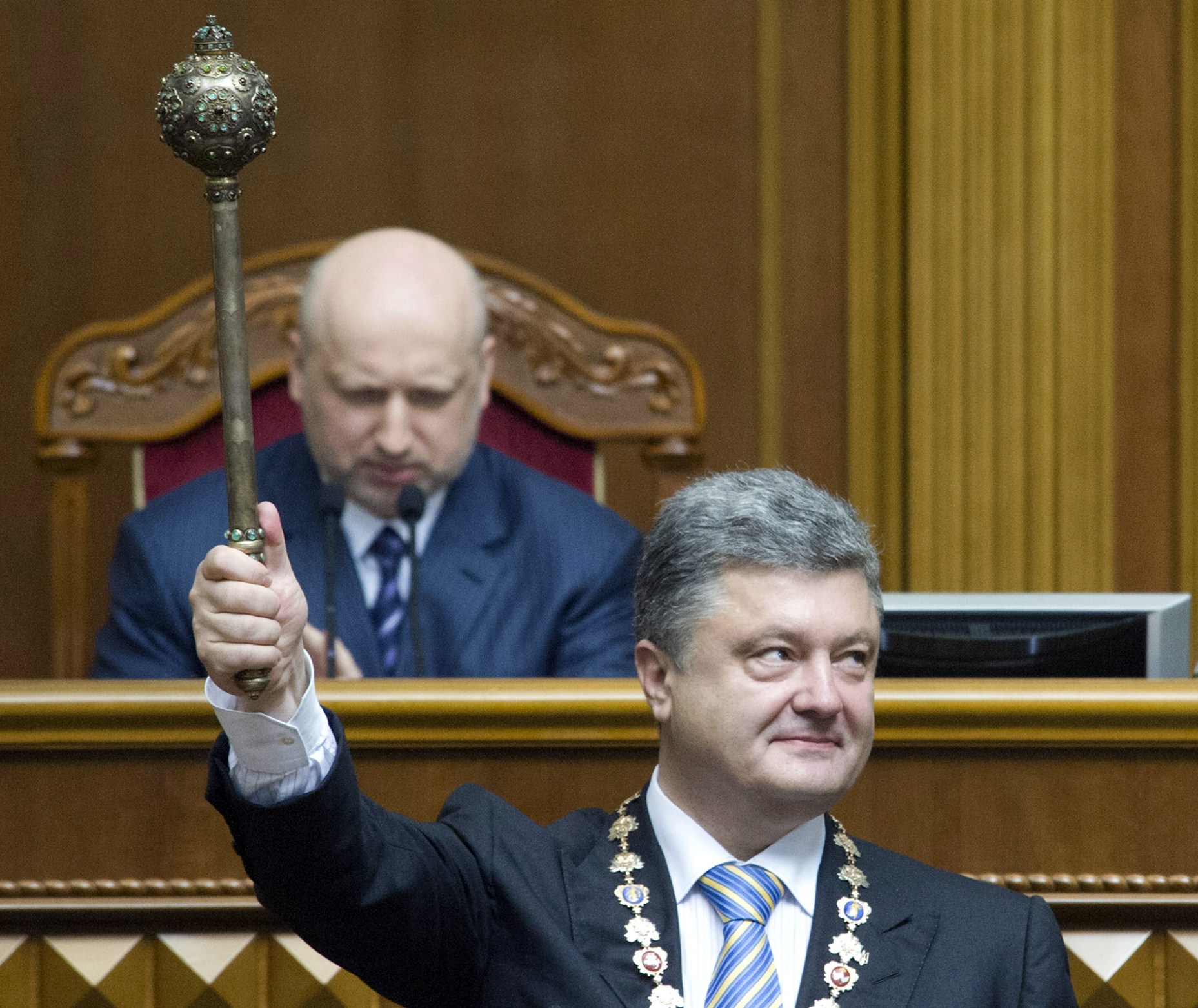 AFP – Ukraine’s Western-backed billionaire Petro Poroshenko was sworn in as president on Saturday, as glimmers of hope emerged for a solution to the bloody crisis that has pitted his splintered ex-Soviet country against Russia.

Poroshenko took the oath of office in Kiev’s parliament one day after holding his first meeting with Russian President Vladimir Putin, since a dominant May 25 election victory handed him the mandate to try and save Ukraine from disintegration and economic collapse.

The 48-year-old magnate – affectionately dubbed the “chocolate king” for his popular brand of sweets – first asked a packed session of parliament to pay a minute’s silence for the 100 people killed in three days of carnage in Kiev that led to the ouster of Ukraine’s Kremlin-backed regime.

He then vowed to give an amnesty to any insurgents who had “no blood on their hands” as the first step in a peace initiative designed to save the nation of 46 million, which has already lost its Crimea peninsula to Russian annexation, from splintering along ethnic lines.

“I am assuming the presidency in order to preserve and strengthen Ukraine’s unity,” Poroshenko said in an address that alternated between Ukrainian and Russia.

But he also added that he would never accept Russia’s seizure of Crimea or attempts to divert his pro-European course.

“Crimea will remain a part of Ukraine,” Poroshenko said firmly, ‘This is the moment of truth. It is up to us to decide our future.”

Saturday’s solemn ceremony was attended by US Vice President Joe Biden and European Council president Herman Van Rompuy, along with more than 20 other dignitaries from countries that back Kiev’s new Westward drive.

But Moscow was only represented by its acting ambassador to Kiev – a telling sign of how far relations between the two neighbours have slipped since the February uprising.

Poroshenko is one of Ukraine’s more experienced politicians who held senior cabinet posts under both the Western-leaning government that followed Ukraine’s 2004 Orange Revolution and the Moscow-friendly leadership of ousted president Viktor Yanukovych.

That pragmatic approach has instilled hope among many Ukrainians that he will be able to resolve an eight-week secessionist drive by pro-Russian militants in the eastern rust belt that has claimed 200 lives and grown even more violent since his election.

The new president must also address a two-year recession and tackle endemic corruption that has turned Ukraine into one of Europe’s poorest countries and fed large-scale public resentment.

A step in that direction may have been taken Friday when he shook hands with Putin on the sidelines of D-Day commemorations in Normandy that were haunted by the spectre of an outright civil war breaking out on the European Union’s eastern edge.

The 15-minute meeting was arranged by German Chancellor Angela Merkel, a Russian speaker long viewed as the one European leader who can exercise substantial influence over Moscow because of their strong trade ties.

Moscow had previously said it was ready to work with the new president but stopped short of explicitly recognising him as the legitimate leader of the Ukrainian people.

US President Barack Obama – who met Putin for 10 minutes on Friday despite earlier efforts to isolate the hardline Kremlin chief – told NBC Nightly News that Russia has to recognise Poroshenko as legitimate if it wanted to resolve the flaring conflict.

“Mr Putin should be working directly with Mr Poroshenko and the government of Ukraine to try to resolve differences between the two countries,” Obama stressed.

Russia also needs “to stop financing and arming separatists who have been wreaking havoc in the eastern part of the country,” Obama added.

Tensions in south-eastern Ukraine have mounted in recent days with the government admitting that it had lost control of three border posts that were being routinely attacked by the rebels.

Insurgents on Friday shot down a Ukrainian military cargo plane near Slavyansk – a rebel stronghold where many of the 120,000 residents have been forced to spend nights in basements because of the ceaseless fighting.

A military spokesman said Saturday that “some crew members” managed to evacuate in time, but gave no casualty figure.

Putin sounded a surprisingly upbeat note after his meeting with Poroshenko, saying the new president promised to unveil a peace plan as early as Sunday that would introduce a ceasefire and open the way for negotiations between the militants and Kiev.

“I cannot but welcome the position of Poroshenko on the necessity to end the bloodletting immediately in the east of Ukraine,” he said.

“I cannot say for sure how that can be implemented in practical terms, but overall it seemed to be to be the right approach,” he said.

“He has a plan, which – it’s probably better to ask him. He explained it quickly to me,” he added.

But Putin also warned that Russia would have no choice but to slap trade restrictions on Ukraine should it proceed with plans to sign an historic economic treaty with the European Union in the coming weeks.

“Ukraine must demonstrate its good will. The repressive operation must be stopped,” said Putin.

“I hope that will happen, and if that happens, the conditions would be there for the development of our relations in other areas, including economic.”