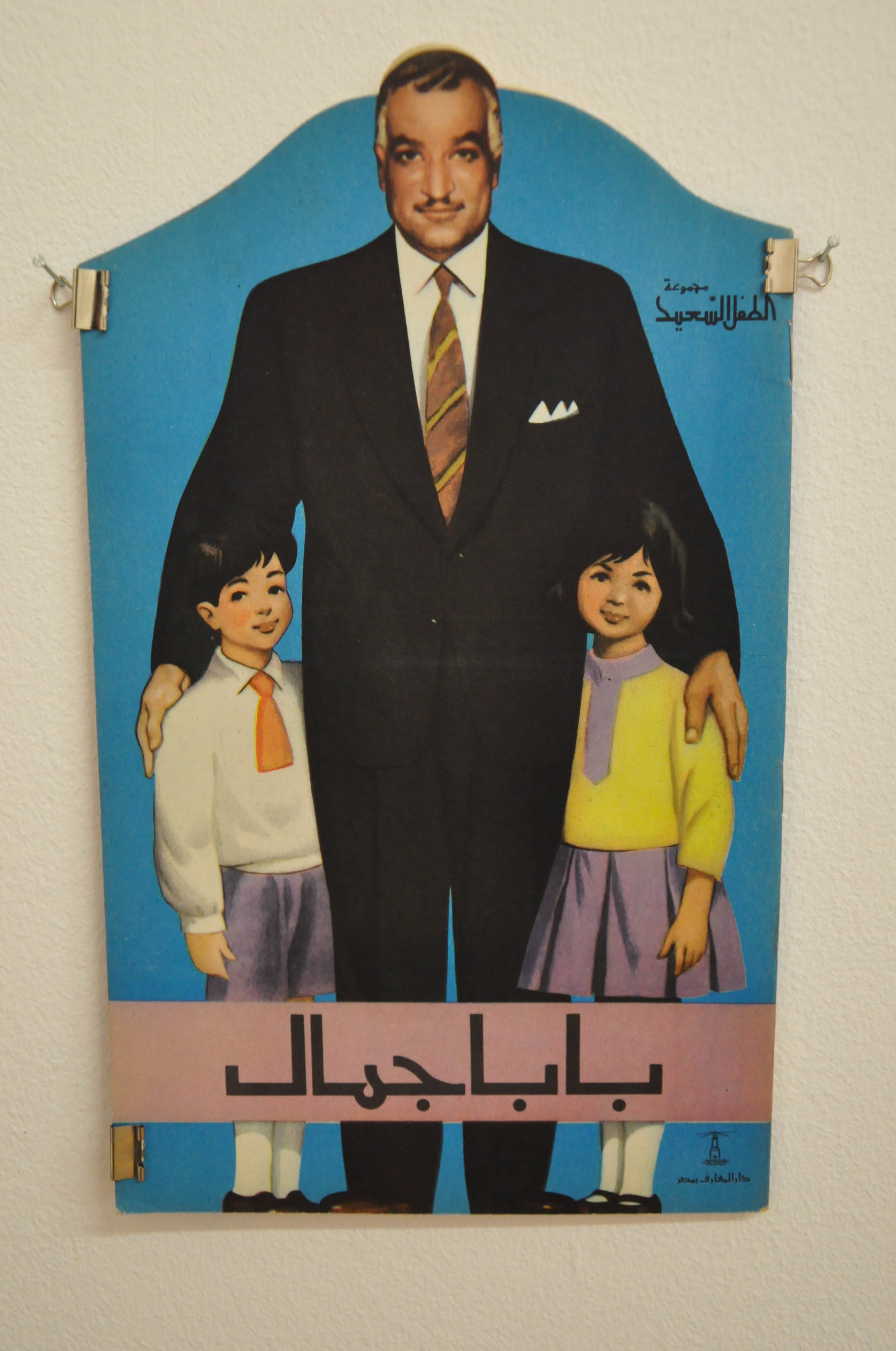 The first thing you see when you walk in the Gypsum Gallery is a mounted magazine cover of former Egyptian president Gamal Abdel Nasser, head held up high, surrounded by drawings of the sphinx, minarets, churches, and other symbols of the country he led. The cover stands side by side with a drawing of the eagle from the Egyptian flag, mirroring Nasser’s posture.

The piece is part of Palestinian-Kuwaiti artist Ala Younis’ first exhibition in Egypt, titled ‘UAR’. Borrowing its title from the name of a sovereign union agreement between Egypt and Syria in the late fifties, the research-based project explores perceptions of Nasser, former president of Egypt and the United Arab Republic, as the hero and the anti-hero, and examines the dichotomy between his promises and failures. Using images and objects from a variety of mediums, Younis traces the lines that drew Nasser’s picture nationally and internationally.

The exhibit attempts to “explore myth making around a personality”, said Hittalamani Raju Hittalamani, a researcher in media and cultural studies, which makes the timing of the exhibition, which opened a couple of weeks before the Egyptian presidential elections, thought provoking.

Just as Nasser promised modernisation, so, too, has newly elected President Abdel Fattah Al-Sisi, he said. The idea of industrial progress is an integral component in the making of the culture of a “mythological hero, a saviour, a single man who would shoulder the burden of a nation nothing less or more.”

The exhibit illustrates how this idea of larger-than-life personality cults is a “culture that appears so deeply rooted in the region,” Hittalamani said. It’s now appearing in an “updated form”, he said.

With Nasser, the region dreamed of a rocket-industry project bringing bounty to the Arab world. His death drew the curtains on the project. Five million people marched to mourn the dream with the dead president, and heads of all Arab states attended the burial of the leader between shock and grief.

“UAR” is Younis’ third project that addresses Arab Nationalism by recollecting historical and political failures. The first was a video installation about ‘Nefertiti’, the sewing machine that was manufactured and sold in Egypt as a part of the state’s efforts to nationalise industry. The machine was discontinued after it failed to compete with the western sewing machines that flooded the country.  The artist also produced a publication called ‘Needles and Rockets’, which delved into Nasser’s slogan of industrial promise. The trilogy symbolised the Arab dreams of industrialisation post 1952 and how these dreams were buried under unattended failures.

The exhibition is open from 12pm to 8am in Zamalek’s Gypsum Art Gallery, and runs from 14 May to 10 June.