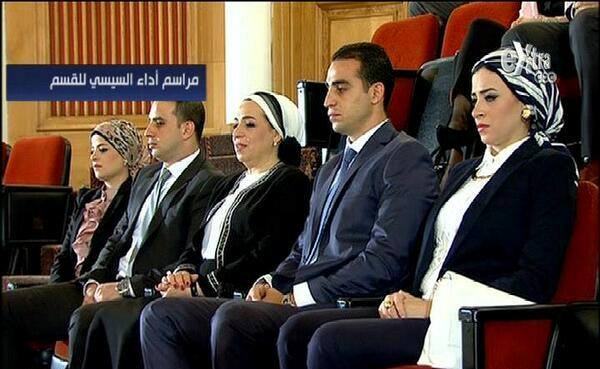 With a subtle smile on her face, hands crossed demurely in her lap, Intisar Amer watched the presidential inauguration of her husband Abdel Fattah Al-Sisi as the new president of Egypt. The new First Lady held her head up high in a smart black and white, Spanish-style hijab. The inauguration was for her as much as it was for her husband.

In Egyptian society, a woman’s dress often correlates with her approach to public life, according to Michael Collins Dunn, the editor of the Middle East Journal.

Jihan Al-Sadat and Suzanne Mubarak, wives to former presidents Anwar Al Sadat and Hosni Mubarak, followed western fashion trends and hairstyles. The first to take on the semi-official title “First Lady”, they were locally and internationally recognised as public figures and were independently active as founders or patrons at schools and charity organisations.

Former president Mohamed Morsi’s wife Naglaa Mahmoud, on the other hand, rejected the title “First Lady”, preferring to be called “Um Ahmed”. She distinguished herself from Jihan Al-Sadat and Suzanne Mubarak with her conservative style and head cover.

When Morsi, an Islamist, appointed Al-Sisi Minister of Defence in 2012, social media blew up with talk that she wore an ultra conservative veil, called a niqab, covering most of her face. The rumours were later dispelled, however, during her first public appearance at an event for retired military officers last February, where she wore a Spanish styled hijab.

After the event, during which she sat silently next to her husband, the public continued to speculate.

Comments were divided between the admiration of Amer’s moderate style and scepticism about the message her appearance could be conveying.

“The Marshal’s wife is a respectable woman given the way she dresses and her hijab,” one Twitter user wrote.

In her subsequent appearances, Egypt’s new First Lady followed mainstream trends. From a leopard-print scarf flowing around her neck matched with a black turban hijab, to the black accessory attached to her white delicate headscarf that goes with her black jacket lined with golden coloured embroidery, to her classic red nail polish and subtle make up, the First Lady’s style is elegant and meticulous.

Her traditional image is not surprising. Al-Sisi, who is portrayed as the strong moderate Egyptian, has continuously stressed traditions and religious teachings during his elections campaign.

Frank Phillips, a retired US Army officer who befriended Al-Sisi in US Army War College in 2006, said Al-Sisi served as an imam for the Muslim students on the course.

“He was religious, but not fanatical,” Phillips said.

Like many Egyptian men, when the president speaks of his wife in public, he doesn’t use her name.

“I have loved her since I was a secondary school student,” said Al-Sisi in a TV interview with ONTV’s Ibrahim Eissa and CBC’s Lamis El-Hadidi. “I promised to propose to her after obtaining the secondary school certificate. We got married after my graduation from the Military Academy in 1977.”