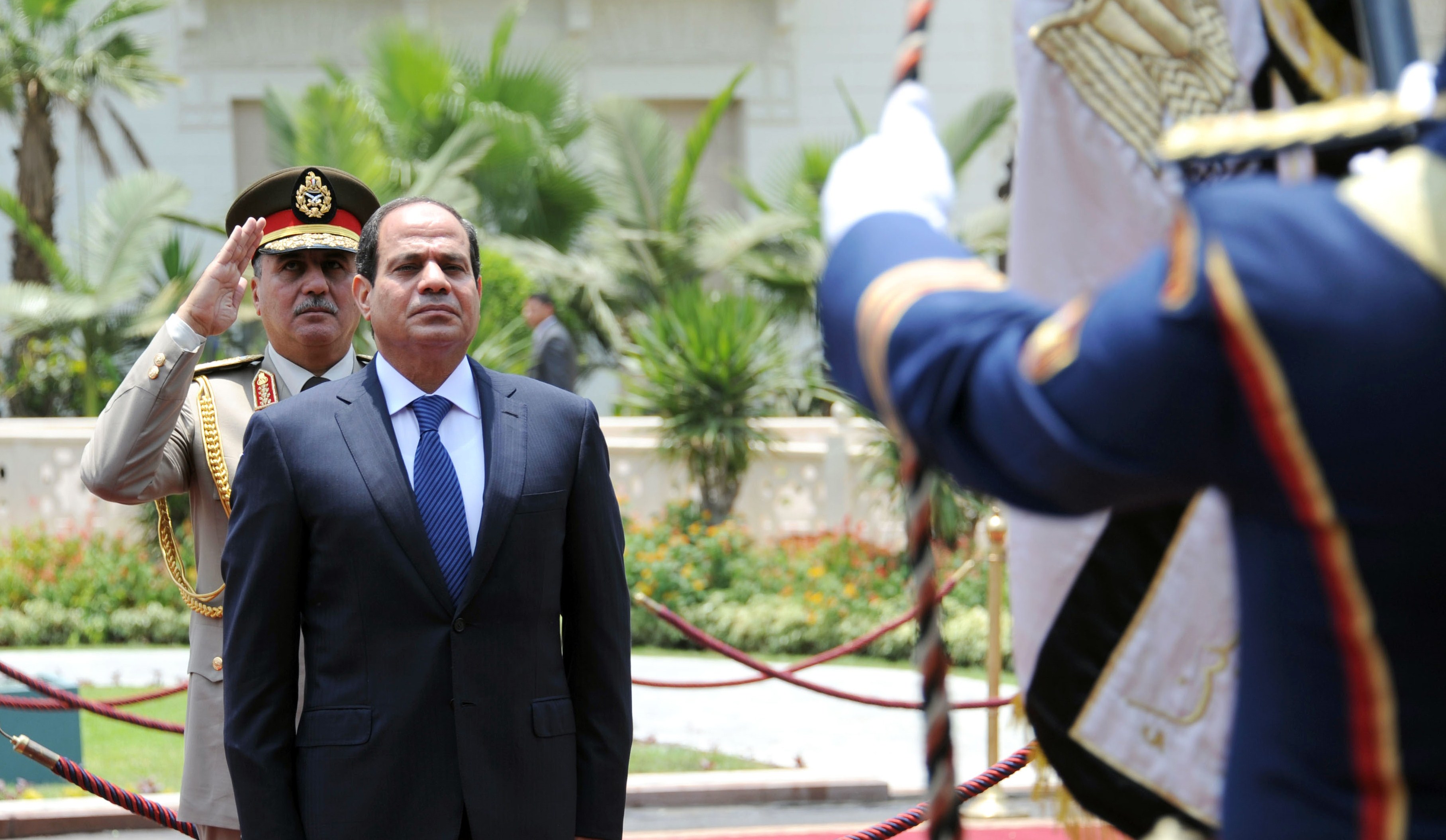 Newly-sworn in President Abdel Fattah Al-Sisi said he would not allow the creation of a “parallel leadership” that would challenge the state’s prestige and jurisdiction, during his speech at the celebration of his inauguration in Qubba Palace on Sunday night.

He called on the state’s institutions to fight corruption in all its forms in the upcoming stage, adding that “there will be no mercy with anyone condemned of corruption”.

Al-Sisi said that all citizens are equal and that all ideologies are accommodated as long as they stick to being peaceful.

The Field Marshal started his speech by saluting “the Egyptian martyrs”, the Egyptian people and the former interim president Adly Mansour, who succeeded in achieving the first two milestones of the roadmap post 3 July.

Al-Sisi vowed to abide by the 2014 “civil constitution”, protect the land and secure the borders of the “civil state of Egypt”.

In his speech he praised the “democratic maturity” of the Egyptian people who proved that Egyptians are “capable of doing more than just the downfall of regimes”. Egyptians voted twice in less than five months.

The social contract between the president and his people, Al-Sisi said would not be based on promises alone, but there would be constant communication regarding the reality of the situation.

Al-Sisi spoke about the past, saying: “Prior to 30 June, our homeland has suffered from a state of polarisation, the misuse of religion and a dire economic situation, a threat to our national security. The ruling regime at the time supported the state of strife instead of dealing with plots that jeopardised regional security of homeland to fulfill deformed visions that oppose Islamic teachings.”

Al-Sisi praised the armed forces for their role in “siding with the will of the Egyptian people”, describing it as the “factory of patriotism” through the ages.

He added that the 30 June “revolution” corrected the path of 25 January. “We will build our country on the basis of social justice and human dignity,” he said. The president mentioned that he would work to take care of the poor and underprivileged.

The former defence minister said that the Egyptian people gave the state its legitimacy through their participation in two revolutions. “I am aware of the heritage of economic injustice…and lack of equal opportunities that the Egyptian citizen has suffered from for decades,” he said.

Putting an end to terrorism and establishing security would be Al-Sisi’s top priorities in the coming period, he said, and pledged to empower the police force by doubling its capacity to establish peace and security.

“I say it loud and clear: there will be no place for those who have shed innocent blood in the new Egypt,” said the former defence minister.

The president added his intention to develop the security system and the skills of those working in it and having a “healthy relationship” between security apparatuses and the people. “Egypt will be ruled by the rule of law which will assure the human dignity of the Egyptian people,” he said. Al-Sisi promised to secure better wages for security personnel to be compatible to what they “sacrifice”.

Al-Sisi pledged to develop the health sectors and said that workers in this sector would have fair salaries, in addition to having new medical facilities. He also added that he intends to develop the educational system which includes students, teachers and facilities. Educational reform will include development of technical education to make it compatible with the needs of the job market.

He further talked about a new administrative division of the governorates and a new transportation network across the country.

The planned economic development needs social and cultural development as well, Al-Sisi mentioned,  a role that he ascribed to  media personnel along with artists to push away “misunderstandings” and motivate the people to work, produce and “set right the popular taste”.

Al-Sisi mentioned that Egypt lacks an artistic piece that manifests the Egyptian revolutions to document the present on an international level.

About renewing religious discourse, the Field Marshal stressed the role of the families and religious organisations to work on raising children with “proper values”. He thanked Al-Azhar and the Church for their role in presenting the “genuine and moderate” religious discourse that would drive away sectarian strife.