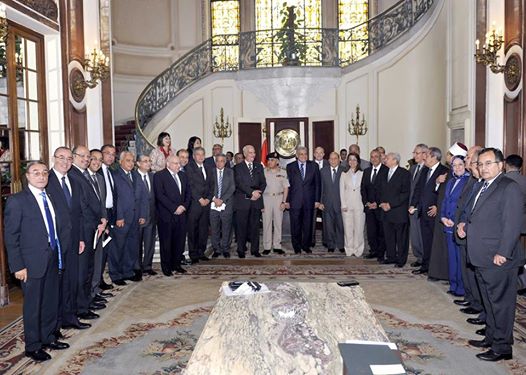 The interim cabinet submitted its resignation to President Abdel Fattah Al-Sisi on Monday morning after which Al-Sisi reappointed Prime Minister Ibrahim Mehleb to form another cabinet.

In the resignation letter submitted to the newly inaugurated president, Mehleb said that he and his cabinet made “every effort to implement the tasks entrusted to us in very difficult circumstances”.

“We tried to take serious steps on the path to social justice and alleviate the suffering of the working classes, the poorest and neediest,” wrote Mehleb. He also thanked the ministers who served in the interim cabinet.

Soon after the cabinet’s resignation was announced state-owned Al-Ahram reported Al-Sisi had appointed Mehleb to be his first Prime Minister.

Mehleb, will be expected to present “the government and its program to the new House of Representatives at its first session”, as per the constitution.

Parliamentary elections are expected to be held later this year.

The outgoing group of ministers was originally formed in the aftermath of the ouster of former President Mohamed Morsi and has undergone one reshuffle. Former interim Prime Minister Hazem El-Beblawi announced his cabinet’s resignation in February, citing the “circumstances” at the time, adding that the decision was taken in “response to the requirements of the current stage”.

Interim President Adly Mansour invited former interim housing minister Mehleb to form a government in which he merged ministries and made some changes to the personnel in the cabinet. Most of the prominent ministers held on to their positions in the reshuffle including Al-Sisi who was serving as interim defence minister. Others who remained in their posts were Minister of Interior Mohamed Ibrahim and Minister of Foreign Affairs Nabil Fahmy.

Mehleb was appointed the CEO and President of the Arab Contractors in 2001, having been appointed by former housing minister Ibrahim Seliman, who is awaiting trial on corruption charges.  He held this position for 11 years, retiring in September 2012.

A former member of the now dissolved National Democratic Party (NDP), Mehleb was appointed to the Shura Council under former president Hosni Mubarak and served on the NDP’s High Council for Policies, alongside Gamal Mubarak.

Mehleb was among those accused of squandering public funds in the renovation of the presidential palace along with Mubarak and his sons.

He graduated from Cairo University in 1972 with a degree in Civil Engineering and joined the Arab Contractors in the same year.

In 1985 he became the Technical Manager of Saudi Arab Contractors Company, a post he held for two years.