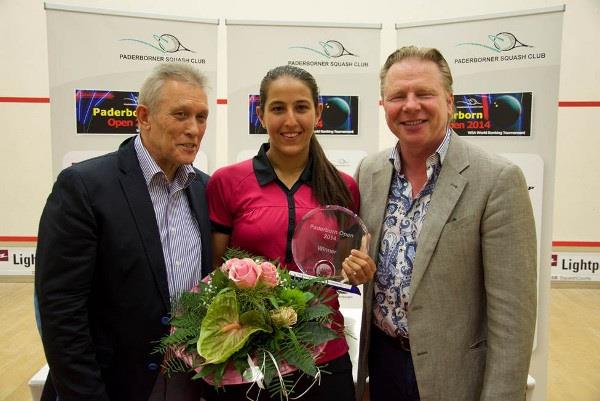 An upset brought the first Tour event to be staged in Germany for more than four years to a climax when Egyptian teenager Habiba Mohamed Ahmed Alymohmed crushed England’s top seed Lisa Aitken in the final of the Women’s Paderborn Open.

The Women’s Squash Association World Tour 5 event attracted players from 13 nations to compete at Ahorn-Squash in Paderborn – home of Paderborner Squash Club, record 10-time winners of the Bundesliga Squash title, and the venue which hosted the Men’s World Team Championship in 2011.

The German crowd witnessed the latest episode in the remarkable career of 15-year-old Alymohmed who, less than a year ago, became the youngest ever winner of a WSA Tour event when aged just 14 years and 5 months.

“Paderborn has been a great platform for my game-plan to win the World junior title in Namibia later this year,” said Alymohmed. “It was so well organised – and something here in Paderborn made me feel special.”

Aitken, who told the organisers it was the best ever ladies squash tournament she had ever experienced, added: “Habiba played well and I found myself not enjoying the game.”