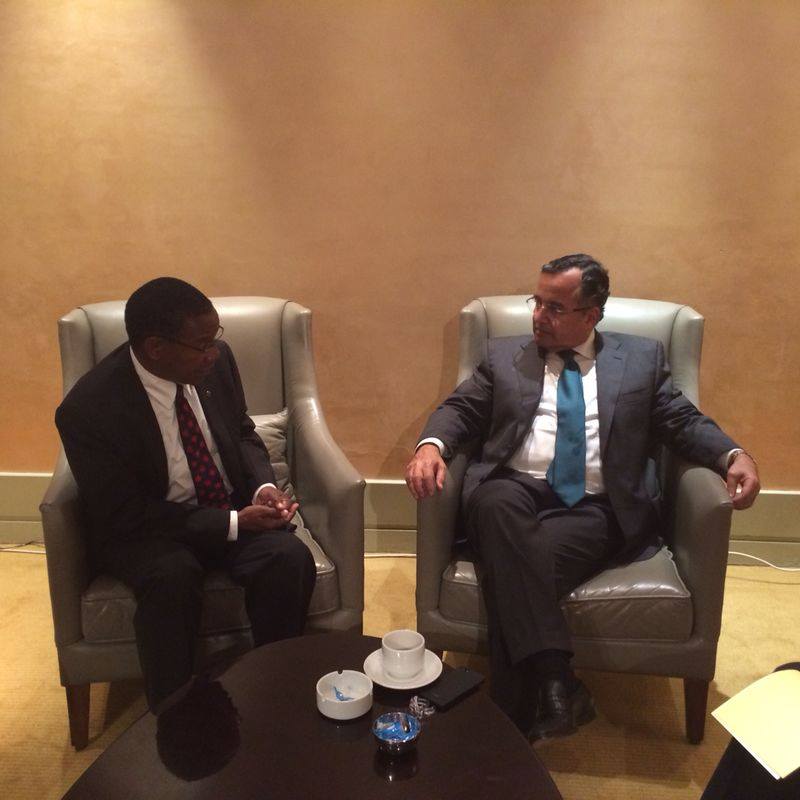 Foreign minister Nabil Fahmy discussed a range of issues relating to Africa, the Nile basin and the Nile water distribution during meetings with three of his African counterparts on Sunday.

The foreign ministers of Ethiopia, Tanzania and Angloa were in Cairo attending the inauguration of President Abdel Fattah Al-Sisi.

Fahmy raised the issue of Egypt’s membership to the African Union with all three Ministers, according to Foreign Ministry spokesman Badr Abdelatty. Egypt was suspended by the African Union Peace and Security Council in response to the ouster of former President Mohamed Morsi last July.

The African Ministers said they would welcome the restoration of Egypt’s membership to the Union, “to exercise its natural and historic role in the activities of the African Union”.

In his meetings with Ethiopian Foreign Minister Tedros Adhanom and Tanzanian Foreign Minister Bernard Membe, Fahmy “emphasis[ed] the importance that the river Nile remains a source of cooperation between Nile Basin countries”. He also emphasised the need to “find solutions to achieve the interests of all states and the prosperity of their peoples without harming the interests of any party.”

Egypt and Ethiopia have been locked in a diplomatic dispute relating the construction of the Grand Ethiopian Renaissance Dam, which Egypt fears will have a detrimental effect on its share of Nile water. Talks stalled recently due to disagreements over the formation of a panel to implement recommendations made by an international panel of experts.

Fahmy also discussed with Membe the Tanzanian initiative to convene a meeting of foreign ministers and irrigation ministers of the Nile Basin countries to review details of the Entebbe Agreement. The meeting would also “take into account the concerns of Egyptian water”. Egypt has refused to sign the 2011 Entebbe Agreement, believing it is does not take into account the needs of downstream countries.

In his meeting with Angolan Foreign Minister Georges Chicoti, Fahmy discussed the convening of a “joint commission” to explore ways of deepening bilateral relations between Egypt and Angola.