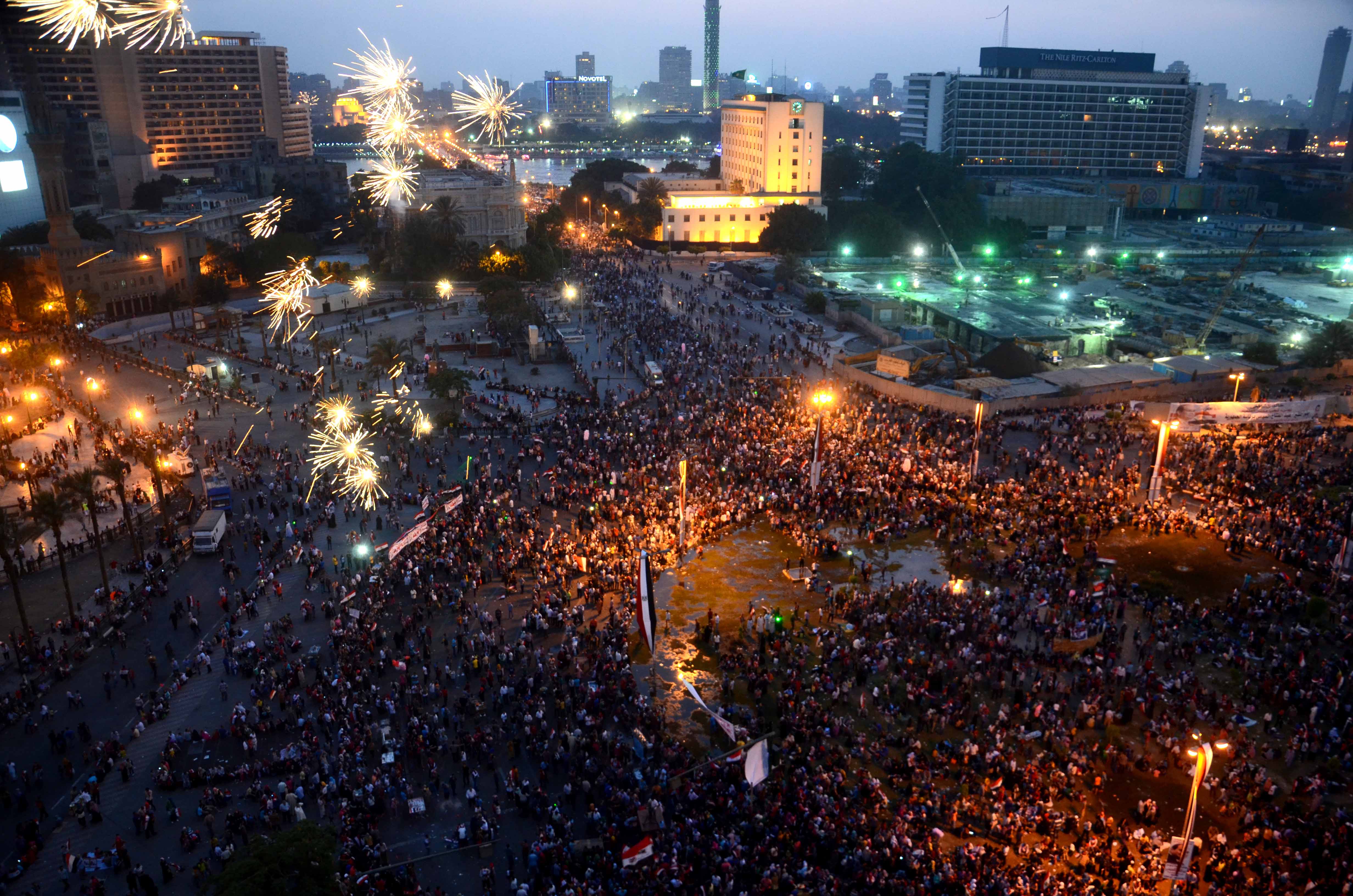 At least five cases of sexual assault were reported in Tahrir Square on Sunday as people flocked to Egypt’s iconic square to celebrate the inauguration of army general Abdel Fattah Al-Sisi, according to anti-harassment group I Saw Harassment (Shoft Taharosh).

Al-Sisi’s inauguration ceremony took place over the course of the entire day. He swore the oath in front of the Supreme Constitutional Court in the morning, arrived in the Itihadiya Palace in the afternoon and delivered a national address from the palace in the evening.

I Saw Harassment condemned the recurring phenomenon of sexual assault amid large assemblies in a statement released on Monday. The group said that out of the five cases of assault reported to the group on Sunday, four cases needed medical support and were therefore hospitalised, and the fifth case needed psychological support.

The Ministry of Interior, meanwhile, arrested seven men in light of sexual harassment reports. Interior ministry spokesman Hany Abdel Latif said two cases of sexual harassment, not assault, were reported to the ministry from Tahrir Square. The ministry said in a press statement that a police officer was injured while arresting the said assailants.

I Saw Harassment received at least six more reports of sexual harassment in other locations, according to the group’s coordinator Fathi Farid. The group was, nevertheless, not present in those locations to verify the authenticity of the reports.

A video documenting one case of sexual assault in Tahrir Square went viral on Sunday night. The video shows a woman being subjected to mass assault after she is stripped naked, with security personnel trying to drive the assailants away. The Daily News Egypt was unable to track the time the video was taken.

The state-affiliated National Council for Women (NCW) condemned the aforementioned assault in a statement released on Monday, describing it as “barbaric”.

The council stressed that “unknown” actors with “certain interests” are behind such incidents of “organised” sexual assault to “spoil Egyptians’ joy” and “distort” the “democratic” process Egypt is witnessing in front of the international community.

“Such shameful and unethical behaviour cannot stem from the honourable Egyptians who have revolted in January 2011 and on 30 June last year,” the NCW statement read. The council added that during both uprisings, “Egypt was packed with millions [of protesters] for days without witnessing a single case of sexual harassment.”

During the weeklong protests which preceded the ouster of former President Mohamed Morsi on 3 July 2013, anti-harassment groups reported the occurrence of at least 101 cases of alleged sexual assault in Tahrir Square.

The NCW called on the Ministry of Interior to “immediately” investigate the case of sexual assault documented in the aforementioned video. It also stressed the importance of the “heavy” presence of civilian police forces amid “popular assemblies” to prevent the recurrence of such “horrendous” incidents.

I Saw Harassment condemned the Ministry of Interior for failing to install security measures to combat sexual harassment ahead of the inauguration celebrations. It accused the ministry of leaving security personnel without any tools or “clear plans” to combat the incidents of sexual harassment, adding that a number of security personnel from the Qasr Al-Nil Police Station were injured as a result.

The ministry had installed electronic gates outside the main entrances to Tahrir Square in preparation for Sunday’s planned demonstrations. I Saw Harassment said in its statement that the gates were removed at sunset, whereas the celebrations continued.

The anti-harassment groups called on all citizens who witnessed any cases of sexual harassment during the inauguration celebrations to issue their testimonies and report the incidents.

The law was described as an “important yet insufficient step in fighting harassment” by Fatma Khafagy, NCW Director Ombudswoman for Gender Equality.

Egypt’s women’s rights organisations have long been calling for laws to address the proliferating phenomenon of sexual harassment.

The NCW has already drafted a law addressing violence against women, submitted to Morsi’s administration last year. It was resubmitted to Mansour, but was never issued.

I Saw Harassment is pushing for legislation that would criminalise sexual harassment and violence against women. The initiative drafted a letter last Monday to Egypt’s incoming president, calling on him to make this legislation a priority.

A report issued by the United Nations Entity for Gender Equality and the Empowerment of Women in April 2013 revealed that an overwhelming majority of Egyptian women (99.3%) have experienced some sort of sexual harassment, and 96.5% of women had been sexually assaulted.