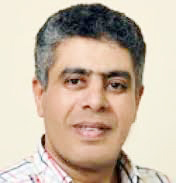 Field Marshal Abdel Fattah Al-Sisi was sworn in Sunday and has officially become the country’s president. All eyes have turned to him to pull Egypt out of its unprecedented crisis.

Experts and observers have all been talking about what the first decision taken by the new president will be.  Most of their choices have been sound. No one disagrees, for example, that security needs to be restored before anything else, as this is a necessary starting point for taking any other action, whether political or economic. And no one disagrees on the importance of developing education, health and other services.

Restoring security is a comprehensive demand, but it won’t be achieved immediately by any decision or completed overnight. This is something that will require weeks, and possibly months, before people feel its effects.

Therefore, I hope that the first decision issued by Field Marshal Al-Sisi is to release youth that were detained since 3 July.

The youth I am referring to here are those who demonstrated against the government and its policies, or against 30 June, or rejected the Protest Law, and those who belong to all political currents, including the Brotherhood, as long as they were not involved in acts of violence, terrorism or destruction.

Here I refer to Ahmed Douma, Ahmed Maher, Mohamed Adel, the youth of the Misr Al Qawia (Strong Egypt) Party, and their ilk.

The call to release these individuals does not mean approval of the legal mistakes they made, nor does it mean converting what they did into a principle that may be repeated.

The majority of these individuals demonstrated on 30 June against Muslim Brotherhood rule, and what they want is a fair democratic civil state.

The goal of having Field Marshal Al-Sisi take this quick decision is for him to put an end to the state of tension and unjustified conflict with the youth, and for both sides to start on a new page.

And if the resolution included Muslim Brotherhood youth from the universities, this would be a masterstroke. It would send a message to them, and to the community, that the president fears for their future and is giving them a second chance.

Some will respond immediately by saying: “How can you demand the release of terrorists and saboteurs?”  And to this I say that any Muslim Brotherhood member that demonstrated in the street and in the university and who did not destroy anything or vandalise property must be given a chance. We should not destroy their future and their family’s future.

The same is not true of the types of students who stormed the dean’s office at the faculty of law at Cairo University, or the colleges and facilities of Al-Azhar, Ain Shams or elsewhere, wreaking havoc and destroying property. These types of students will not be tolerated.

These individuals—at the moment they began acting with this sort of logic—reneged on their identity as students and became terrorists. Tolerance for these students would send a message to others to repeat the same actions.

The state will not lose anything if it releases the youth it disagrees with. On the contrary, by doing this it will gain a lot, particularly the confidence of those who are released and their colleagues, even if they continue to the oppose the state, so long as this is done within the framework of the law.

Some will say: “What if those released return to breaking the law?”

The answer is simple. They too must be dealt with according to the law. And if they break the law, they won’t garner any sympathy from the people or public opinion.

The initiative to release these individuals means the state has confidence in itself, fears for the future of its children, and most importantly, means that there is hope for the future.