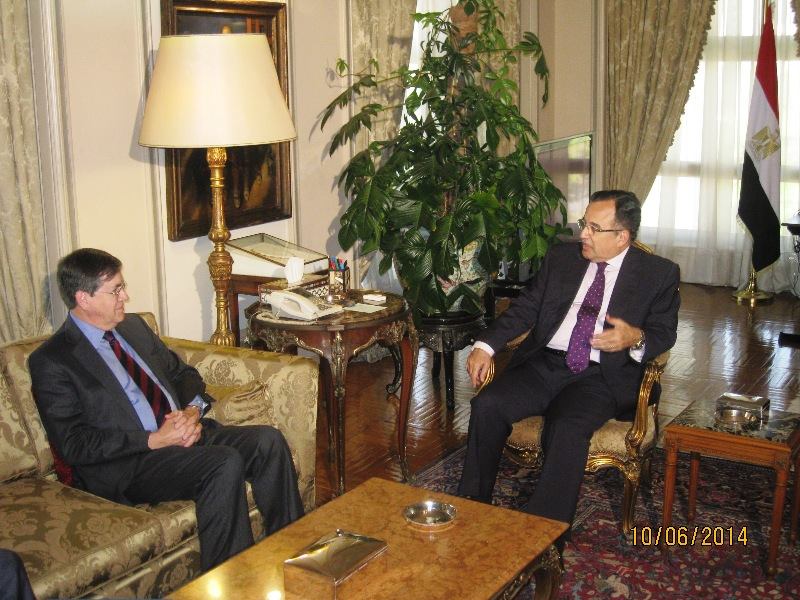 Minister for Foreign Affairs Nabil Fahmy met  Unites States’ Ambassador to Libya David Satterfield to discuss Libya’s recent political and security developments on Tuesday, according to a statement by the foreign ministry.

The ambassador, the statement said, talked about his country’s stance on the situation in Libya, which is witnessing increasing instability and growing power of militant groups.

Satterfield is coordinating with regional and international envoys, such as those of the United Nations and European Union, to stipulate basic governing principles for Libya, based on repelling violence and terrorism and enabling control of the Libyan government, the statement read.

Reconciliation and splitting authority and wealth among the Libyan people, should be part of Libya’s policies, he said.

Fahmy told the US ambassador that the different Libyan sides should resort to talks and stand by the will of the Libyan people to protect the country’s unity.

Fahmy presented the results of two foreign ministers meetings with neighbouring and Arab countries that took place in Algeria. On Monday, the envoy for the secretary-general of the Arab League in Libya, Nasser Al-Qodwa, had shared these results in a meeting with Fahmy.

The Arab League envoy and Fahmy discussed the league’s efforts to acquire stability in Libya, according to a Tuesday statement of the Egyptian foreign ministry.

The foreign minister stressed in his meeting with Al-Qodwa Egypt’s commitment to exert all efforts to maintain Libya’s unity. He added that a plan should be put to regulate its borders and acquire political and security stability.

In both meetings Fahmy talked to about Egypt’s stance, expressing its concern on the increasing extremism and violence in Libya, and the spread of weapons in the hands of “groups that are outside the framework of the Libyan government.”

On Saturday, Egypt had shut down the Salloum border crossing between Egypt and Libya for trucks in both directions.

Last month, President Abdel Fattah Al-Sisi described Libya as one of the security threats Egypt is facing, especially in the light of “fighting terrorism”, in an interview with Reuters.