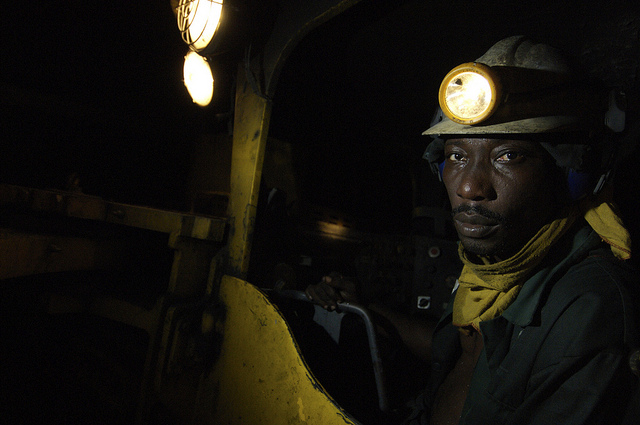 The Hollywood blockbuster movie, Blood Diamond, tells a gripping story of how diamonds fuelled Sierra Leone’s 11-year civil war which erupted in 1991.  It depicts kidnappings, use of child soldiers, amputations, rape, killings and destruction of bridges and hospitals, among other atrocities.

The movie, starring the American star actor Leonardo DiCaprio, Jennifer Connelly and Djimon Hounsou, brought world attention to the campaign against “blood diamonds,” described by the United Nations as diamonds used to fund war against governments. Sadly, West and Central Africa have been fertile grounds for blood diamonds, notes the World Diamond Council, a body that represents the diamond trade.

One often hears that mineral resources are a curse rather than a blessing. That may be an exaggeration, but for the people of the Central African Republic, currently caught up in a war fuelled by diamond mercenaries, the statement rings true. Conflicts in the Democratic Republic of the Congo (DRC), Sudan and South Sudan have also been linked to the fight over control of mineral resources.

East Africa bureau chief of the New York Times, Jeffrey Gettleman highlights the curse/blessing dichotomy, the DRC, he points out, has an “embarrassment of diamonds, gold, cobalt, copper, tin … trillions’ worth of natural resources” including deposits of tantalum, an element used in computer microchips. “But because of never ending war, it is one of the poorest and most traumatised nations in the world.”

Other mineral-rich countries like Zambia, Mozambique, Mauritania and Guinea while not at war, present an unnerving paradox of poverty amidst plenty. Guinea has “some of the planet’s most coveted mineral stocks,” writes the Financial Times, including 40 billion tonnes of bauxite, the world’s largest reserve, over 20 billion tonnes of iron ore, diamonds, gold and undetermined quantities of uranium. But 55% of Guinea’s 11 million people live on less than $1.25 per day, states the Africa Development Bank (AfDB), while it ranks 178 out of 187 countries on the 2013 UNDP Human Development Index, a measurement of a country’s living standards.

Guinea’s mineral wealth and its socioeconomic situation mirrors that of the continent. The UN Economic Commission for Africa (ECA) data show that the continent has 54% of the world’s platinum, 78% of its diamonds, 40% of its chromium, 28% manganese, among others. “Nineteen out of 46 countries in sub-Saharan Africa have important reserves of hydrocarbons, oil, gas, coal or minerals and 13 countries are in the process of exploring additional reserves,” notes the UNDP. Yet the World Bank says Africa is the world’s poorest continent.

Carlos Lopes, ECA executive secretary, insists in a blog post that “Africa’s natural resource is a blessing and not a curse,” but wonders why “the continent continues to struggle with limited economic transformation, low or no resource rent and scarce employment.” It should be a blessing, says AfDB—a rather polite way of saying the blessing has been slow in coming.

In 2009 African Union (AU) leaders adopted the African Mining Vision (AMV), a well-crafted framework for developing mineral resources. The AMV makes a number of recommendations, including better negotiations of mining deals, more attention to the environment, value addition to natural resources and capacity training for Africans. Its goal is to ensure countries earn more from mineral resources to stimulate socioeconomic growth. Mining earnings should be invested in roads, rails, ports, energy, water and telecom and there should be more resource-processing local industries, a knowledge economy and an active service sector. The AMV envisages institutions strong enough to stem illicit financial flows.

Participants at the Maputo conference spoke with unusual candour. Antonio Pedro, director of the ECA sub-regional office for Eastern Africa, chided the ministers: “The continent is impatient, expectations are high and benefits are not equally felt.” The buzzword was “reform,” which is a word elastic enough to mean renegotiating, if need be, existing mining deals or increasing mining taxes. Fatima Denton, of ECA’s Special Initiatives Division, underscored that contract negotiations to must “reflect the true worth of our resources,” inferring that this hasn’t been the case. She is probably right because an expert committee that reviewed 61 mining deals in the DRC announced in 2009 that they were all bad deals. It recommended cancelling 22 of those deals and renegotiating 39.

Renegotiating deals can be problematic even if reasonable because companies want to a generous return on their investments. Mr. Lopes argues that the “average net profits for the top 40 mining companies [in the world] grew by 156% in 2010” while earnings for governments “grew by 60%, most of which was accounted for by Australia and Canada.”

Zambia, the world’s seventh largest copper producer, until recently had been making half-hearted attempts to amend mining deals over the years. Facing pressure of legal threats from foreign investors for breaching agreements, former President Rupiah Banda decided against a review of existing contracts, to the disappointment of Zambians. Then, in 2009, he removed a 25% windfall tax that had been introduced by his predecessor, Levy Mwanawasa, in 2008.

Current President Michael Sata appears to be taking a different approach. Since 2011, his government has been charging a 30% corporate tax on mining companies, up from 20%. This had the effect of doubling Zambia’s mining receipts to $1.36 billion in 2011 compared with 2010, although strong demand for copper from China and an uptick in prices have also been responsible for the higher earnings.

In the case of Mali, by contrast, reforms have been slow and tentative. The government introduced a mining code after the 2012 elections that addressed mainly environmental issues. Guinea’s 2011 mining code is even more robust than Mali’s, mandating mining companies to sign a code of conduct against corrupt practices and to provide training for local employees. It also sets a 35% government ownership threshold for mining projects. “The code gives a correction to the old one for Guinea’s interest,” says Guinea’s mines minister, Lamine Fofana.

Some experts advise against changing the terms of existing agreements midstream. Ghana’s national chamber of mines is fiercely pressuring government to abandon the increase in corporate tax from 25% to 35% and a 10% windfall tax. However, the chamber is at loggerheads with the National Coalition on Mining, a civil society group, which supports the tax hikes. The African Agenda, a Ghanaian publication, writes: “The mining companies [in Ghana] are now the only stakeholders … who maintain that the status quo be maintained to ensure they continue to reap super-normal profits.” The publication urged President John Mahama to hold the line against lowering of taxes. “Be resolute… we will be with you every step of the way,” urged an editorial.

Like Zambia, Ghana’s mining receipts rose sharply, from $210m in 2010 to $500m by 2011, according to the Extractive Industries Transparency Initiation (EITI), a coalition of governments and civil society working to improve transparency in the management of natural resources.

Due to special extenuating circumstances in individual countries on contracts and political leadership, the Ghanaian and Zambian examples may not widely apply. Nevertheless, Africa is receiving help from Canada, Australia and Chile—countries that have achieved success in mineral resources management. Canada recently established the Canadian International Institute for Extractive Industries and Development at the University of British Columbia to assist developing countries “to meet their respective needs for governing and managing the extractive industry sector.” It plans to offer fellowships and scholarships for government personnel, academics and graduate students.

The Australian government also supports companies operating in Africa and provides capacity building and social infrastructure aid in Africa. China is assisting with rail, hospitals, road and ports in mineral-rich countries such as Angola, Zambia, Sierra Leone and Mali.

. The AMV wants “transparency in the collection and use of mining revenues.” Although commodity prices have dipped lately following a slowdown in the Chinese economy, according to the Financial Times, this could be cushioned by steady demand from India and Brazil. In addition, the European Union is ready for what it terms “raw materials diplomacy” to secure future supplies through an arrangement with the AU. The US National Research Council, a think tank, has advised its government to “understand the non-fuel minerals that are important to the nation’s economy and functions.”

Last year, Norway agreed to provide the AfDB $4.9m to assist the bank’s Legal Support Facility negotiate better oil, gas and mining deals on behalf of African governments. Heikki Eidsvoll, Norway’s minister of international development say his country wants to “help turn Africa’s ‘resource curse’ into a ‘resource blessing.’ “And the World Bank, the IMF, the EITI and African civil society are on board the AMV bandwagon.

With 22 African countries (out of 32 worldwide) adopting EITI standards, which require all information on mining to be made available to the public, analysts believe there is more transparency in the sector than before. In Gabon, armed with necessary information, civil society organisations now vigorously debate revenue management, which never used to happen. In Nigeria, there is an improvement in the “monitoring and management capacity of the relevant government agencies,” says an EITI statement, adding that Cameroonian government officials and NGOs now understand taxation, accounting and audit.

Nkosazana Dlamini-Zuma, the AU Chairperson, says that Africa’s future “will be determined by the manner in which we utilize our natural resources.” That message should spur African leaders and the mining companies to turn Africa’s mineral resources into a blessing.