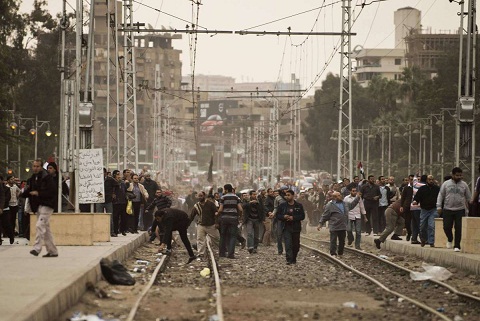 On Wednesday the Cairo Criminal Court postponed to 22 June the trial of former president Mohamed Morsi and several other leading Muslim Brotherhood members facing charges of inciting the killing of 10 protesters during deadly clashes outside the presidential palace in December 2012.

When the court resumes later this month, it is expected that additional eyewitness testimony will be heard, reported state-run Al-Ahram.

Morsi is also the co-defendant in three other trials: escaping from Wadi El-Natrun Prison on 28 January 2011, insulting the judiciary, and for espionage by working with foreign Islamist groups to “create chaos” in Egypt.

Morsi is yet to receive a verdict in any of his trials.

On 28 April, Supreme Guide Badie was among 683 defendants to receive a death sentence from the Minya Criminal Court, accused of killing two police officers and breaking into a police station on last summer on 14 August.