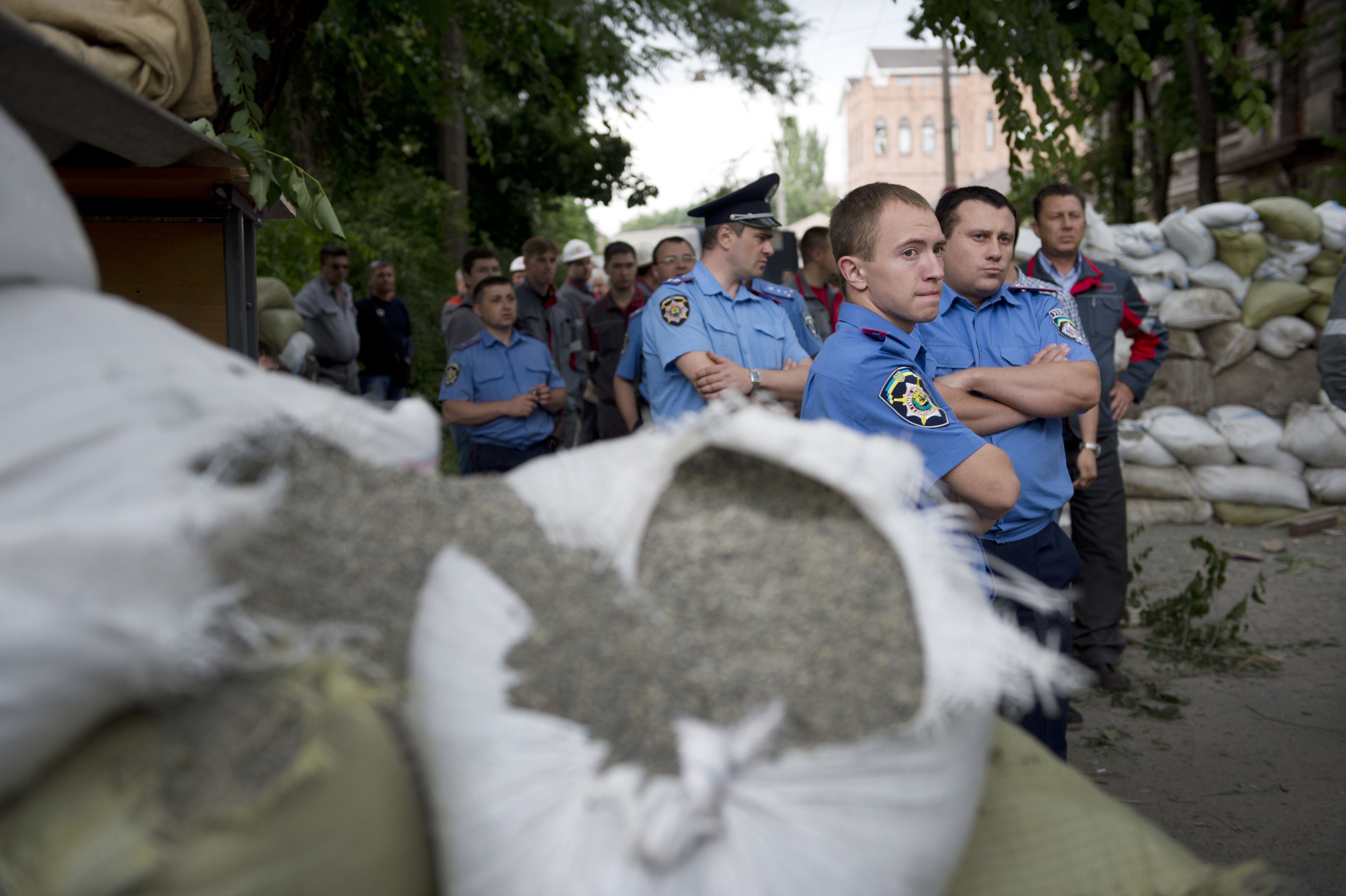 AFP – Pro-Russian rebels shot down a Ukrainian military transport plane Saturday in the separatist east, killing all 49 troops on board in the biggest single loss of life in the two-month insurgency.

The attack came hours before top Moscow and Kiev officials were expected to meet in the Ukrainian capital for 11th-hour gas negotiations aimed at averting an imminent cut in Russian supplies that would also impact large swathes of Europe.

The early morning downing near the airport of the rebel stronghold city of Lugansk came a day after Ukrainian forces notched their biggest success in a deadly campaign to reunify the splintered nation by reclaiming control of a strategic south-eastern industrial port.

The United States on Friday accused Russia of helping in the insurgency by sending tanks and rocket launchers to the pro-Moscow rebels, a charge denied by the Kremlin.

Closed-circuit camera footage of the downing showed a small flash flare in the sky when the large Il-76 plane was hit by what Ukrainian officials said was heavy-calibre machinegun fire.

About 30 seconds later, a massive second burst of light lit up the horizon when the plane apparently exploded upon hitting the ground while approaching the Lugansk airport.

“The terrorists cynically and treacherously fired with a large-calibre machinegun hitting an Ilyushin-76 of the Ukrainian air force which was carrying troops on rotation and was about to land at Lugansk airport,” the ministry said in a statement.

A spokesman for the Lugansk militants claimed rebel responsibility for the attack, telling Russia’s RIA Novosti state news agency the plane had been downed with a surface-to-air missile.

The European Union immediately expressed its support for new pro-Western President Petro Poroshenko’s escalating campaign to stamp out the insurgency, with Council of Europe Secretary General Thorbjoern Jagland saying he was “shocked and deeply concerned” by the attack.

“President Poroshenko knows he can count on our support,” Jagland said in a statement.

An AFP correspondent heard heavy fighting and a series of loud explosions in the hours preceding the 1am downing in Lugansk, a city of 400,000 lying just 25km (15m) west of the Russian border.

The industrial centre has been under effective rebel control since the eastern uprising began in early April, but Ukrainian forces had managed to hold on to its airport and use it to rotate equipment and troops serving in the campaign.

Yet they have been forced to repel an increasingly frequent series of raids on the air hub by the gunmen, who had also briefly seized the main international airport in the neighbouring rebel-held city of Donetsk at the end of May.

The two-month insurgency is now known to have claimed at least 320 lives of civilians and fighters on both sides.

Poroshenko’s troubles have been compounded by the threat of Ukraine being cut off from economically-vital Russian gas shipments as early as Monday morning because of a bitter price dispute.

Prime Minister Arseniy Yatsenyuk told regional administrations and the heads of the state energy company on Friday to prepare for the consequences of a possible gas cut by implementing a plan for reduced energy use.

Ukraine receives half its gas supplies from Russia and transports 15% of the fuel consumed in Europe. Moscow had nearly doubled the price it charges Kiev for the fuel in the wake of the February ouster of a Kremlin-backed president.

The head of Ukraine’s state energy firm said Kiev was ready to make a $1.95bn (€1.45bn) payment demanded by Moscow by Monday morning if Russia agreed to cut its price to $326 from $485.50 for 1,000 cubic metres of gas, but Russia had on Friday rebuffed EU efforts to set up last-gasp negotiations in Kiev.

But Ukraine’s Energy Minister Yuriy Prodan told AFP that “the Russian side has given its preliminary agreement to attend” new EU-brokered talks in Kiev on Saturday.

The United States on Friday accused Russia of sending tanks and rocket launchers to the rebels in the wake of Western-backed tycoon Poroshenko’s victory in a 25 May presidential election.

Poroshenko had told Russian President Vladimir Putin on Thursday that the tanks’ crossing into Ukraine was “unacceptable”.

Russia called the tank reports “disinformation”, but Washington backed Kiev’s claim, saying that the separatists had also obtained multiple rocket launchers from Russia among other heavy weapons and military equipment.

NATO chief Anders Fogh Rasmussen warned that reports of pro-Russian groups acquiring heavy weapons from Russia would mark a “serious escalation” of the crisis if confirmed.

Top Ukrainian and Russian envoys have held a week of discussion in Kiev aimed at brokering a truce in the conflict and helping repair ties between the two uneasy ex-Soviet neighbours.

The State Department’s Harf said the two sides would meet again this weekend, raising the prospect of further Western economic sanctions if Russia failed “to demonstrate its commitment to peace, to stop weapons and fighters from crossing into Ukraine, and to cooperate with Ukraine in the peace plan’s implementation.”