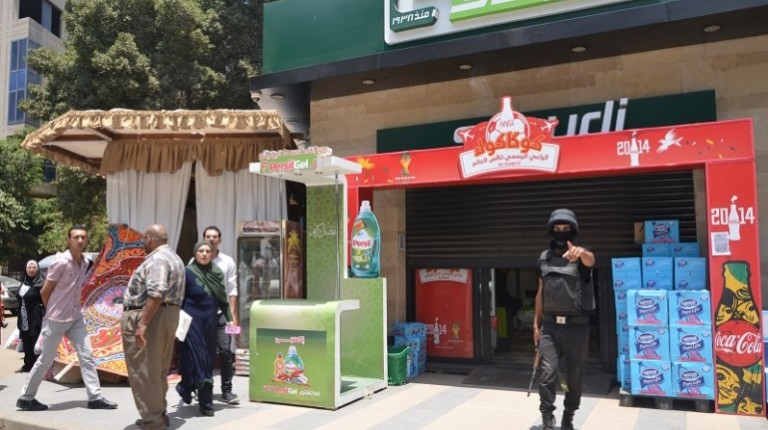 The raid follows a decision by a committee, headed by Wadih Hanna, to assess Muslim Brotherhood funds and to confiscate these properties.

Workers at a Seoudi company branch in Dokki expressed by security forces forcing them outside and closed the shop for inspection.  “We do not know the reason behind this,” said one employee. “We were surprised by police raiding the branch and shutting it down.”

One of the officials in the branch affirmed that he did not issue a closure decision, with the branch’s reopening “possible”.

An official source within the judiciary said that the Egyptian Company for Wholesale, affiliated to the Food Industries Holding Company, will take charge of Seoudi and Zad markets, noting that both markets will reopen after taking inventory.

He added that the employees of the supermarkets will receive their salaries and all their dues.

In December 2013, the Egyptian government banned Muslim Brotherhood activities and formed a committee to assess and confiscate their funds and property. The measure came as part of a series of actions taken by authorities against the group since the overthrow of the former president Mohamed Morsi.

Among the 527 members of the group whose money the government decided to confiscate are former president Mohamed Morsi and businessmen Khairat El-Shater and Abdul Rahman Al Saudi.

Khairat El-Shater and Hassan Malek are among the most prominent businessmen in the Muslim Brotherhood and own a range of commercial activities. These cover fields as diverse as clothing and furniture, such as Sarar, Rawag Logisitics, Istikbal Furniture, Al-Shihab Cars, and Ajyad Services

The Egyptian government has not yet issued a decision to close these activities.

Officials within the judiciary interpreted Sunday’s store closures as the committee’s attempt at limiting Muslim Brotherhood funds and taking custody of their finances and administration. The process will continue, they said,  until there is an extensive investigation into the sources of funding for Brotherhood activities.

According to Major General Sayed Shafiq, Public Security assistant in the Minister of Interior, the closure of Seoudi shops was based on the judicial decision to impound these properties.

He added that security forces will continue to impound these shops and guard them with security patrols while awaiting further instructions from the concerned bodies.

“The government at that time decided to confiscate the Brotherhood’s funds so as not to allow them to spend money on their election campaign,” the Seoudi official said. “Since then, the businessmen learned their lesson and decided to remove themselves from their economic activities, so their positions became ceremonial ones, and this way the decision to confiscate would not impact them.”

In October, the cabinet formed a committee to assess the funds of all institutions and entities affiliated with or established by the Muslim Brotherhood, whether they be supported financially or otherwise. This included organisations that receive donations from the Brotherhood and employ a member of the Brotherhood or an organisation. This would be regardless of whether the funds were liquid, real estate, or movable property, in order to impound them.

Seoudi Market operates five branches in Dokki and Sheikh Zayed, a branch in Mesaken Sheraton, and two branches Maadi, with a total of 26 branches across Egypt.

Aly Hisham, a member of the Foodstuffs Division of the Cairo Chamber of Commerce, said that branches of Seoudi Market target mainly high-income earners in upscale areas and account for as much as 15% of this market.

Hisham added that competing chains such as Metro and Carrefour will most likely benefit from the closure of Seoudi as the supermarkets are located in the same areas, and because the action comes in the lead-up to Ramadan where food demand will rise.