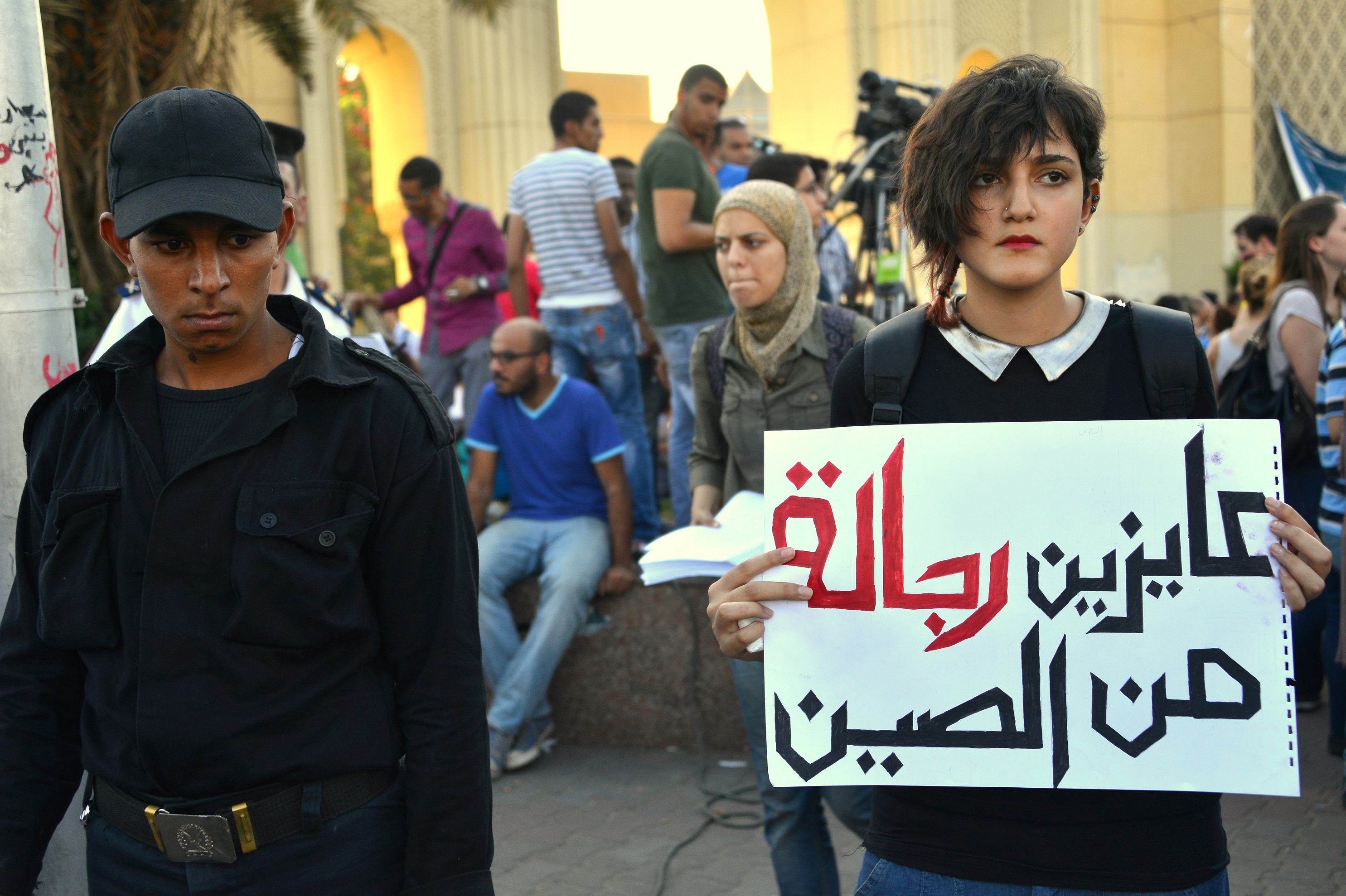 A group of anti-harassment movements announced Sunday their presence in future gatherings in Tahrir Square to combat mass sexual assault, regardless of their agreement or disagreement with causes for demonstration.

Operation Anti-Sexual Harassment, Tahrir BodyGuards Movement, Imprint Movement and Against Harassment Movement announced during a press conference the formation of an anti-harassment union.

Nationwide anger spiralled at reported cases of sexual assault in Tahrir Square, after a video documenting one case of assault went viral last Sunday. The video shows a woman being subjected to mass assault after being stripped naked, with security personnel trying to drive the assailants away.

The prosecutor general’s office said it interrogated three suspects for sexually assaulting a 42 year-old woman and her daughter in Tahrir Square on 3 June. The assault took place as demonstrators gathered in Tahrir Square to celebrate Abdel Fattah Al-Sisi’s official confirmation as president.

The newly founded union promised to do their utmost to prevent further cases of sexual assault. It is to set to be active starting 30 June, when demonstrations are scheduled to commemorate last year’s mass protests which led to the military ouster of former President Mohamed Morsi.

The union stressed that securing Tahrir Square is the responsibility of security forces, calling on the Ministry of Interior to “create the necessary conditions” for them during their presence. The groups stated that they were absent from previous demonstrations in the square due to the presence of security forces, whom they believed would be capable of preventing mass sexual assault.

Mozn Hassan, Executive Director of Nazrah for Feminist Studies, said that last week’s reported cases of sexual assault are not the first of their kind. She added that a development in the pattern of sexual violence against women could be noticed throughout the past two years.

Salma Al-Tarzy, from Operation Anti-Sexual Harassment, said the state and media’s handling of the issue of sexual violence as “individual” cases contributed to the proliferation of the phenomenon.

“It is sad that we have been saying that [mass sexual assault is a recurring incident] for two years and yet the state is negligently handling the matter,” Al-Tarzy said. She noted that the number of police forces securing the 3 and 8 June demonstrations, when cases of mass sexual assault were reported, was notably low.

Al-Tarzy also blamed state institutions for hindering the process of saving sexual assault survivors. She claimed that military police has attempted to conduct a virginity test on an assault survivor at least once.

Al-Tarzy added that should the survivor be admitted to a public hospital, she will not be medically examined until the Forensics Authority arrives, usually not before 6am, regardless of the patient’s condition. In most cases, incidents of mass sexual assault occur at night.

The interior ministry expressed plans to assemble an “integrated security team” that would focus on curbing sexual harassment and assault. It added that it would increase the number of personnel working in its human rights division in coordination with the National Council for Women.

Magda Adly, head of Al-Nadeem Centre for Management and Rehabilitation of Victims of Violence, cast doubt on the Ministry of Interior’s seriousness in combatting sexual violence against women.

In order to fight sexual harassment and assault, Adly said the interior ministry should be restructured and all old cases of assault, dating back to Mubarak’s era, should be investigated.

During a visit to a victim of sexual assault in hospital, Al-Sisi vowed that “as a state, we will not allow for this to happen again”. He added that “firm” measures will be adopted to face this phenomenon.

Al-Sisi apologised to the sexual assault victim and to “all Egyptian women” on state television, saying that “even a single case of assault is unacceptable.”

Adly said that the president should apologise for all previous cases of sexual assault on behalf of the state.

Sexual violence in Tahrir Square drew international ire from countries including the United States and France, the latter calling it “despicable”. Commitments by the Egyptian government to bring the perpetrators to justice were welcomed.

A report issued by the United Nations Entity for Gender Equality and the Empowerment of Women in April 2013 revealed 99.3% of Egyptian women have experienced some sort of sexual harassment. The report also added that 96.5% of women had been sexually assaulted.