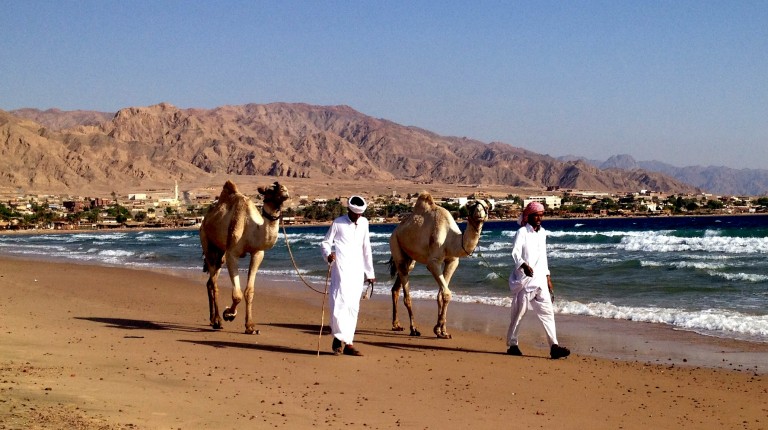 To read the news, the Sinai Peninsula can often appear no more than a haven for militancy, smuggling and unrest.

Sofian Noor and Mondi Soliman would like to show visitors the other side of the region – by inviting you into their homes. Together, the two men launched a tourism company the Bedouin Way in March.

“Like anywhere, there is the good and there is the bad,” Noor said. “The problem with Sinai, is that only the bad side is shown”.

The negative stereotypes can be traced back to the 80s and 90s, he said, when poverty, more than 50% unemployment, and socioeconomic marginalization hit the people of Sinai, prompting many to turn to illegal methods for income, including smuggling. The peninsula has attracted a lot of attention in recent years as being a hideout for militants. After a tourist bus was bombed in the South Sinai city of Taba this year, Britain, France and several other countries warned its people against visiting the peninsula.

But Noor said political turmoil should not hinder a visit to Sinai. The Bedouin Way is based on the peninsula’s southern tip, which is largely free of the security issues that riddle the north. Before the Taba incident, the area had reported no trouble since 2009.

“Most of what is portrayed in the media is incorrect,” Noor said.

The Bedouin Way aims to show the good side of Sinai. They want people to get up-close and personal with its dark skinned, thick accented mountain residents, and their simple yet fascinating life.

“We respect the Western culture, and ask for respect to ours in return,” Noor said.

The tour company offers 25 different packages on the peninsula, ranging in length from one to ten days. If you stay overnight, you camp under the stars in the quiet, embrace of those alluring mountains. If you are in a hurry, spend a relaxing evening in whichever location desired and enjoy the distinguished Bedouin music and a Bedouin meal.

You could go hiking, rock climbing, camel trekking, wood collecting, or on a morning safari where you suddenly find yourself in an oasis among its inhabitants.

Your Bedouin guides will keep tea brewed. Goat and lamb are cooked by nature under the ground until the meat almost falls off the bone.

“[Bedouins] place great importance on having a fire, keeping it alight and making sure they are always ready to make tea and coffee for their guests,” said Allie Astell, who handles the Bedouin Way’s marketing.

Visitors can also get involved in the Bedouin’s daily lives. They can visit locals, find out about handicrafts, and even learn to make Bedouin bread. Bedouin women, Astell said, “are some of the strongest, funniest and feistiest women.”

Noor and Soliman are always ready to discuss mysteries about Bedouins and their lifestyle, even the most sensitive issues.

“We are different,” Noor said. “For example, our women wear black and their work is their home. But they do not mind that. Their utter happiness is having clean homes and cooking the best food.”

The Bedouin Way is not just business to Noor and Soliman, Astell said. The dinners, rents and safaris they do give work to other people as well.

“Last week [Noor] gave work to a driver, cook and oud player who took a newly married Egyptian couple out to the mountains for a romantic private dinner,” she said. “He played for them after the meal. The Bedouin Way made no money from that, but someone else did.”

Sinai is home to more than 30 tribes of Bedouins, each having its own dialect. Most of their ancestors were immigrants who arrived from the Arabian Peninsula between the 14th and 18th centuries. Yet the Bedouin of the St Catherine area have Greek and Roman origins. Eastern Europeans travelled there when the St Catherine monastery was being built between 548 and 565.

Bedouins of Sinai have their own law that governs their internal conflicts. They protect people’s rights, and the final word is always that of each tribe’s leader, called the Sheikh.

The name “The Bedouin Way” was inspired by Noor’s late cousin. He had a website that bore the same name, and in his memory Noor decided to revive it.

“Nasser inspired me so much when I was young and he taught me everything I know about the desert,” Noor wrote on his website. “This was a good way to thank Nasser for everything he did for me.”