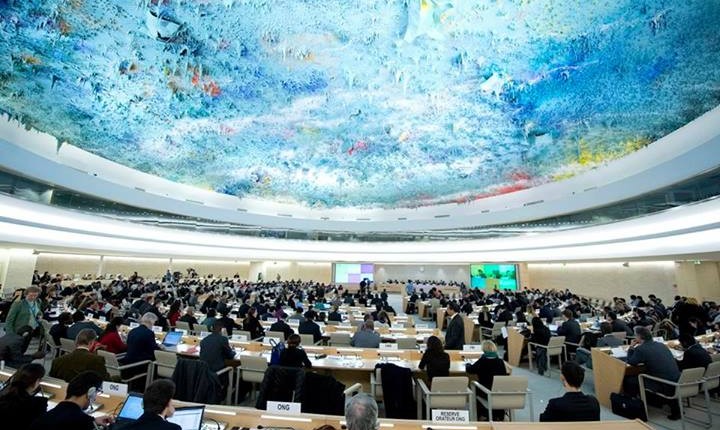 On the first occasion, the CIHRS discussed concerns related to recent “court rulings issued against human rights defenders”. It was representing a coalition of 19 NGOs, it said in a statement on Thursday.

It specifically mentioned the sentence issued against prominent blogger and activist Alaa Abdel Fattah and 24 others, who were sentenced to 15 years imprisonment and fined EGP 100,000. It also raised concerns over the sentence given to activist and lawyer Mahienour El-Massry and eight others to two years in prison and an EGP 50,000 fine. The CIHRS addressed what it described as “mass execution sentences,” referring to two judgments issued by the same court, sentencing 528 and 683 to death in March and April respectively.

“These examples represent a blatant violation of the right to fair trials,” the NGO said.

It said in conclusion that democracy and stability are largely dependent on the judiciary’s impartiality and independence when investigating events of this size and importance.

On the second occasion, the CIHRS addressed media freedoms during elections in the region. It said the electoral processes in Tunisia, Libya, Egypt, Algeria, Syria, Lebanon, Iraq and Yemen prove that the “democratic process” cannot be reduced to the number of voters. The process is linked, in the first place, to the “context surrounding the elections. “

Some of the barriers to a “free and transparent electoral process” are censorship, intimidation of journalists, restrictions on the work of civil society organisations and political violence, CIHRS added.

“Real democracy cannot be achieved unless all rights are respected so that individuals are able to exercise their political and civil rights alike,” CIHRS said.

The UNHRC’s 26th regular session, being held in Geneva, Switzerland, began on 10 June and is scheduled to run until 27 June.