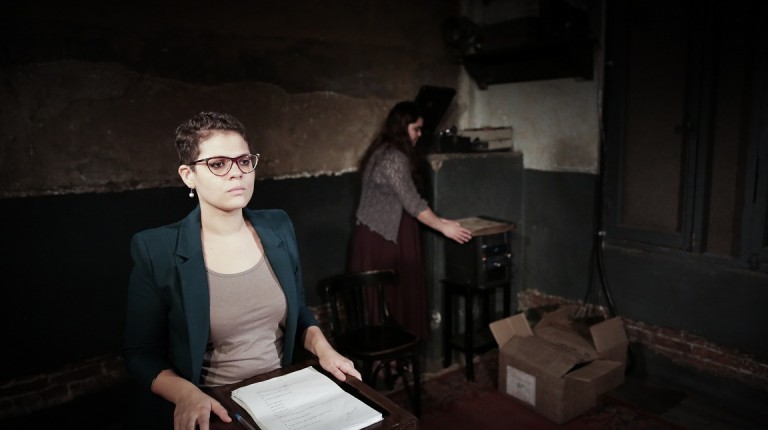 That’s the message Egyptian playwright Laila Soliman illustrates in her latest work, “Whims of Freedom”, which debuted at the Egyptian Centre for Culture and Arts this weekend. Soliman will present the performance, a documentary work exploring Egypt’s 1919 revolution, at the London International Festival Theatre 27 June.

The story features two people. The first person, played by Zainab Magdy, had researched the revolution and World War I using documents from government archives. The second, played by Nanda Mohammed, told the same stories through historic songs and poems from 1919.

During their performance, the actors stressed that what was documented in the state’s archives doesn’t match the story told in art and folk songs written at the time. Magdy presented the state’s official narrative. Through song, Mohammed expressed the people’s feelings.

Mohammed said the two characters don’t only have contradicting opinions, but rather provide a better understanding regarding the truth through different standpoints.

Soliman said the play highlights the similarities between Egypt’s 1919 revolution and current political events, allowing people to understand history through the present.

The piece, which Soliman wrote with Mohammed and Alia Mossallam, is part of a LIFT project called “After a War”. To mark the 100th anniversary of World War I, the festival brought together about 20 international artists to explore the consequences of the war from different angles.

The writers struggled to gather information for the performance because there was “no collective memory” of the First World War, Soliman said. They chose to focus on the 1919 revolution because there was very little documentation about the true situation in Egypt before that time.

Soliman is an independent theatre director and playwright, based in Cairo. She graduated with a degree in Theatre and Arab Literature from the American University in Cairo in 2004.

She has contributed to writing other controversial plays including “No Time for Art”, which is about the realities of living under the military junta that has reigned Egypt for more than 30 years. Another play was “Lessons in Revolting” which was a dance performance that reflects the emotions of the activists and artists during the time of the 25 of January Revolution.