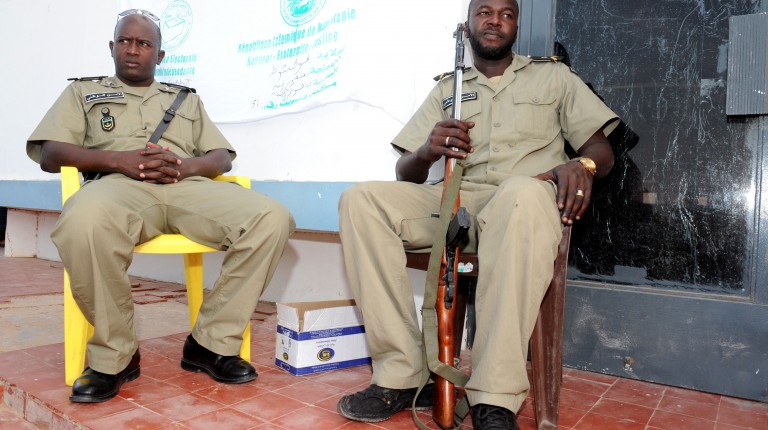 AFP – Mauritanians on Saturday cast ballots in a presidential election that incumbent Mohamed Ould Abdel Aziz was expected to win handily as main opposition rivals boycotted the vote in the largely desert nation.

The ex-army general, who seized power in the northwest African nation in an August 2008 coup, has campaigned strongly on his success in fighting armed groups linked to Al-Qaeda at home and in neighbouring Sahel nations.

Small queues snaked outside several polling stations in the capital Nouakchott before voting got under way at 0700 GMT.

One 70-year old voter, who gave his name as Brahim, said the country, wracked by jihadist violence up until 2010, “had found peace”.

“That’s important and I want it to continue because peace is irreplaceable.”

Kidnappings and attacks by Al-Qaeda in the Islamic Maghreb (AQIM) were frequent when Abdel Aziz came to power, but he boasts he has turned his nation into a regional haven of peace thanks to his reorganisation of the military and security forces.

“The first point where Abdel Aziz’s success is undeniable is indeed that of security and stability in the country, driving away the spectre of the terrorist threat,” said Mohamed Fall Ould Oumeire, managing editor of the daily La Tribune.

The mainly Muslim republic, sandwiched between the west coast of Africa and the Sahara desert, is seen by Western leaders as a bulwark against Al-Qaeda-linked groups.

In 2010 and 2011, Mauritanian troops carried out successful “preventative” raids on AQIM bases in neighbouring Mali, before the armed fundamentalists could carry out planned attacks on Mauritania.

Abdel Aziz has also been heavily involved as head of the African Union in efforts to end conflict in neighbouring Mali, which lost half its territory to Islamic extremists in 2012, prompting a French intervention to free the towns.

He has also mediated between separatist Tuareg rebels and the government in Bamako.

But opposition critics argue that the price of peace has been authoritarian rule and have decided to boycott a vote they regard as an “electoral sham” over the way it is being organised.

Main opposition parties have never accepted Abdel Aziz’s 2009 victory in an election they said was marred by massive fraud.

The ruling Union for the Republic (UPR) won a large majority in parliamentary and local elections last year, which were also boycotted by the opposition.

Casting his vote, Abdel Aziz said he “did not fear a strong rate of abstention” and attacked the opposition, saying: “The reality is that there are certain people who can no longer obtain the results they got in the past.”

The National Forum for Democracy and Unity (FNDU) – an opposition coalition of 11 parties including a moderate Islamist movement – has rallied to denounce Abdel Aziz’s “dictatorial power” and are counting on a high abstention rate.

Abdel Aziz will face four challengers who have highlighted many of the country’s sensitive issues such as complex race relations between black Mauritanians and the dominant Arabs.

The only candidate from the black African south is Ibrahima Moctar Sarr, who argues that non-Arab Mauritanians are “marginalised and victims of injustice”.

Another contender is Biram Ould Dah Ould Abeid, who heads a movement to end slavery which, while officially abolished in 1981, persists as a deeply entrenched practice documented by rights groups.

Himself a descendant of slaves, Ould Abeid proclaims himself “the sole candidate drawn from disadvantaged levels of the people”.

The only female candidate is Lalla Mariem Mint Moulaye Idriss, 57, who has held several administrative posts and seeks support from fellow women and the youth.

While the country, which is nearly as big as Egypt, remains poor, it boasted a growth rate of 6% in 2013. Mauritania has produced oil since 2006 and is rich in iron ore as well as fish caught off its Atlantic coastline.