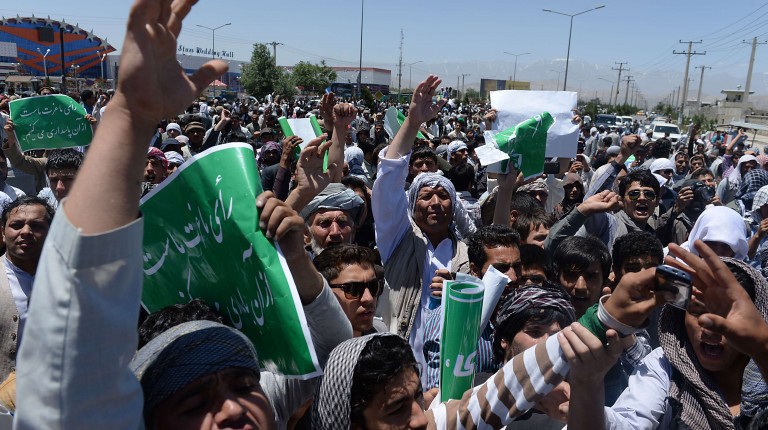 More than 1,000 protesters – far below organisers’ expectations – gathered in the city for the largely peaceful demonstration but the United Nations warned that any street violence “could lead to a spiral of instability”.

Abdullah has boycotted the election vote count, pitching Afghanistan into a crisis as NATO combat troops withdraw from a 13-year war against Taliban insurgents.

Demonstrators took to the streets shouting slogans and carrying banners that read “Fraudsters should be put on trial” and “We will defend our vote to the last drop of our blood”.

“The election authorities are not impartial,” Asar Hakimi, one protest organiser, told AFP.

“All the achievements of the past 12 years are at stake. We will continue protesting if the government and the election commission continue their hostility.”

He said the “anti-fraud” rallies were not organised by Abdullah’s campaign, but the crowds appeared to be made up of Abdullah supporters.

Reports of the ongoing vote count suggest that Ghani has made a surprise comeback after finishing behind Abdullah in the first-round election on 5 April.

Abdullah said he now considers the election authorities “illegitimate” and has alleged that in several provinces there were more votes than eligible voters.

The United Nations, which Abdullah and Karzai have asked to help solve the deadlock, on Saturday urged Afghan security forces to “act with full neutrality and professionalism at this difficult time” and described some social media activity as “disturbing”.

“We would call upon supporters of the candidates to refrain from inflammatory statements, or statements that promote divisive ethnic mobilisation,” UN mission deputy chief Nicholas Haysom told reporters.

The threat of ethnic unrest is a grim prospect for Afghanistan, where tribal loyalties are still fierce after the 1992-1996 civil war.

Abdullah’s support is based among the Tajik minority and other northern tribes, while Ghani is a Pashtun – Afghanistan’s largest ethnic group, which is strongest in the Taliban heartlands of the south and east.

A smooth election was seen as a key benchmark for the US-led coalition that has fought against the Taliban and donated billions of dollars in aid since 2001.

But NATO military operations are winding down fast, and the dispute could wreck claims that a functioning state has been set up in place of the Taliban regime which was ousted in 2001 for sheltering Osama bin Laden.

Abdullah, who has called for his supporters to remain peaceful, believes fraud denied him victory in the 2009 election, and he often said that only a repeat of ballot-rigging could keep him from power this time.

He faced Ghani in the run-off vote after the two came first and second in an eight-man first-round election, when Abdullah was ahead with 45% against Ghani’s 31.6%.

In response to calls for it to play a mediating role, the UN said: “We stand ready to assist… in resolving this political impasse, subject to this [being] an Afghan-led and Afghan-managed process.”

“The task ahead of us is to have the candidates reengaged fully in the election process,” Haysom said. “There is no other way of electing a legitimate leader.”

The preliminary election result is due on July 2 and the final result, after adjudication of complaints, is scheduled for 22 July.

An early morning suicide attack in Kabul targeted Masoom Stanekzai, a senior official at the government body responsible for exploring peace talks with the Taliban.

Stanekzai escaped the blast uninjured, but that one civilian was killed and three wounded.