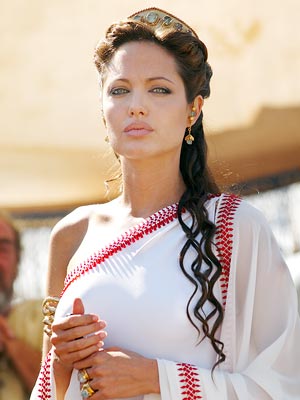 Vivien Leigh’s Cleopatra was coquettish. Elizabeth Taylor’s, sophisticated and cool. Angelina Jolie, who recently confirmed that she will be the next Hollywood starlet to don the Egyptian queen’s headdress, is aiming for more historically accurate.

“Her life story was written wrongly,” she said. “We are trying to uncover the truth about her as a leader and not just a sex symbol – which she really wasn’t. She didn’t have many lovers, maybe only two, and they’re men she had children with.”

Hollywood has been fascinated with Cleopatra since one of the fathers of cinema, Georges Melies, featured her in a short silent film in 1899. The queen, described by Sony Pictures entertainment co-chair Amy Pascal as “the greatest female heroine to ever live”, has since inspired more than 50 movies.

But for all the art, plays, and films the Western world has produced about Cleopatra’s life, “we know surprisingly little about her,” said Maria Wyke, author of book “The Roman Mistress”, which explores the pharaoh’s appearances in cinema.

Almost everything historians know about Cleopatra’s life was written by her enemies, Wyke said.

The story of how Cleopatra seduced Roman ruler Julius Caesar by smuggling herself into his palace rolled up in a carpet – perhaps the most oft repeated narrative from her life – came from a record of the Battle of Actium recorded by her opponent, the Roman general Octavian, Wkye said. Octavian, Caesar’s heir, identified Cleopatra as a threat after the powerful Roman general Mark Antony abandoned his wife, Octavian’s sister, to pursue a long-term romance with Cleopatra, becoming a de-facto step father to the Egyptian queen’s son with Caesar. The historical record frames the battle, which took place on the Ionian Sea, as a “primal struggle between the West and the East, liberty and slavery, republican government and monarchy, and man and woman”.

“To Octavian and his regime, Cleopatra is doubly bad; she is the enemy and she is a female,” Wyke said. “They saw Cleopatra as trying to challenge Rome. They saw her doing it through her sexuality, trying first to seduce Julius Ceasar and then Mark Antony.”

In their records, the Romans offer little context about how the queen worked to promote the safety and security of her people, she said.

“We don’t have a much of a sense of Cleopatra from Cleopatra herself,” she said.

Over the years, film adaptations of Cleopatra’s stories have changed as social attitudes have evolved, Wyke said. In films aired in the early 20th century, for example, the queen was portrayed as a “dangerous man killer” because it wasn’t considered appropriate for women to have a public political role. In the 1930s, after American women were allowed to vote, Cleopatra was given more opportunity to be a ruler who cared about her country, but in the end, she fell on her knees before Mark Antony and confessed that her love for him was greater than her love for her country.

“She says, ‘I’m no longer a queen. I am a woman,'” Wkye said. “There’s a sense that you can’t be both. When she says that, it restores her to the right priorities that she should have as a woman.”

Because the story touches upon fundamental social issues, such as race, gender and power, filmmakers tend to “map contemporary concerns onto the image of Cleopatra,” said Trevor Fear, a professor at Open University who studies the impact of Cleopatra on audiences.

“Cleopatra and our response to her very much becomes a barometer by which we measure ourselves,” he said. “It also inevitably means that responses to her vary and change depending on a society’s attitudes – she can be seen negatively as disrupting ideological norms, or positively for the very same reasons.”

The latest film is an adaptation of Pulitzer-Prize-winner Stacy Schiff’s nonfiction book, “Cleopatra: A Life,” which paints a more nuanced version of Cleopatra than has historically lit up the silver screen.

Jolie said she had always envisioned Cleopatra as “very glamorous”. Ancient sources say the queen dressed up as the goddess of love, sailed in a perfumed boat, and served drinks made from pearls.

“Then I read her story and found a different side to her – that she was a mother, leader, and an intellect who spoke five languages,” she said. “All of that is more interesting than what she is summed up to be.”