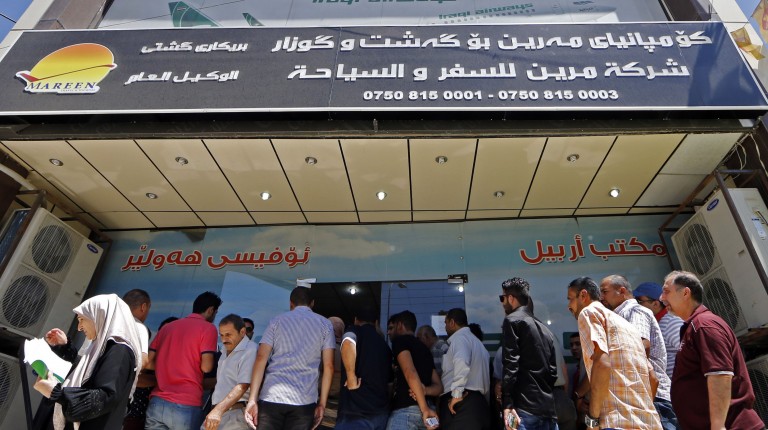 AFP – In the two weeks since it was seized by Sunni militants, some residents of the northern Iraq city of Mosul feel the clock has been turned back hundreds of years.

The militants, led by the Islamic State of Iraq and the Levant (ISIL) jihadist group, have begun imposing an extreme interpretation of Islamic law in the days since they took the city, residents reached by telephone told AFP.

“These militants will return us and our country hundreds of years backwards, and their laws are the opposite of the laws of human rights and international laws,” said Umm Mohammed, a 35-year-old teacher.

“We live in continuous fear of being subjected to new pressures,” she said. “We are afraid of being prevented from working and contributing to building the community.”

The city, known before 2003 for its historic sites and parks and in later years as a hub for deadly violence, fell on 10 June to the militants, who subsequently overran surrounding Nineveh province and swathes of other territory.

Security forces in Mosul, a city of some two million people before the offensive, wilted in the face of the onslaught, in some cases abandoning uniforms and even vehicles in their haste to flee.

After seizing control, gunmen declared Nineveh a part of their Islamic state and issued a document outlining new rules.

The 16-point document announced the prohibition of the selling and consumption of alcohol and drugs as well as smoking, and forbade gatherings and carrying weapons.

Women are to wear non-revealing clothes and keep to their homes, while “shrines” are to be destroyed.

All depictions of people are considered idolatrous under the militants’ extreme interpretation of Islam, and gunmen have removed various statues from the city in recent days, including some depicting famous poets.

Abu Ramzi, one of Mosul’s Christians who did not flee the city, said militants destroyed a statue of the Virgin Mary in front of a church.

“We have not received any threat from any side yet,” Abu Ramzi said. “We will not leave our houses and city even if they slaughter us.”

The militants also distributed a document to mosques in the city ordering that they not make or publish any statement not approved by ISIL, and designated a specific mosque for the acceptance of the “repentance of apostates”.

ISIL has also appointed representatives for different areas of the city who are to conduct a survey of its residents.

One resident who fled said a neighbour told him that gunmen came to check empty houses in the area and find out who owns them.

“They asked about my house, my [religious] sect and my phone number,” he said.

The gunmen left a message that he had two days to return and renounce his Shi’a faith, or the house would be burned.

Militants are deployed in most areas of Mosul, some on foot and others moving either in civilian vehicles or those captured from security forces when they withdrew, one resident said.

Some wear civilian clothes, while others dress in military uniforms or black.

The militants, some of whom mask their faces, are armed with a variety of weapons, including Kalashnikov assault rifles and pistols.

There is a major electricity shortage in the city, and fuel is also in short supply, with hundreds of people waiting for hours at petrol stations to fuel their cars and trucks.

But not all residents of Mosul view the militants in a negative light.

“The gunmen in Mosul are decent people, they are treating the residents well,” said Umm Abdullah, a woman who was among half a million people who fled the city in the wake of the militant takeover.

“To be honest, I’m happy they took control of Mosul. I see them as rebels, not gunmen, and I think they will make the city better.”

But another resident, Abu Ali, 40, said that the city has just moved from restrictions by Iraqi security forces to others by the militants, who are imposing “a new style of life on us”.