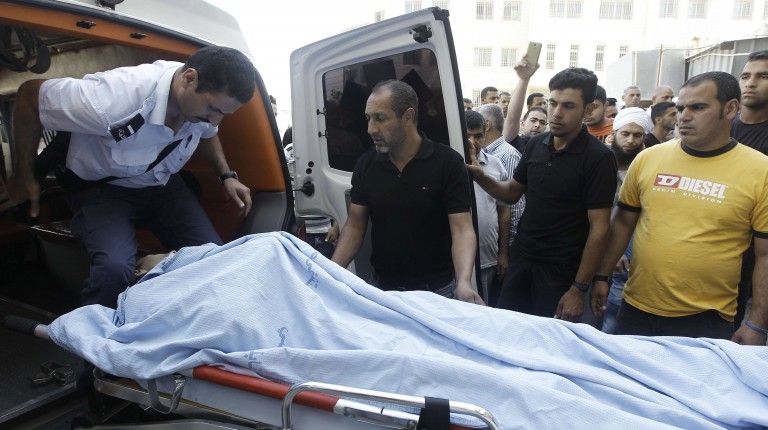 AFP- Israeli troops shot dead two Palestinians in the West Bank early Sunday in separate clashes that erupted as they made more arrests in the hunt for three missing teenagers.

Their deaths raised the number of Palestinians killed to four, since the Israeli army began a massive search for the three young students who disappeared on 12 June while hitchhiking in the southern West Bank.

Israel accuses Hamas militants of kidnapping them, and has said the objective of “Operation Brother’s Keeper” is to bring them home safe while dealing a crushing blow to the West Bank infrastructure of its Islamist nemesis.

So far, the army has arrested more than 340 Palestinians, around two thirds of them members of Hamas.

The teens’ seizure has been condemned by Palestinian president Mahmud Abbas, who on Sunday questioned why Israeli Prime Minister Benjamin Netanyahu had not condemned the bloodshed triggered by the manhunt.

“I said the kidnapping was a crime, but does that justify the killing of… Palestinian teens in cold blood?” Abbas asked in an interview with Haaretz newspaper, referring to the deaths of two young Palestinians earlier this week.

“What does Netanyahu have to say about the killings? Does he condemn it?”

Abbas also said he has seen no concrete evidence of the Islamist group’s involvement, saying: “I have no credible information that Hamas was behind the kidnapping.”

But Netanyahu insisted Israel had “unequivocal proof” that Hamas was behind the youths’ disappearance.

“Soon this information will be made public,” he told ministers at the weekly cabinet meeting.

He also referred to comments made by Abbas on Thursday in which the Palestinian leader pledged to hold those behind the kidnapping “accountable”, and said there would be no new armed uprising against Israel.

“His remarks will be tested not only by actions to return the boys home but by his willingness to dissolve the unity government with Hamas, which abducted the youths and calls for the destruction of Israel,” he said.

Israel has seized on the opportunity presented by the operation to try to rupture a reconciliation agreement between Abbas and Hamas, which saw the two sides recently agree on an interim government of independents, infuriating Israel.

Netanyahu also appeared to address Abbas’s remarks on Palestinian casualties, insisting that Israel did not intend to harm anyone.

“This effort involves a certain amount of friction with the civilian population in Judaea and Samaria (the West Bank) and we have no intention of harming anyone,” he said.

“But our forces are acting as necessary for self-defence, and from time to time, there are victims or casualties on the Palestinian side as a result.”

With the search in its 10th day, troops in Nablus shot dead 27-year-old Ahmed Fahnawi as he was on his way to pray while clashes were taking place.

Palestinian security sources said he was hit by four bullets, while family members told AFP he was mentally challenged.

The army confirmed firing at a man who approached troops “in a threatening manner”, saying he had failed to respond to warning shots.

It said the man appeared to be “mentally unstable”.

Shortly after the soldiers left, Palestinians began hurling rocks at a local police station in the city and smashed the windows of two police cars, an AFP correspondent said.

The Israeli search has sparked growing Palestinian frustration with their own security forces who are cooperating in the hunt for the teenagers, in a move defended by Abbas as necessary.

Earlier this week, troops shot dead Ahmad Arafat Sabarin, 19, and Mohammed Dudin, 14, and a third youth, aged 20, was left fighting for his life in an Israeli hospital.