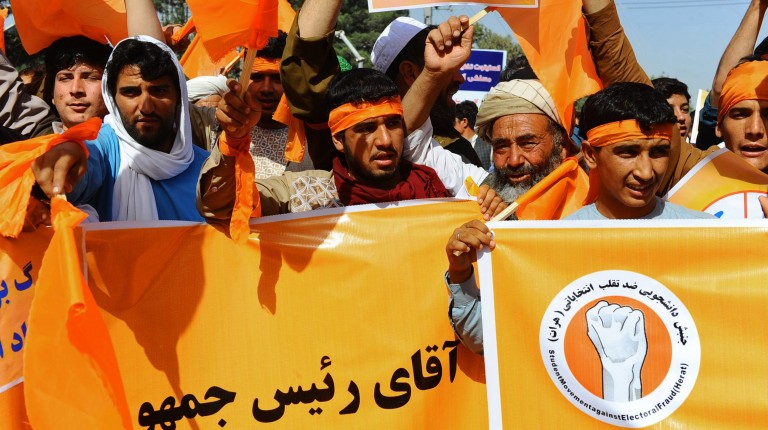 AFP – Hundreds of supporters of Afghan presidential candidate Abdullah Abdullah held protests over alleged electoral fraud for a second day across Kabul Sunday, as a political stalemate deepens in the country.

The protesters, some of whom gathered by the presidential palace, chanted “long live Abdullah” and called for the death of Afghanistan’s electoral commission chief, who is handling fraud allegations relating to votes cast in the election’s second round.

A similar-sized gathering in Herat, western Afghanistan, saw a group largely composed of students burn their voter registration cards in protest against alleged irregularities in the contest between Abdullah and rival Ashraf Ghani.

Abdullah has boycotted the election vote count, pitching Afghanistan into crisis as NATO combat troops withdraw from a 13-year war against Taliban insurgents.

The former foreign minister has alleged that the turnout figure of seven million in the 14 June run-off was exaggerated, and that in several provinces there were more votes than eligible voters.

Sunday’s protests came a day after more than 1,000 of Abdullah’s supporters marched through Kabul in another largely peaceful demonstration.

The two days of “anti-fraud” rallies were not organised by Abdullah’s campaign, but the crowds appeared to be made up of Abdullah supporters.

Asar Hakimi, an activist who was one of the main organisers of Saturday’s protests, said Sunday’s protests seemed to have started spontaneously, and that his pro-democracy group was to hold a meeting aimed at co-ordinating ongoing direct action.

“We will be discussing the ongoing situation of our movement, how to stop rallies turning violent,” he said.

The United Nations, which Abdullah and Karzai have asked to help solve the deadlock, on Saturday urged Afghan security forces to “act with full neutrality and professionalism at this difficult time”.

“We would call upon supporters of the candidates to refrain from inflammatory statements, or statements that promote divisive ethnic mobilisation,” UN mission deputy chief Nicholas Haysom told reporters.

The threat of ethnic unrest is a grim prospect for Afghanistan, where tribal loyalties are still fierce after the 1992-1996 civil war.

Abdullah’s support is based among the Tajik minority and other northern tribes, while Ghani is a Pashtun – Afghanistan’s largest ethnic group, which is strongest in the Taliban heartlands of the south and east.