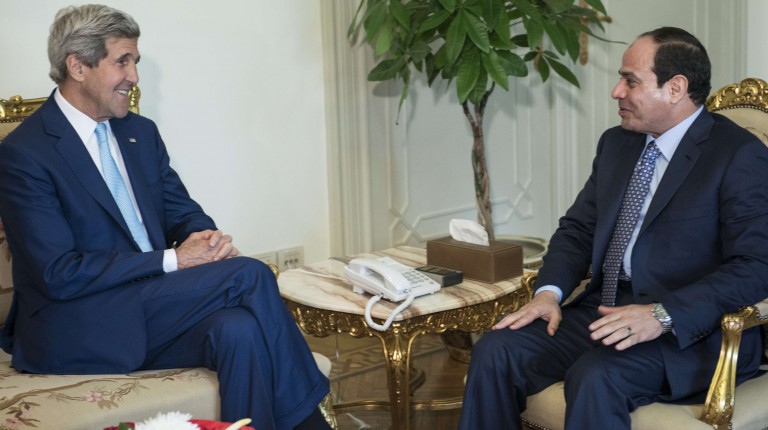 John Kerry made his first visit to Egypt since November, accompanied by the news that an instalment of military aid had been delivered, the first since the freeze last October.

Speaking at a press conference on Sunday with newly appointed foreign minister Sameh Shoukry, Kerry said: “[The US] is committed to seeing Egypt succeed and the people of Egypt to succeed”.  Both he and Shoukry expressed their commitment to the “historical” and “strategic” relationship between their two countries.

Kerry also said the US is committed to assisting Egypt in other areas, highlighting the economy and “confronting shared threats of terrorism and extremists”. He added that Apache helicopters that were delayed by the military aid freeze would soon be delivered and be used in the Sinai, where the Egyptian Armed Forces are conducting an ongoing operation to combat militancy in the volatile peninsula.

Kerry said his conversation with Al-Sisi was “candid and comprehensive” and they discussed a range of regional and international issues.

The secretary also expressed concern for the “spill over” effect, referring to on-going instability in Libya and Iraq. He and Shoukry discussed the situation in Libya

Kerry discussed a range of issues with Al-Sisi including the situation for Al Jazeera journalists on trial and recent mass death sentences, the most recent of which was handed down on to 183 on Saturday morning.

The Al Jazeera journalists are expected to hear a verdict for their case on Monday. They are facing charges of spreading false news and “creating a terrorist media network”.

Kerry acknowledged progress in Egypt, highlighting Al-Sisi’s call to review human rights legislation. He said that Al-Sisi gave him a “strong sense of his commitment” to follow through on this process and to look at Egypt’s judicial procedures.

The secretary said that after his meetings on Sunday both sides acknowledged there is “a lot of work to do together” adding that they are “on a similar page”.

Ten days before his visit $572m of military aid was released, said one of the state department officials. This is the first instalment since the US decided to freeze delivery pending steps towards a democratic transition.

Despite this, an official said: “[Kerry] will make clear there are certain requirements the Egyptians need to meet in order for the additional certifications to be made”. The official added: “It’s not just about an election; it’s the steps they take from here”.

The total amount of US military aid allocated to Egypt for the 2014 Fiscal Year is $1.3bn, the remainder of the aid is yet to be approved for release by the US congress.

The background briefing also noted the release of Al-Jazeera journalist Abdallah El-Shamy, who was held without charge for over 300 days and the recent issuance of a law to combat sexual harassment.

In his meeting with Foreign Minister Shoukry, the pair discussed regional issues such as the situation in Iraq and Libya, the Syrian conflict and the Middle East peace process. Kerry stressed in the meeting, the “importance” of the continued “strategic relationship” for the region and “common threat of… terrorism”, according to the ministry spokesman.

Cairo is Kerry’s first stop on a tour of Europe and the Middle East during which he is expected to meet the US’s Gulf allies and European officials to discuss the situations in Ukraine, Iraq and Syria.