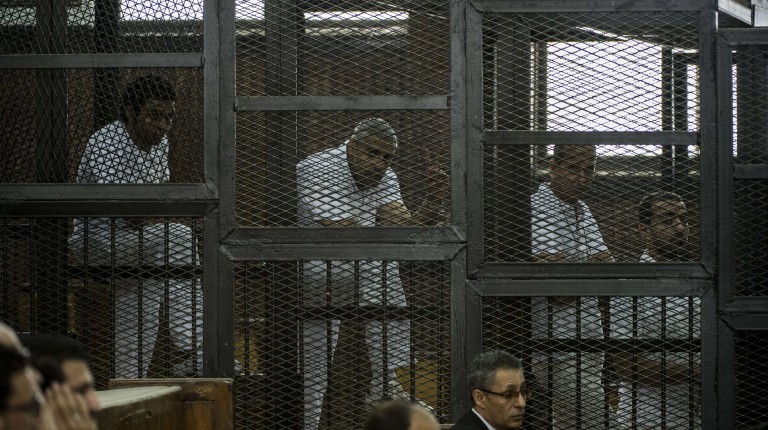 A verdict in the case of five Al-Jazeera journalists, three currently in detention, is expected on Monday after multiple delays in the case.

Accused of a litany of terror-related charges, the trial, begun on 20 February in the Cairo Criminal Court and held at Tora Prison, will continue on Monday for its 13th session.

Since it commenced, repeated postponements have delayed the trial, attributed to a number of reasons, including technical difficulties with audio and visual evidence. and the lack of a translator for a non-Arabic speaking defendant.

Of the 20 defendants in the case, only nine have appeared in court. The other defendants to appear in the courtroom are five students who claim to have not been acquainted with the Al Jazeera journalists before the trial, and one man running an Islamic charity organisation. Eleven others are being tried in absentia.

Dubbed the “Marriott Cell” by the prosecution, Al-Jazeera’s Cairo bureau chief Mohamed Fadel Fahmy, correspondent Peter Greste, and producer Baher Mohamed are accused of spreading false news to harm Egypt. They also stand accused of creating a “terrorist media network”.  Fahmy and Greste were arrested at the Zamalek Marriott Hotel on 29 December after police raided two hotel suites the journalists used as a base of operation. Mohamed was arrested the same evening from his home in suburban Cairo.

The five students, accused of being Muslim Brotherhood members, were arrested on 2 January from an apartment in Cairo’s Moqattam neighbourhood.

Greste, an Australian, is one of four foreign defendants named in the case. The others, being tried in absentia, are Sue Turton and Dominic Kane, who have previously worked for Al-Jazeera in Cairo. Dutch journalist Rena Netjes is also a defendant, but has never worked for Al-Jazeera, and was allowed to leave Egypt following discussions between the Dutch embassy and the foreign ministry.

Ibrahim Abdel, deputy to Famy’s lawyer Khaled Abu Bakr, said that “the verdict is difficult to predict,” adding that his team is “hoping for the best.”

Both the investigation and the prosecution have made mistakes, according to Abdel.

Initially, the investigators referred to Fahmy, Greste and Mohamed as member of the controversial Al JazeeraMubasher Misr, when, in fact, the trio is employed by its sister channel Al Jazeera English.

“The prosecution made a mistake when they combined defendants accused of being members of the Muslim Brotherhood, with the journalists” said Abdel, “when most don’t know each other.”

Describing his last visit to his client Fahmy, he said Fahmy was “very worried and thinking a lot.” Abdel said that in the last session, Fahmy told the judge in the case that, “he trusted in the judiciary, and he is awaiting his acquittal.”

“The trial has been an ordeal for our family,” said Mike Greste. “We are hopeful that the court will find him innocent, but we’re also mentally prepared for the worst.”

In repeated statements, Al-Jazeera has defended the innocence of its journalists, saying the trial has been plagued by falsehoods and inconsistencies.

The prosecution, on multiple occasions, aired video footage that was unrelated to Egypt, showed clips from networks other than Al-Jazeera, and played sound recordings that were inaudible, presenting it as evidence.

On another occasion, three audio/visual witnesses for the prosecution were unable to recall the footage presented to them by the investigators. They could not identify if the footage constituted a crime, and one witness directly contradicted his written affidavit and indicated the prosecutor added additional footage after it was viewed by the witnesses.

“…the weaknesses of the prosecution case has been exposed,” said Al-Jazeera, “On the balance of arguments, Al-Jazeera hopes the judge will take into consideration the facts presented to him and acquit Peter, Baher and Mohammed of any wrong doing. On 23 June, the entire world will be watching Egypt to see whether they uphold the values of press freedom”

“This is not a trial of for these defendants alone – this is a trial of all journalists,” said Abu Bakr in his closing comments

In a separate case, after 306 days in prison without charges and 147 days on hunger strike, Al-Jazeera Arabic journalist Abdallah Elshamy was released from prison on 17 June. Elshamy was arrested while covering the violent dispersal of the pro-Mohamed Morsi sit-in at Rabaa Al-Adaweya Square last August.

In previous interviews, Al-Jazeera said it no longer has staff members based in Egypt.